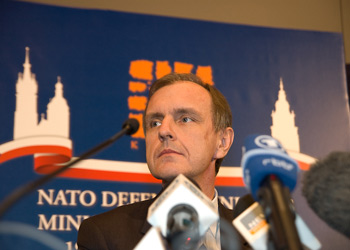 It seems that Polish hopes have been dashed two-fold recently. During talks in Brussels, Polish Defence Minister Bogdan Klich was told that Poland will not receive MRAP-type vehicles, and while they will receive the promised Patriot missiles, the missiles will be unarmed.

The MRAP-type vehicles, or Mine Resistant Ambush Protected vehicles, are specifically designed to survive attacks from IEDs, which have been the most dangerous to coalition troops in Afghanistan. The vehicles, weighing in at over 14 tonnes, have significantly reduced the number of deaths since their introduction to the war in Iraq, and the Polish military had hoped to protect its soldiers in Afghanistan through their use.

For now, Polish soldiers in Afghanistan will continue to use MRAPs borrowed from the American military, as well as the Polish-made KTO Rosomak (Kołowy Transporter Opancerzony, or Wheeled Armored Vehicle) that is already in use.

After the meeting with his American counterpart Robert Gates, Minister Klich explained that “The Americans at the moment have their own substantial needs, and these additional vehicles, which are being transferred to Afghanistan, will be used primarily for personal use.”

In that same meeting, the Polish defence minister was also told that while Poland will receive the 10 Patriot missiles as promised by the Declaration on Strategic Cooperation signed in August 2008, they will not be armed.

Originally, the Patriot missiles were meant to be a key part of Poland’s defensive arsenal and a part of the missile shield deal. However, according to information leaked to journalists from the American side, Defence Minister Gates was to tell Klich that the Patriots are only meant to be used for training purposes, and therefore do not need to be armed. This has thrown even more speculation on whether or not the missile shield plan will be actualised.

The Patriot missiles are still scheduled to arrive by the end of this year, regardless of whether or not the Obama Administration decides to implement the missile shield plan.