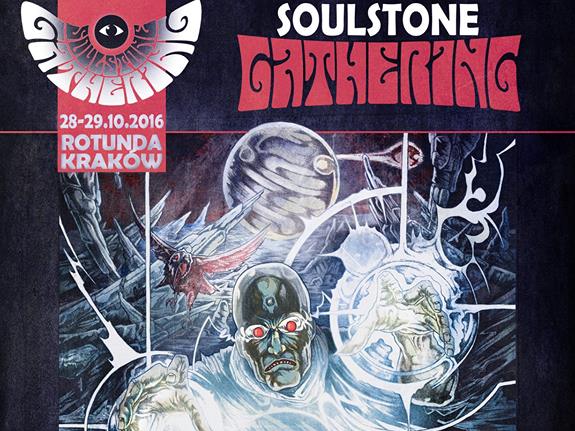 Stoner rock or stoner metal or doom metal (and yes, there are distinctions between each, although they are lost on all but the most ardent fans) has really taken off in the last few years as an alternative for those who still like their guitar riffs heavy and distorted and drums big and loud but can’t wrap their heads around the lack of melody and Cookie Monster vocals that often accompany the newer heavy rock of the last decade or so. The SOULSTONE GATHERING FESTIVAL is bringing the best of the genre into town for two days of good old fashioned Heavy Metal Bliss.

Half of the artists are Polish, but only the accents would allow you to deduce who’s who – on the surface, there might not seem to be a whole lot of difference between these bands. But to the folk who live for this stuff, that’s a moot point.

Sure, at first glance, you could be forgiven for thinking Greece’s 1000MODS, Hungary’s APEX & THE PEA, and Poland’s RED SCALP and PALM DESERT are the same guys; all combine a simple fuzztone riff, a bottom heavy beat that rarely leaves 4/4, and vocals that seem like an afterthought, all played in the (detuned) key of E (or sometimes A.)

But some artists stand out. France’s MARS RED SKY add a serious lysergic dose of psychedelia, while GORILLA MONSOON, from Germany, take the stoner template and add a bit of sludge and American southern rock to the mix.
But most interesting are the three (!) creative instrumental bands on the bill. It takes a certain artistic integrity, not to mention just plain guts, to commit to the uncommercial idea of music sans verses and choruses, and it takes very talented musicians to pull it off, but these artists have no problem. Of the three, MAJOR KONG (from Lublin, Poland) are the closest to classic stoner rock, although (for those keeping score) they’re actually more doom metal. The wonderfully-named THE GENTLE ART OF COOKING PEOPLE have more of a psychedelic vibe, but Gdynia’s AMPACITY are truly the ones not to miss. Their music defies easy categorization, but it runs the gamut from progressive and space rock to fusion to metal, and they have a sound palette far beyond that of the other artists.
But even though there are stylistic similarities between some of these acts, they each bring something unique to the genre for those that live for The Big Heavy Riff. As metal went through its many permutations – math metal, nu-metal, technical metal, etc. – the music may have lost its soul for some, as it wandered further and further away from its 1970s/Black Sabbath roots. This “stoner” movement is bringing back the soulfulness of the righteous riff, and for that, many (including yours truly) are thankful.

From the beauty of Ireland’s County Armagh to the musical Mecca that is Nashville, Tennessee, Ben Reel has made a name for himself as a singer-songwriter of note. No less a personage than Van the Man himself (that would be Morrison) has called Ben his favorite songwriter. Van is not one given to hyperbole, so as endorsements go, they don’t come much better. He plays a bluesy kind of folk where rock, soul, and Americana influences abound, and he’ll be playing in three different band configurations at three different venues around town. He may be just an album away from following in fellow Irish songsmith Glen Hansard’s footsteps into much bigger venues, so this could be your only chance to see him in such intimate surroundings, especially in so many different and unique musical settings.

Mike Watt is a force of nature, and then some. As the bassist in the legendary Minutemen, he was one of the architects of the second wave of American punk rock that rose from Southern California at the dawn of the Reagan era. After the death of guitarist/vocalist D. Boon, he formed fIREHOSE, who were arguably as influential to the 1990s alternative scene as his first band was to punk. With such a pedigree, he could perhaps be forgiven for resting on his laurels a bit and spending the rest of his career basking in the well-deserved respect of his peers and the next generation of musicians. But Watt has never stopped – at least not for long.

For instance, the initial US tour for the second album Canto Secondo by his latest project IL SOGNO DEL MARINAIO encompassed an inhuman 53 shows in as many days across the continental USA. Now they’re on to Europe, and this show falls in the last week of the 32 consecutive shows from 28th September to 29th October. This is the kind of dedication that is admirable in 20 year-olds – it’s kind of super human for musicians of Watts’ age and experience.

The music is a completely unique melting pot of rock, funk, jazz, punk, spoken word, and… you name it, it’s in there. Watt may not be known outside of a group of musical devotees, but in terms of influence, he is a giant.

If you are looking for an inexpensive primer into the world of Polish punk during the communist 1980s, here it is. British and American punk musicians like to boast of the courage it took to play their music in the era of Zeppelin, Elton, and Queen, but compared to these guys, they’re freaking Abba. Not some bogus conspiracy theory crap – these artists often literally operated under threat of the government!

The origins of all four of these bands goes back as far as 1980, and although there have been numerous personnel changes along the way, this show is both a salute to Polish musical history and a testament to social Darwinism; these are true survivors.

MARIA PESZEK is that very rare singer-songwriter who has managed the seemingly impossible task of having multiple chart-topping platinum successes with very personal and often controversial material. Personal demons, mental illness, and, most of all, criticism of government and the Church all figure heavily throughout her four albums, and a certain world weariness in the compositions and performances give her a gravitas and authenticity rare in mainstream pop.

If you weren’t able to catch The Cure in Łódź, here’s a chance to witness another Goth legend. Their new album, Another Fall From Grace, is being called a sequel of sorts to the 1986 classic God’s Own Medicine – to be honest, it doesn’t reach quite those same dizzy heights, but like all Mission albums has a number of excellent songs. With 3/4 of the classic lineup in place (guitarist Simon Hinkler, bassist Craig Adams, and of course, the ubiquitous Mr. Wayne Hussey), this is the band’s 30th anniversary tour, and the set changes nightly, but always includes many surprises alongside goth standards such as “Wasteland,” “Deliverance,” and “Butterfly on a Wheel.”