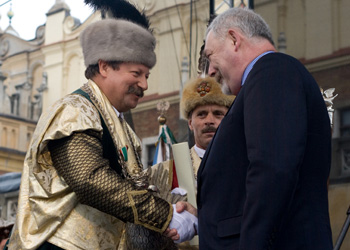 Krakow is a city that’s quite proud of its traditions, and perhaps one of the most interesting ones is the annual coronation of the Fowler King.

Dating back to the 13th century, the Fowler Guild once protected the medieval city, and its members were responsible for training other guild members in defence tactics, particularly shooting. Also called the Shooting Confraternity, the Fowler Guild held an annual shooting competition; the best shot then became the Guild’s king for the year.

The tradition has continued for over 700 years, and this year’s coronation ceremony took place on the Market Square on Saturday, 6 June. Last year’s king, Czesław Dźwigaj, ceremoniously passed the Silver Fowl (which was originally presented to the Guild by Kind Sigismund Augustus in 1565) to the new king, Jan Okoński. Mr. Okoński, a businessman also involved in local politics, revealed proudly that he was actually the first member of his family to shoot his way to the crown.

One of the more prominent guests present at the ceremony was Krakow Mayor Jacek Majchrowski, who spoke briefly about the importance of upholding the city’s traditions. Then after a ceremonial drink of honey liquor by the guild’s members, the junior Fowler King was crowned as well.