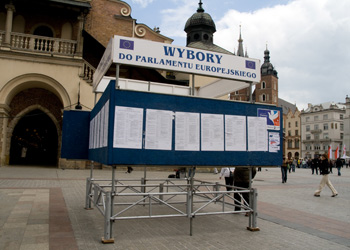 The outcome of the 2009 elections for the European Parliament resulted in a swing to the right, although some concern for environmental problems and the quest for sustainable energy gave green parties a modest win. But the big winners within the European Union (EU) were the (mostly) right wing independents, such as in the United Kingdom, the Freedom Party in The Netherlands and the Czech Civic Democratic Party.

In Poland the Civic Platform (PO) and the People’s Party (PSL), which together form the national coalition government, were rewarded by the Polish people (almost 52 percent, against 49 percent and a slim majority in seats at the last national parliamentary elections in 2007) who turned out at the voting bouts far below the European turnout average. Where 43 percent of Europeans cast their vote, only 24 percent of the Polish public did. Still, it was a four percent increase compared to the last European elections in 2005.

The European left lost its majority. The combination of left, green and liberal democrats that got 51.1 percent of the vote in 2005 has now been overtaken by a centre right wing majority that scored 55.7 percent. And so for the first time, the Euro-cynical, the Euro-sceptics and the Euro-opponents, the very ones that would like to see the power of the House they all get a seat in decreased, are going to play a significant role on the European stage.

Turnout
The turnout at these elections again went down, from a 45.5 percent turnout rate in 2005, to 43.1 percent in 2009. The European Parliament website emphasizes that with a larger number of member states, turnouts are automatically going down. In that perspective, the turnout can be described as stable compared to the elections in 2005, with only a two percent drop.

The highest turnouts were traditionally in Belgium and Luxembourg, exceeding the 90 percent threshold in both countries. The Belgians, struggling with their own institutional state and economy, have now put all hope on the EU in Brussels, as their inactive government isn’t able to move forward or backward at the moment, due to a 15-month long political and institutional crisis.

The lowest turnouts were registered in Slovakia (19.6 percent) and Lithuania (20.9 percent). Slovakia has timed the change of its currency to the euro perfectly, and has therefore not yet been struck by the economical crisis as much as surrounding countries have. For Slovaks, this element of satisfaction led to a low turnout. In Poland, the lack of issues, the internal struggles within the opposition to give the coalition parties a real hard time and the perception of many Poles that Brussels is simply is too far away (a phenomenon also known as “democratic distance” or “democratic gap”) led to a huge disinterest for these elections.

Issues
Although all countries have their own national issues and separate views on Europe, a couple of common European issues are to be found.

First there is the Lisbon Treaty, which aims to replace the cancelled European constitution. Since this document has been ratified (except by the Republic of Ireland) the hot and controversial topic has disappeared from the European agenda.

Second, the international economic crisis. The debate between whether member nations should solve their own economic woes, or if this crisis needs a continental approach, appears to now lean towards the latter, making the crisis no longer the central issue. Neither did the issue of environmental policies nor the common quest for sustainable energy appear in the spotlight, which explains why the greens could celebrate a small electoral victory. It is clear that the people think that both the economy and environment should be dealt with on a continental scale.

But the swing towards the right does indicate what many people disagree upon in Europe: the topic of size, influence and expansion. The swing to the right shows that a focus on the economical union, rather than the political one is desirable. Which also means that the EU’s role as a legislative institution has become inferior to its economical and financial one.

The rapid expansion towards the east of the EU has been seen as weakening the overall European economy, according to some right wing factions. Which is why further expansion will be put on hold for at least a decade, if it is up to these parties. This would shut the door to candidate states Croatia and Iceland, two countries desperate to join the EU because of the global economic crisis. For Turkey, access to the EU becomes almost impossible, since most right wing factions are against Turkish membership, now or ever.

So overall, the swing to the right could be seen as a call for emphasis on economic issues and a freeze of the expansion of the EU, both legislative and in size. Many blame the rapid expansion since 2004 (12 new member states since), the sub-sequential labour migration towards Western Europe and unemployment issues that followed even before the financial crisis kicked in and are therefore fed up with the constant increasing Europe as a political union, that some mistakenly call a “super state.”

Poland
In Poland, however, this was less of an issue. Leading parties like the Civic Platform (PO) and the Law and Order party (PiS) agree that Europe’s first and foremost role should be an economic one, mainly because it has proven to be beneficial for Poland. So in Poland, from a European perspective, there was not as much to fight for, although the Civic Platform belongs to the European Democrats, whereas the Law and Order party belongs to the Union of European Independent States. The issues were mostly filtered through a lens of of national political matters.

On a national scale, the opposition lead by the Law and Order party had to deal with internal struggles within the party and the bad publicity that followed as a consequence. Also, the economic crisis and the fall of the Polish złoty has increased somewhat the call for the euro, especially now that neighbour Slovakia sees the benefits of belonging to the continental monetary system. This is being strongly supported by the ruling Civic Platform, whereas Law and Order are more sceptical. It is probably this that has brought the government a slight electoral victory, which remained a limited win due to the low turnout. Polish Prime Minister Donald Tusk has also been seen as a man who is handling the economic crisis in a satisfactory manner. The electoral win could therefore also be seen as a reward for the current coalition, government and prime minister.

Trends
Poland did not follow the main political trend in Europe, but that conclusion could be argued because of a low turnout. The picture could have looked quite different with a higher turnout. Also in France and Germany, the centre-right governments were rewarded with electoral wins. But the common trend was a vote against national governments and a vote for outspokenness: right wing parties that are Euro-sceptical and green and progressive parties that are outspokenly pro-European are clearly on the rise.

Italian Prime Minister Silvio Berlusconi said during the campaign that he doesn’t want a multicultural Italy and would like to see the European integration be put on hold. It got him the vote and a remarkably large win over the left-centre opposition. The United Kingdom saw the ruling Labour party’s influence diminished. However, the opposition Conservative Party could not take full advantage because it lost a lot of votes to the United Kingdom Independent Party and the British National Party.

However, in the Czech Republic the vote was a clear one against the centre-right government. Both the pro-European left wing social democrats, as well as the anti-European right wing Euro-sceptics have won significantly and the same trend was seen in The Netherlands, were anti-Islam politician Geert Wilders noted a big win, but so did the outspoken pro-European Progressive Democrats and Green and Left Party. It was the vague, co-governing social democrat party that lost more than 50 percent of its support. Outspokenness, either in favour or against Europe, was rewarded.

But overall, the signs are clear. European citizens are feeling the growing pains of the quickly growing Union and would like to halt that growth. On the other hand, they are experiencing the global economic crisis and would like to see that solved as quickly as possible. This uncertainty, lack of economic growth and welfare usually causes a swing to the right and a loss for the left, green, or progressive parties.

But this swing shows something else, because one could state that the pro-Europeans have also won slightly though not as much as the Euro-sceptics. More and more voters are finding far wing factions, which are outspoken left or right wing. This hollowing of the political centre is a threat for every political institution and so it also is with the European Parliament and that can be seen as one of the big losses of these elections. A low turnout combined with a “wing swing” are the worrying symbols of the current European democracy.

But experts say this will likely correct itself when prosperity, welfare and economic growth set back in. What won’t change is the low turnout and that in itself already threatens the fundamentals of the EU as a political union. Turnouts, especially in Poland, need to increase to give the European Parliament a democratic mandate. Without it, the right wing factions already have won, even without going to the electoral bout.