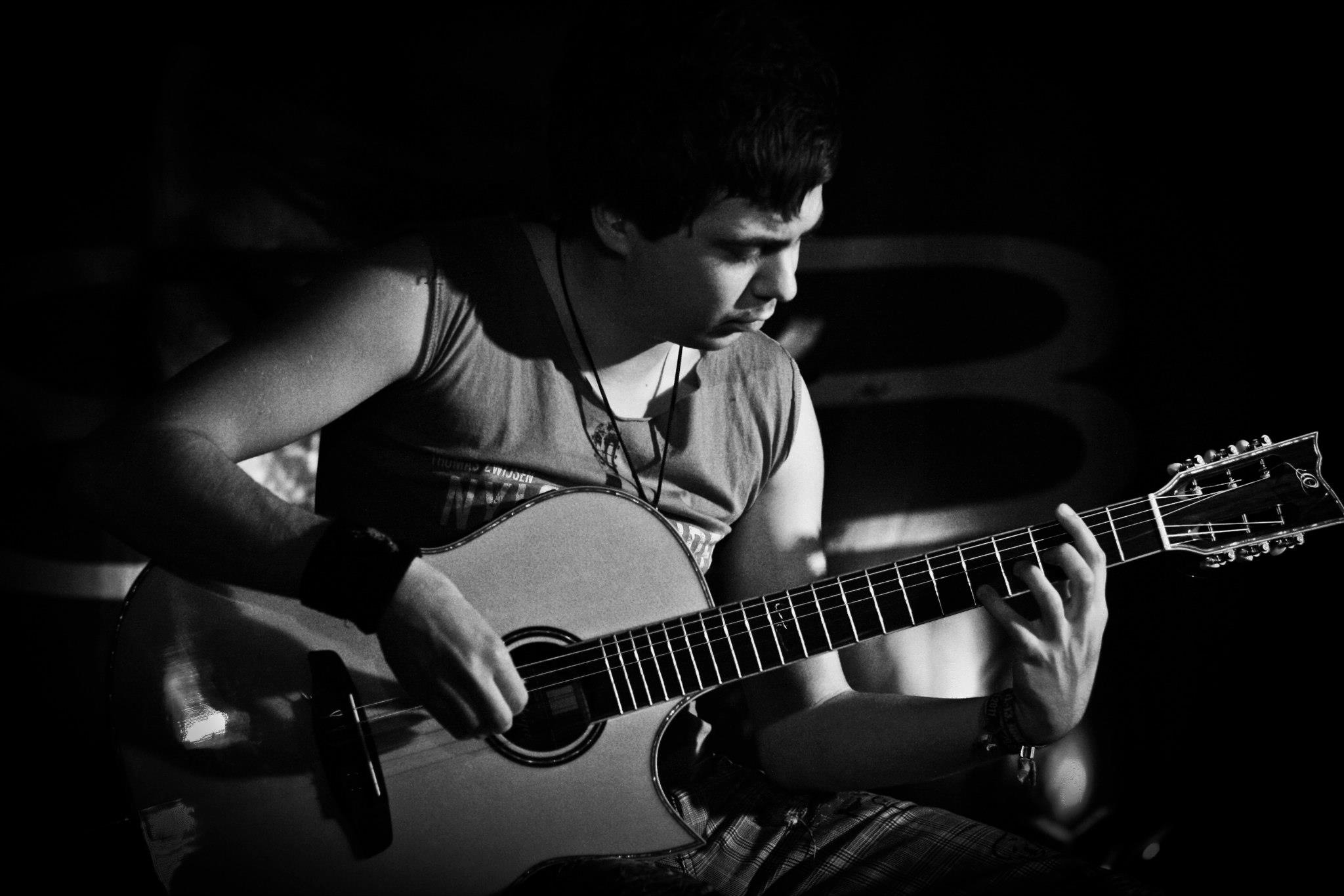 The Internet is full of very good (and sometimes very bad) cross genre cover versions. Do you fancy some klezmer versions of hip hop classics? Or perhaps some easy listening grunge? It’s all there, and it can be fun – until the novelty wears off.

So when I tell you that THOMAS ZWIJSEN’s claim to fame is several albums of classical-flamenco acoustic guitar versions of Iron Maiden songs, you could be forgiven for any ambivalence. But this is no novelty act. ZWIJSEN is an outstanding musician, a guitarist with a unique approach, completely without peer.

Ex-Maiden vocalist Blaze Bayley thought so, and ZWIJSEN has served as both guitarist and co-writer on Bayley’s 2012 album, The King Of Metal, and the following year’s Russian Holiday EP, as well as touring with him. On his own, he released his first album of original compositions in flamenco-classical-fusion style, Divide And Unite, in 2015. In addition to his two Iron Maiden collections (Nylon Maiden and Nylon Maiden II) he’s also released interpretations of tracks by such legends as Deep Purple, UFO, and Queen, to name a few.

BEN WOODS is cut from much the same cloth; flamenco master with a metal influence, and he and ZWIJSEN often tour and record together. WOODS however, has an interesting surf rock influence as well, making him quite distinctive and the perfect support act.

This show will combine the fun of hearing creative renditions of familiar songs with the kind of stellar musicianship guaranteed to please the most discerning of guitar junkies.

Check out this clip of ZWIJSEN playing the Maiden classic, “The Trooper,” in which he plays both harmony guitar parts AND the bass line simultaneously!

At Kwadrat, a chance to see a one of the biggest Polish artists of the early part of this century. They have a kind of light alternative vibe, derived from the poppier end of the 1980s New Wave era and bands like The Police. Perhaps not earth-shattering, but here’s a chance to experience a certain type of very good Polish alternative-pop-rock.

From their name, you might presume that LEGEND OF KAZIMIERZ are a typically touristy Krakow klezmer band capitalizing on Jewish tourism. But these are three master musicians – Mateusz Frankiewicz (double bass), Paweł Iwan (accordion), and violinist Tomasz Pawlak – who use Jewish folk music as a springboard for their own compositions which feature Balkan, Roma, and other aspects of influences from the Mediterranean region, and they’ve worked with such luminaries as Hans Zimmer and Nigel Kennedy. Just as Krakow is a city rooted in tradition but with influences from all over, so is the music of LEGEND OF KAZIMIERZ. Which, I suppose, makes them truly local.

Anja Orthodox has kept Polish gothic legends CLOSTERKELLER going strong through over a quarter century of political, cultural, and musical shifts, as well as many personnel changes to her band (she is the sole original member) – all without it affecting the dark beauty of her vision. This autumnal tour, called The Abracadabra Gothic Tour, has become something of an annual Polish tradition, and the addition of two new members (who are actually younger than the band itself) have reportedly breathed new life into proceedings. The set promises to feature new material alongside classics from such ubiquitous goth albums as Purple and Scarlet.

This video of a concert from Klub Studio here in Krakow a few years ago shows why they are the standard bearers for Polish goth, as well as what a magnetic performer Anja is.

Since winning Poland’s Pop Idol TV show in 2004, BRODKA (as she is often known) has seen all four of her albums – including the new Clashes – as well as their attendant singles, rise to the top of the charts. But she is much more than a predictable safe pop singer. Like Kate Bush, after a couple of albums she seized control of her musical destiny, and made a distinct left turn, and in doing so showcased an individuality previously subdued. Also like Kate Bush, her willingness to experiment and expand her musical palette has only enhanced her reputation and increased her fame. The Clashes album represents a new creative benchmark, and this show should be not only musically and aesthetically great, but a celebration of an artist’s success at bringing some weirdness to pop music, or making the mainstream just a little less ‘normal.’

No one really knows who BOKKA are – the online community boasts many educated guesses but the whole project is ‘shrouded in mystery’, as they like to say. Which usually is the kind of wacky contrived marketing tool BS that I wouldn’t bother with, but when the music sounds a bit like a synth-dream-pop Lana Del Ray, who really cares? Whether the band consists of some well known Polish pop stars exercising their inner tortured artists, or is perhaps a Daft Punk-wannabe stunt, or maybe even a sincere bid for anonymity – it just doesn’t matter because the songs are great. Live, they usually consist of five musicians and a female singer – in costumes with mirrors on their faces, of course.

This is their Don’t Kiss Don’t Tell Final Tour, which may mean that it’s the last tour promoting the same-named second album, or perhaps they’re breaking up. Unsurprisingly, they’re not saying. But whoever they are, they plan on disappearing either temporarily or permanently – they sure do love mystery, don’t they?

You could easily be forgiven for mistaking DELAIN for fellow Scandinavian symphonic power metallers Nightwish or Within Temptation. Their music features the same kind of distorted chugging guitar riffs ornamented with orchestral keyboards, with soaring female operatic vocals on top, and their albums tend to have huge sprawling conceptual storylines, but DELAIN have a more melodic pop sensibility, as evidenced by the new Moonbathers opus.

Balancing that nicely will be veteran Swedish progressive metal act EVERGREY, currently touring their 10th album, The Storm Within, and Canada’s KOBRA AND THE LOTUS, the youngsters on the bill, featuring the distinctive voice and charismatic stage presence of Kobra Paige fronting a harder, thrash-oriented take on the power metal genre.

While it’s impossible to list every event, the UNSOUND FESTIVAL (Sunday 16th – Sunday 23rd) begins this week at venues all over town, with a wide variety of unique events from concerts to dancing to psychological profiling at prices from free to 80 zł, with most on the cheaper end of the scale. Check out the link for the many details, but a few of the notable artists from all over the globe passing through include XYLOURIS WHITE (featuring Dirty Three drummer extraordinaire Jim White with lute master George Xylouris) on a bill with Krakow’s own STARA RZEKA collaborating with Tajik band SAMO, combining traditional music of the Pamir mountains with guitar and electronics (Tuesday 18th – Manggha – 19:00 – 35 zł.)

The next day, also at Manngha, Baltimore’s HORSE LORDS, who have been getting serious buzz with their dense mixture of jazz improv, African rhythms, and experimental art rock, will be appearing with electronic artists RASHAD BECKER and KAITLYN AURELIA SMITH, who have very differing approaches to the genre (19:00 – 35 zł.)

MATMOS, perhaps best known for their work with Björk, are a creative force to be reckoned with, and will be taking the concept of musique concrète to a new level with their two hour performance using sound and visuals from the U.S. soap opera Perfect Lives, featuring members of Sinfonietta Cracovia. With Polish subtitles even! (Thursday 20th – Kijow Centrum, Krasińskiego 34 – 19:00 – 50 zł.)

These are just a few of the dozens of worthwhile experimental artists that will be appearing, in addition to the many DJ sets, panel discussions, and club nights.

Finally, if you feel like traveling this week, THE CURE will be at the Atlas Arena in Łódź on Thursday 20th October, and there are still a few nosebleed seats left for 149 zł. They’ve been playing marathon 35 song sets filled with greatest hits and deep cuts, and sound the best they have since their 1980s/90s heyday. I say this a lot, but I really believe in taking advantage of the chances we get to see legends of music like this. Because you never know which time will be the last.