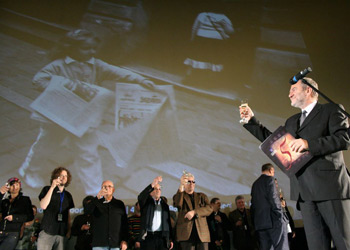 An awards ceremony and film screening that lasted well into the night concluded the 49th annual Krakow Film Festival yesterday. First, the winners received their awards in a grand ceremony that featured a musical performance by the whimsical Małe Instrumenty band, after which three of the winning films were screened.

The Golden Horn for feature-length documentary film was swept up by Israeli Nati Baratz, for the film Unmistaken Child, about a Buddhist lama’s search for reincarnation. Second place, or the Silver Horn, was awarded to Finish directors Juha Taskinen and Petteri Saario for their film Sergei The Healer/Siergei Verenseusauttaja about a forgotten village in Russia where time appears to stand still. Brit Kim Longinotto received the Honourable Mention for the film Rough Aunties.

Meanwhile, in the international competition the film Pizza in Auschwitz/Pizza be Auschwitz, by Israeli director Moshe Zimerman, swept up the top Golden Dragon prize. The film followed a Holocaust survivor as travelled with his children to Auschwitz, his former “childhood home.”

In the national competition, Bartek Konopka’s very amusing Rabbit a la Berlin/Królik po berlińsku won the Golden Hobby-Horse. The film told the story of the rise and fall of the Berlin Wall from the perspective of the rabbits trapped between the walls, following their entrapment, adjustment, and eventual freedom and all of the trials of being an ordinary rabbit caught between two conflicting ideologies.

With plenty of smaller prizes and honourable mentions awarded, it’s safe to say that the festival’s juries selected the cream of the crop from the many excellent entries in this year’s competition.