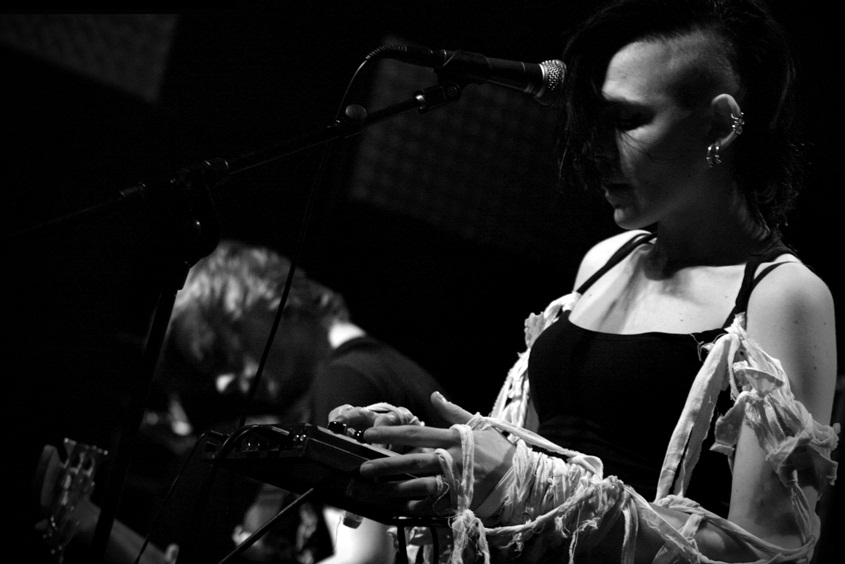 Depending on your age and musical interests, the genre heavy metal may conjure images of Black Sabbath, Iron Maiden, Metallica, or maybe Motörhead. But HM has spawned more musical subgenre than probably any other form of music – including even jazz (and just like jazz, if you’ve ever been privy to a bunch of aficionados arguing about what does and doesn’t constitute “real” or “true” metal, you’ll never again make the mistake of thinking it’s all the same!)

Warsaw’s OBSCURE SPHINX are one of Poland’s most exciting new metal artists, and their sound is a unique combination of various subgenre such as doom, sludge, industrial metal, and that wonderful catch-all ‘post-rock’, a meaningless term which can cover everything from Radiohead to Jack White to Linkin Park to Rammstein.

To put it simply – their music is Heavy. No, I mean REALLY HEAVY. It’s big and dramatic, and yet occasionally features moments of gentle beauty which only serve to underline how SERIOUSLY F***ING HEAVY the rest of it is. But what makes the band completely unique is the remarkable voice and maniacal stage presence of the singer (and screamer) known as Wielebna. She can run the gamut from gentle melismas to shrieking banshee (and it’s mostly the latter, by far) at the drop of a beat, and she sounds like no one else. The word ‘arresting’ doesn’t begin to cover it.
The band came to prominence after being discovered by Nergal of the legendary Polish metal giants Behemoth, who took them on tour as support act, where they won over audiences with their dynamic live show. They’ve just released their third album, Epitaphs, and the early reaction from the metal world has been ecstatic, so this should be quite an event.

Opening will be SUNNATA, also from Warsaw, and they too specialize in an exceptionally heavy brand of ‘ritualized’ depressive doom metal, post-metal, etc., etc.

This is a chance to witness the future of this often misunderstood genre unfold. As someone who first saw Black Sabbath back in his preteen years on the Master Of Reality Tour, I admit that I have a preference for the more melodic end of what these artists have to offer. But if you’re the type of person for whom a great dramatic distorted riff coupled with a bottom heavy beat makes the hair stand on end, there’s no doubt that this show will induce that particular unique ecstasy peculiar to heavy metal.

Let us turn our attention, if you will, to the philosophical conundrum, “when is a boy band not a boy band?” In the landmark decision in the case of One Direction v. 5 Seconds Of Summer, it is asserted that the latter do NOT fit the legal definition because they are, in point of fact, able to create and perform music without the aid of a third party (musicians, writers, etc.), nor did any manager or producer construct them from an agency catalog of head shots. They came together organically, with the goal of forming a band and playing their songs.

By this reckoning, UK superstars THE VAMPS are more of a “real” band than The Sex Pistols ever were, and it is inaccurate to call them ‘England’s Newest Boy Band Sensation’. And they understandably want the world to know that.

But hey, there’s an art, or at least a craft, to fun teen pop music, and the half dozen top ten UK singles they’ve had in the past three years prove that these kids know what they’re doing.

They’re not as good as 5 Seconds Of Summer though. Those guys ROCK.

Like so many cultural musical styles that have taken root here, the French cabaret style of pop known as Chanson might seem incongruous with Poland. But when you consider its similarity in structure and subject matter to the Polish poetry songs of the communist era, it’s no surprise that the songs of Édith Piaf resonate. As an American, I find it fascinating that DOROTA HELBIN BĘBENEK will be performing the French songs of the great diva Piaf, translated into Polish – as someone who understands little French or Polish, I have always been moved by the emotion inherent in both the sung poetry of Poland and Francaise Chanson. This is music that touches the soul, in any language. Miss Bębenek will be accompanied by accordionist MATEUSZ DUDEK. A bigger, more elaborate (and much more expensive) Piaf tribute show is coming to the ICE center in November, but this simple presentation in a cabaret club may actually be more redolent of the intended spirit the music evokes.

Morcheeba are one of the architects of the trip hop movement of the 1990s, but the original lineup of Ross and Paul Godfrey with singer Skye Edwards has been anything but stable, and the band’s musical vision has been equally inconsistent. Edwards left (or was downsized) around the turn of the century, and a succession of replacements and guests saw the brothers try their hands at pop, psychedelia, and R&B, to varying degrees of success, until Edwards return in 2010. Since then, they’ve recaptured some of their former glory, but this ‘side project’ – with 2/3 of Morcheeba present – aims to capture the essence of what made the band special to begin with, and reaction to their newly released eponymous EP has been very positive. This is essentially a chance to see (most of) a legendary band in a very intimate setting.

Like fellow Swedes Opeth, who they’ve often toured and collaborated with, the KATATONIA of today bears virtually no resemblance to the Cookie Monster vocals and intense death metal of their debut album a quarter century ago. Their excellent new album The Fall Of Hearts is closer in spirit to the solo work of Steven Wilson or the last couple of Riverside albums than anything else, which is to say, this is modern melodic song-oriented progressive rock with personal lyrics full of emotional depth.

Copenhagen’s VOLA have been hailed as some sort of new progressive messiahs, with a fusion of influences from the math metal of Meshuggah to Massive Attack’s trip hop. The consensus is that they aren’t quite there yet, but there could well be greatness in their future.

These are three very different bands, yet all share the common goal of great musicians since the beginning of time – the quest to take the music somewhere new, somewhere it has not yet traveled.