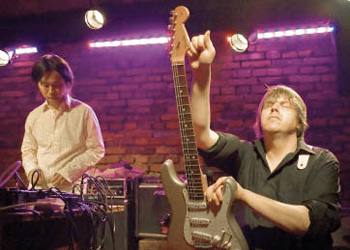 Much has been achieved by the Audiotong Foundation since its launch in 2005, including a string of innovative releases on its label, and yet it has largely remained off Krakow’s cultural radar. As if to remind us of its ample contributions, the organization celebrated its fourth birthday at Alchemia last month.

The night got off to an energetic start with Krakow musicians DMP Trio, their two limb-twitching saxophonists playing disjointed melodies alongside the third member’s laptop and electronics. Next up was the talented duo of Ray Dickaty on saxophone and Rafał Mazur on acoustic bass guitar. Each song performed by the duo had its own distinct theme, though they were clearly improvised in most parts, the ideas bouncing back and forth, weaving together and falling apart along the way. Constantly looking and listening to each other, the duo’s strong musical connection was fascinating in and of itself.

The most anticipated act, at least for me, were New York residents and long-time collaborators Aki Onda and Alan Licht, who were joined by French guitarist Noël Akchoté. These were artists I had only read about at school, and I have to admit I was giddy to see them in the flesh, like a true sound art groupie. Aki Onda’s field recordings were laid before him on a table. His medium of choice was the fragile, in many ways crude format of magnetic tape – in cassette tape form nonetheless. But as his Walkmans were fed through multiple effects, reverbs, and delays, he was seemingly effortlessly shaping elegant textures of incredible depth. Together with Licht and Akchoté’s manipulated guitar soundscapes, the trio were easily the highlight performance of the evening.

Duet Aabzu were the most musically accessible group of the night, though their laptop-driven electronica wasn’t without its fair share of noise. And as if to completely question my understanding of noise, William Bennett, a founder of power electronics group Whitehouse, stepped onto the stage under his Cut Hands guise. A simple laptop was all it took to completely blast the club with deafeningly loud noise, something I appreciate in theory, but in practice I prefer to keep my hearing for future use.

As if this evening of eye-opening entertainment was not enough, Audiotong’s anniversary continued over to the next day at Eszeweria. Through this two-day celebration, Audiotong, without a doubt, cemented its status as Krakow’s most reliable source for intriguing musical adventures.