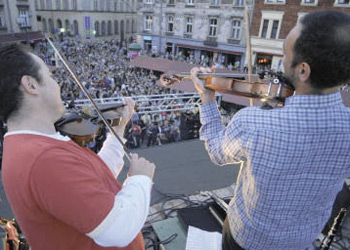 Now in its 19th year, the annual Jewish Culture Festival brings a week of music, workshops and special exhibitions to Kazimierz, the district that for centuries was the centre of Jewish life in Krakow. The zenith of every year is the Shalom on Szeroka party, which this year features Balkan Beat Box (USA/Israel), Cukunft (Poland) and All Stars Festival Orchestra. But there are plenty of other events every single day between the 27th of June and the 6th of July (and a little afterwards). To find out more, the Krakow Post spoke to Jonathan Ornstein, the director of the Jewish Community Centre (JCC) in Kazimierz.

KP: What is the JCC’s involvement with the Jewish Culture Festival?

JO: The JCC will be a central venue during this year’s festival. We will be hosting a wide range of workshops including Yiddish language, Hebrew calligraphy, Paper Cutting as well as lectures on cantorial music, Yiddish Theatre, and the Holocaust and creative imagery. As we did last year, we will turn our basement into the Green Room for artists performing at the Tempel Synagogue with which we share a courtyard.

Aside from hosting festival events we are excited this year to offer our own programme of accompanying events including a Shabbat dinner with Chief Rabbiof Poland Michael Schudrich, Chief Rabbi of Krakow Boaz Pash, festival director Janusz Makuch and others.

We will present, along with the Jewish Students Associations ZOOM and Czulent, a three-day series of lectures by young Polish Jews about modern Jewish life in Poland. We want to take the opportunity while the focus of the Jewish world is on Krakow to show that there is in fact Jewish life here year-round and that it is varied, vibrant and on the rise. By having local young Jews give lectures we hope to dispel the widespread belief among Jews worldwide that Poland is a place where there is a Jewish past and not a Jewish future.

KP: What are some of the events you’re most excited about in this year’s festival?

JO: Szewach Weiss coming to speak is always a treat. Rabbi Gluck’s tour of the Old Jewish Cemetery is always fascinating. Daniel Kahn and the Painted Bird will no doubt be a great concert, and having Balkan Beatbox performing at the “Szalom on Szeroka” concert with 10,000 people will be for me a definite highlight.

KP: Where will most of this year’s events take place?

JO: There’s a real feeling of turning back the clock during the festival with Kazimierz becoming this incredible hub of Jewish life. The festival cooperates with all kinds of institutions who lend their space and make a festival of this scope possible. Seven synagogues, the JCC, Galicia Museum, SCKM, Eden Hotel, Alchemia, Drukarnia, Heder café and quite a few others that I’m forgetting to mention will host the festival as well as all of Szeroka Street the final night.

KP: How will this year’s festival differ from previous years?

JO: This year there’s an emphasis on Sephardi music and culture, which is a departure from past festivals, which have seen a heavy emphasis on European, Ashkenazi culture. Jewish culture represents so many different elements, I think it’s great that Poles will get a chance this year to be exposed to aspects of it which they may not have been exposed to in the past or would even normally associate with Judaism.

KP: Do you think the festival has played a part in reviving Jewish culture in Krakow?

JO: Without question, the festival has played a big part in the so-called Jewish revival of Krakow. What was in 1987 a subversive idea – that Jewish culture deserves to be showcased in Krakow – is now accepted without question. I think Janusz Makuch and the festival have impacted life here in two ways: Poles have been exposed to a huge variety of Jewish life and culture, and foreigners, especially Jews, visiting Krakow for the festival have come to see it as a place with a Jewish present and hopefully a Jewish future.

I see the Jewish revival in Krakow is having two stages, the first being the local population being open to minorities living here – Jews in particular – and the second being local Jews staying in Krakow and being comfortable expressing their identities openly as well as attracting Jews from other places to settle. The festival has paved the way for the second stage by helping to create an environment in which Jewish life can develop and flourish.

I strongly believe that the festival has had an impact that Janusz Makuch wouldn’t have dared imagine 22 years ago. It has become the catalyst for not only a “Jewish Revival” with Poles appreciating and celebrating Jewish culture, but a “Jewish Jewish Revival” with Jews once again making Kazimierz and Krakow their home.

The festival begins tomorrow. We’ve listed some of the festival’s highlights below, but you can find the full schedule here.