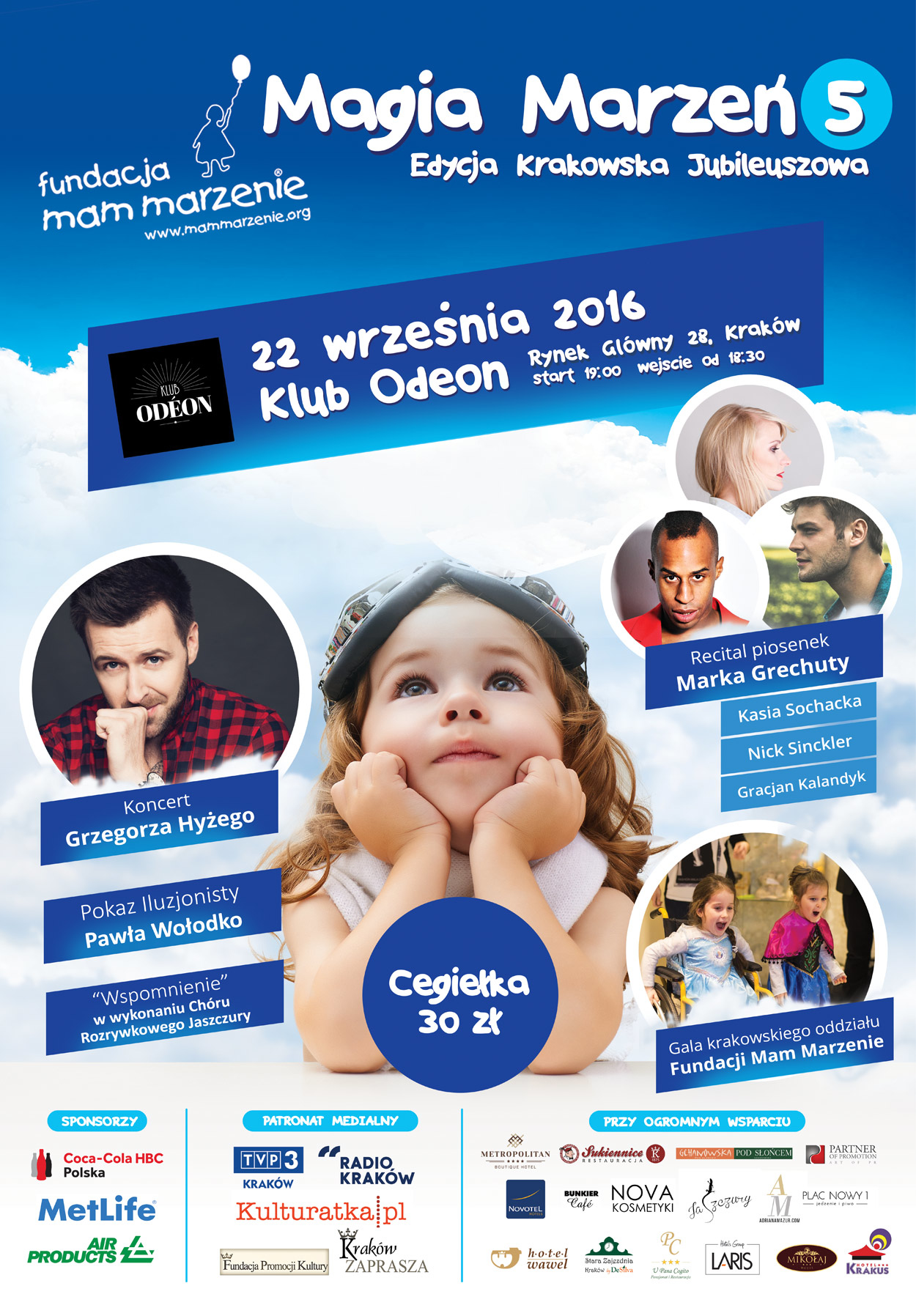 Since 2010, starting in Warsaw, the Franciscan FMM mission has presented a series of benefit concerts to help sick children — a kind of Polish Make A Wish foundation, if you will.

The whole thing kicks off with a choir singing the theme song of these shows, “Memories”, which was actually written by one of the children the foundation helped. There will be an auction and various other opportunities to give, as well as a magician on hand.

And of course, there’s music. X Factor runner-up GRZEGORZ HYŻY had a big debut album (with the band TABB) with 2014’s Z całych sił, including the #1 single, “Na chwilę.” He recently hit the Top 40 with “Pod wiatr”, from his forthcoming solo album, and he’ll be playing an acoustic set.

Both KASIA SOCHAKA and GRACJAN KALANDYK are also veterans of the TV singing contests, while NICK SINCKLER is a singer/songwriter from Warsaw, and the three of them will be joining forces for this great cause to perform the songs of legendary singer-songwriter-artist-troubadour Marek Grechuta. Krakow’s annual Grechuta Festival, celebrating the man, his life, and his music, is a little over a month away, so consider this a preview to get into the spirit of that great artist.

When someone uses the phrase ‘World Music’ to describe a band, it’s usually lazy shorthand for ‘something not Western that we can’t be arsed to learn about’, but in the case of ANNUTURA, it’s a pretty apt description. The Balkans, Romania, Ukraine, and of course Poland are some of the countries their sound pays homage to, but it’s the Arabic, Jewish, and Shamanistic influences that make their music truly unique. This is traditional music for the global village.

They describe themselves as ‘Pigeon Rock’, and while that may seem abstract to the point of uselessness, it’s actually a pretty good description, if only because BLEEDING MOSES are as bizarre as that suggests. They don’t really sound like anyone else, but if you enjoy the general weirdness of MGMT, The Flaming Lips, or Tame Impala, there’s a good chance you’ll enjoy them.

Michała Walczak and Macieja Ptaszyńskiego are former members of local rockers Cry of Pain, but now, as the duo VOODOO SEEDS, they play a kind of original folk blues with excellent vocals and clever (sometime funny) lyrics. Check out this song for an entertaining example.

The KSB is a loose confederation of locals and street musicians playing horn-laden, ska-infected covers of everything from Creedence Clearwater Revival to Donna Summer and then some. Their show on the roof of Plac Nowy this past summer was an absolute blast, and here they’re playing as part of the Święto Ulicy Krupniczej festival. The fest itself starts at noon, with all manner of free entertainment, including art and history tours, as well as the usual ubiquitous array of Krak0w vendors. As autumn trundles merrily forward towards year’s end, these kind of outdoor gigs become scarce, so it’s good to take advantage of as many as possible. If this band doesn’t make you smile, well… check your pulse – it may be too late.

Finally, if you’re a progressive rock fan, this is an important week, although you have to leave town to take advantage of it. The legendary KING CRIMSON will be doing four shows in Poland, in Zabrze (at the House of Music and Dance) on Saturday and Sunday (17th/18th), and again in Wrocław the following Tuesday and Wednesday (20th/21st) at Nardowe Forum Muzyki. The current lineup, led by Robert Fripp as always, features an unusual three drummer frontline (including Porcupine Tree alum Gavin Harrison and Crimson veteran Pat Mastelotto) as well as a special connection to Poland in multi-instrumentalist Jakko Jakszyk, a Brit of Polish origin (well, by adoption anyway.) With a setlist that includes material that hadn’t been played live since the 1960s, this is a dream show for any progressive rock enthusiast, with feet planted in tradition and eyes gazing into the future. See you there!