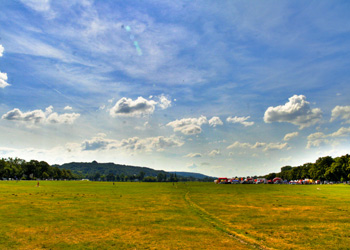 This month, Franz Ferdinand will rock there. In the past, Celine Dion has crooned that her heart will go on there, while Pope John Paul II inspired a million hearts to keep the faith there. Daily, hundreds walk their dogs there, rollerskate and bike around it, or stretch out in the sun on its grass. It is the largest open space in a city centre in Europe. It is of course Krakow’s Błonia Common, and it has the city’s architectural community up in arms to defend its unspoiled existence.

The authorities of a small local sports club, KS Zwierzyniecki, are planning to build a hotel on the Błonia. The club controls a small section of the common from the Focha Avenue side, where they have a small football pitch, a tennis court, a grossly neglected clubhouse and a wooden shack hosting a printshop. Its football team is in the 7th league, ranking fourth from the bottom in their division.

The struggling club hopes that building a hotel will reverse its financial fortunes. The club is being financially backed by Amako, an advertising firm, which hopes to manage the facility in the future. The firm, which handles the club’s advertising, has secured the thousands of złoty for the architectural renderings and models of the hotel. The 2000 sq. m planned hotel will have 26 rooms, a restaurant and cafe, as well as sporting facilities including a gym and spa.

After Gazeta Wyborcza published the sports club’s hotel plans, the Krakow branch of the Polish Association of Architects wrote a letter to the city’s head architect, prof. Andrzej Wyżykowski, stating: “Let’s protect the Błonia! This open meadow can and does serve many recreational, and not developmental, purposes.”

The letter emphasises that the entire stretch of the Błonia should be viewed as a whole, which should not be disrupted by any permanent buildings. It adds, “City authorities should not only block attempts to build on the Błonia, but also undertake to transfer the sports clubs to newer, more attractive, locations.”

The 48 hectare Błonia has been protected since 2000 as a national heritage site. While the district’s council has approved plans for the hotel, its critics fear that it will open the floodgates to further development on the Błonia. There are also fears that the infrastructure of the area could not handle traffic to and from the hotel, as Focha Avenue, a two-lane road, is already crowded during rush hours.

The Błonia Common has been in the possession of the city since 1366, when the previous owners, a group of Norbertine nuns, traded the field for a house on Floriańska Street. However, it was neglected until the 19th century, when it was transformed from a swamp to a meadow and its potential for hosting large gatherings began to be realised. But even until the turn of the 20th century, it was used as a field for grazing cattle. In 1910, it was the site of the first airplane landing in Krakow, and soon after it was overtaken by the city’s first sporting clubs.