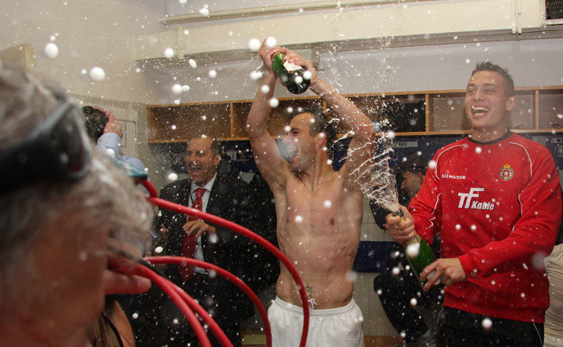 And in the end, it was Wisła Krakow taking the Polish football title after one of the most exciting seasons the country probably has ever seen. A 2-0 victory over Sląsk Wrocław was enough for the “White Stars” to retain the title despite a very convincing win by rivals Legia Warsaw who defeated Ruch Chorzów by 4-1. Wisłą had to thank Ryszard Sobolewski and the soon departing Marek Zienczuk for the goals, the victory and subsequently, the title.

Still, this year’s title raises question marks. Last year’s title could be considered as a landslide victory and during the summer Wisła showed character in Europe against top teams such as Champions League winner FC Barcelona and Tottenham Hotspur. In fact, Wisła is the only team (apart from UEFA Cup winner Shakhtar, but that was a symbolic game where there was nothing to gain or lose by either side) that can claim that it has beaten the European Champion this season in the European games; a 1-0 home win wasn’t enough however, to make up for the 4-0 away loss.

This brilliant performance in mid-2008 was followed by a Polish league start that can be described as average at best; Wisła was in fourth after the first half of the season. Lech and Legia often showed better football, the first mentioned team even in the UEFA Cup advancing to the knockout stages in early 2009. But Wisła remained consistent, where the other rivals constantly dropped points against one another. Lech lost points due to the tight schedule, including high level European matches, whereas Legia had a dramatic month of April without a single win, apart from the home confrontation against Wisła’s derby rivals, Cracovia. Wisła clang on to the top teams and marched on through. The decisive win came on 9 May when Wisłą beat Legia by 1-0 in Krakow. However, the gap to Legia remained only three points by the end of the season. About one year ago, Wisła dominated the Ekstraklasa with a 14-point gap. This season’s title wasn’t won by Poland’s best team, but rather Poland’s most consistent one.

So what brought the change? Did Wisłą get weaker or the competition stronger? Well, both actually. Both Warsaw teams, Legia and Polonia, and the Franciszek Smuda lead side of Lech Poznań really did give the defending champion a better run for their money than last year. But on the other side, Wisłą is losing more players out of the successful period of 2003 – 2005. After this season, club icons Marcin Baszczynski and Marek Zienczuk will also leave the club. Legia has had relatively few changes in their squad lately, whereas Lech simply produces the best youngsters and if they do not train them, they buy them with Poland’s best eyes (read: scouts) for young talents: these are items that guarantee continuity and eventually success. The big question is, how is Wisła going to cope with yet another departure from two defining players in their squad. Not just in the Polish league, but also in the Champions League second qualifying round.

Wisła is celebrating and contemplating the future. On the other side of the Błonia field, other football fans were in mourning. Cracovia relegated out of the Polish Ekstraklasa after not getting any further than a 2-2 draw in and against Poznań. Brazilian Lech player Renfigo put the “Railwaymen” (nickname for Lech Poznań’s players) ahead twice and the equalizer of Tomasz Moskała in the 82nd minute did spark some hope in Cracovian hearts but the point from the draw did not prove to be enough to keep Krakow’s second team in the Ekstraklasa.

Together with Górnik Zabrze, Cracovia will have to play matches in the First League next season. They will be replaced by Widzew Łódż and Zagłebie Lubin. And so you can see, that winning and losing come very close to each other. And this season Krakow was the most apparent example with one team ending on the top spot and the other closing the league standings. Krakow laughs, Krakow cries.