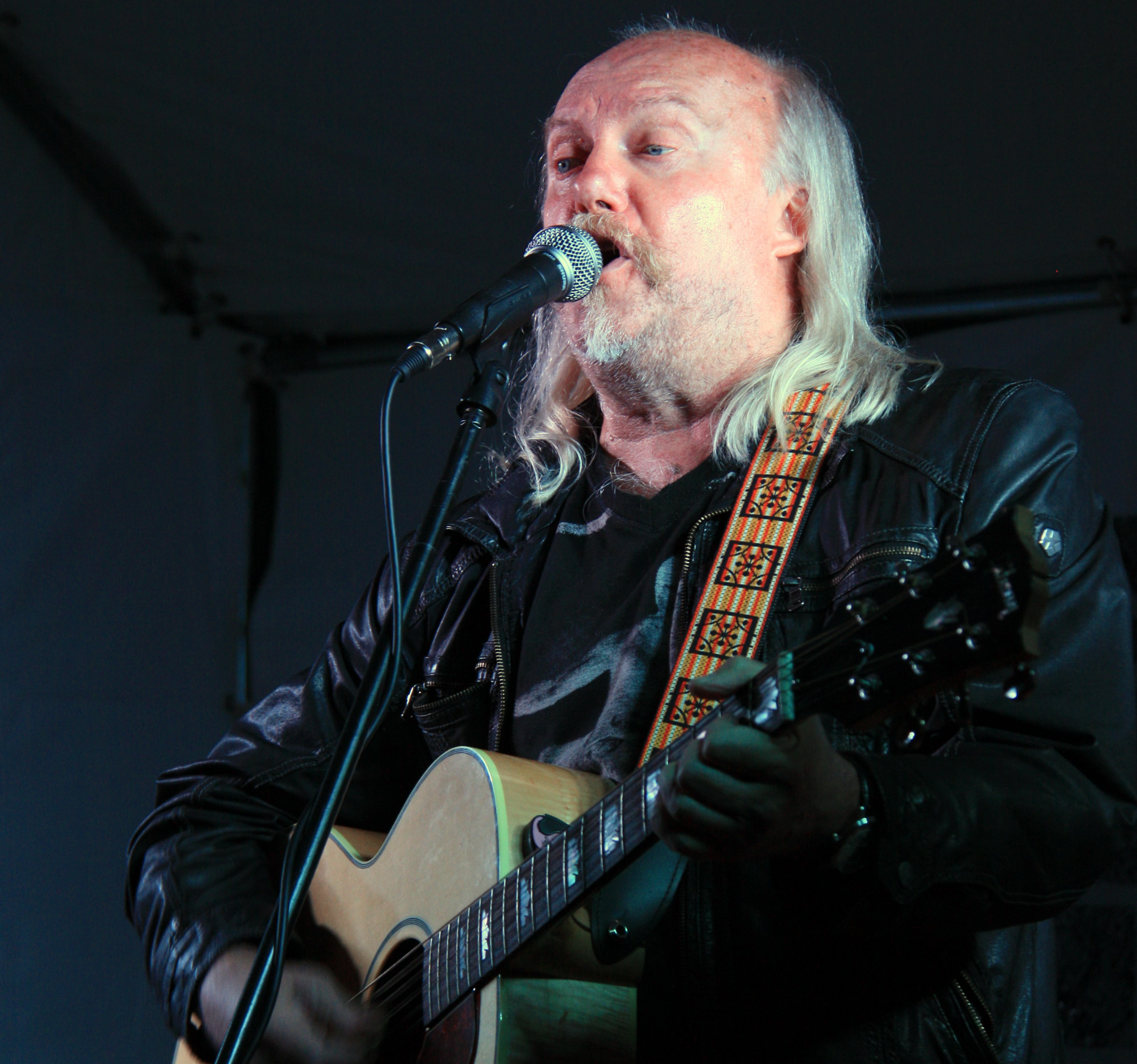 The Rynek in Podgórze is a modest yet pretty space with a great atmosphere that is nearly dwarfed by the visage of enormous stately St. Joseph Church, one of the biggest in town. It’s a great place for to see a Polish legend like ANDRZEJ SIKOROWSKI. If you’re not familiar, his career dates back nearly five decades, when he first rose to prominence as the 1970 winner of the Krakow Student Song Festival. He went on to win many, many more such competitions, but more importantly formed the influential Pod Buda musical collective in 1977. He’s also had great success as a solo artist and as writer of hits for other artists, notably Maryla Rodowicz. Over 20 of his albums have attained Gold or Platinum sales status, and he had a Top 20 collaboration with Grzegorz Turnau in 2007 called Pasjans na dwóch (Solitaire For Two), a live album featuring the hit song, “Nie przenoście nam stolicy do Krakowa” (“Don’t Move the Capital to Krakow”). In the golden era of legendary singer-songwriters like Marek Grechuta and brilliant instrumentalists like Jan Kanty Pawluśkiewicz, he stood out and became known as Krakow’s (as well as Poland’s) first ‘Bard with a Guitar’, an apt description for his unique storytelling set against a simple yet melodic foundation.

Surely that is enough of a CV, but SIKOROWSKI is a true Renaissance Man, with a wealth of talents beyond that of singer-songwriter. He has a journalistic history that includes, among other things, a weekly column in the Dziennik Polski newspaper and is the host of the show Musical Rumours, which started on Radio One and eventually moved to television. At 66, he shows no sign of slowing down, with a number of shows (including some with Grzegorz Turnau) taking place all over Poland in the next few months. Regular readers know that I’m guilty of saying this often, but here is a chance to experience a true legend of Polish music, and this time it’s free.

While ROBERT KASPRZYKI is a couple of decades younger than Sikorowski, he is cut from similar cloth in both musical style and history. His career also began with the student song contests, taking first place in Olsztyn’s Let’s Sing contest in the 1990s with his “Brudny autobus do stacji Golgota” (“Dirty Bus to Golgotha Station”). He’s authored several books of poetry, and is a renowned academic as well, winning awards for his Ovid and Horace translations. In 2008, his song, “Naprawdę kocham deszcz” (“I Really Love the Rain”) reached #6 on the Polish charts, and 2014’s “Trzymaj się wiatru kochana” (“Hold on to the Wind my Love”) was also a big radio hit. Musically, his staccato fingerpicking style is reminiscent of British Isles folk, but with an unmistakably Polish ethos.

Also appearing are an array of singing actors, cabaret, jazz, and orchestral performances – all capped off with a fireworks display. As autumn comes fast upon us, these sort of multi-artist outdoor freebies necessarily become more scarce, making this one even more exciting.

Got ink? Well, here’s your chance. Since the rise of the various 1990s Gen X alternative subcultures, tattoos, piercings, rainbow-colored hair, and goth clothes have become so common that they no longer so much as raise an eyebrow. And of course, where there’s demand, supply will follow. Still, an exceptional tat artist is something beautiful to behold, and here’s a chance to check out over 20 body modification artists (including piercers) from all over Poland.

Besides that, though, there’s the music. THE RUMJACKS are to Australia what Dropkick Murphy’s are to the U.S. – a completely insane Celtic folk punk outfit that take the music of Ireland (by way of The Pogues especially) as a starting point and, um, punch it in the face.

Outside of that, the entire roster for both days is homegrown. Although their debut album wasn’t released until 2000, BULBULATORS have been plying their trade as leading exponents of Silesian punk since the year communism fell (that would be ’89, in case you’ve forgotten.) They’ll be joined by fellow punk Poles TRIPIS, MINORITY, TYLKO JEDNA MYSŁ,  and the wonderfully monikered LITTLE BOY SILESIA HARD CORE PUNK, as well as Cracovians MASTEMEY and SKACOWANI (metal and ska respectively.)

Krakow’s legendary gothic metal band CEMETERY OF SCREAM will wrap things up on Sunday night, and if you miss Type O Negative, you need to check these guys out. If your body is a blank canvas needing some superfluous artwork and holes to stick bits of metal through, I can think of no better soundtrack.

A native of Grand Rapids, Michigan, HEATHER BARTMAN has been in town for nearly a month. She left teaching to devote all of her energies to music, and she’s living the ‘no fixed address’ romantic dream of every young musician, traveling the world playing her songs.

Although she’s only been playing guitar a short time, songwriting and poetry have been her passion since childhood. For this show, a number of cover versions will be interspersed with her originals. She sounds more Tennessee than Great Lakes, but, hey, Jewel’s from Alaska, right?

Krakow may just be a brief stopover in this young woman’s itinerary, so this may be the only chance to check her out, at least for awhile.

This is the third time in a month that I’ve mentioned the legendary experimental progressive rock/jazz fusion group SBB here, and the three completely different contexts they have performed in during just these few weeks is a glimpse into the astounding diversity of their musical skills. First, they revived their influential 1975 album Nowy Horizont in its entirety for the OFF Festival in Katowice, then performed a collaborative set with electronic pop duo Rebeka at the Męskie Granie concert, and now? How about a night of experimental jazz with the equally legendary trumpeter TOMASZ STANKO?

Worldwide, STANKO is one of the most famous musicians to ever hail from Poland. He has recorded for the prestigious ECM label, and is a leading exponent of improvisational and free jazz. He famously had to rediscover his embouchure (the way a horn player uses mouth position, etc. – a distinctive factor in a musician’s individuality) after losing all of his teeth in the 1990s, a nearly impossible feat for a horn player.

This is truly a meeting of two giants, who between them have released somewhere around TWO HUNDRED albums! There won’t be much in terms of traditional verse-chorus songs or easy listening Kenny G type jazz, but there will be some serious intense instrumental adventuring for those open to music without boundaries.

NICK CAVE is one of the most consistently brilliant performers of the last 30 years, forever evolving yet always maintaining his integrity. His last album, 2013’s Push The Sky Way, was an amazing collection of oddball character studies and quiet meditations on tenacity that stands among his finest work, and in the normal course of events, the follow up album would have been highly anticipated. But these are anything but normal circumstances. The tragic accidental death of Cave’s teenage son Arthur last year is said to be present in every moment of the band’s 16th studio album, Skeleton Tree, and filmmaker Andrew Dominik was there to capture the entire process in this documentary about not only the creation of the record, but Nick’s search to come to terms with events and rediscover a reason for… everything. It’s a rare, unflinching, sometimes uncomfortable study of an artist not only unafraid to bare his soul to exorcise his grief through his art, but one possessing the fearlessness to allow the world to witness it.

The album will be released the following day, and the film will be shown once more on Saturday the 10th at Kino Pod Baranami.

If this song is representative of it, incredible things await.

It is not often that I hear something I’ve never heard before, but this sonic combination is, to my ears, without precedent. It is simultaneously dense with detail yet deceptively sparse, and the juxtaposition of the purity of the orchestra with the distortion of the electronic loops created by collaborator Warren Ellis (Warren being Nick’s not-so-secret weapon in recent years) sits underneath an absolutely achingly beautiful Cave vocal and combines to create something…

And all that is without addressing the emotional content.

And a just-announced last minute addition…

Just announced, this ‘pop up’ event arranged by Kraków’s House of Queer Arts, Lamella, features the Tel-Aviv DJ/producer David Pearl and the local art collective Niedzielni, who will transform the garden of a century-old house in the Dębniki neighborhood into something promised to be very different – a celebration of gay Arab culture, and a dance party (with a cash bar, by the way.) True to form, a certain amount of discretion is involved in such private events, and you must register via email to attend (click on the link for details.)