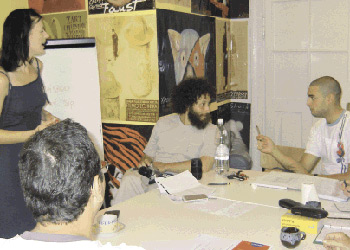 The teaching of Polish as a foreign language is a small but booming sector of the education market in Poland. For many years, private language schools taught primarily English and German to Polish students. Today more and more of these schools are gearing themselves up to teach Polish to foreigners. In many cases English and German speakers who were part of the wave who came to Poland to teach in the 1990s and early 2000s have now become the students. As the Polish state education system improves and young Poles acquire better English and German skills the demand for private language schools is diminishing. Many of these schools are jumping on the Polish-teaching bandwagon in an attempt to win back revenue.

Evidence of the rapid growth of interest in learning Polish is provided by Google Trends – an offshoot of the search engine giant that tracks the rise and fall of popular search terms on the web. The graph for the search term “learn Polish” bursts upwards in mid-2004 and then follows a slowly descending curve to the present. More detailed information about the location of people searching for “learn Polish” is revealing. The top two countries where the search is made are Ireland and the UK respectively, the prime destinations of the bulk of recent Polish economic migration. Poland is third (specifically Krakow), and Australia, Canada, and the United States follow. Friendships and romantic attachments between migrant Poles and locals are clearly among the driving forces behind the trend. Second- or third-generation Poles further afield getting in touch with their roots is another.

Małgorzata Świstowska, owner of the Gżegżółka school of Polish, estimates that the market for Polish language courses has grown by 50 percent since Poland entered the European Union in 2004. “Student numbers were small but steady before that time,” she says. “After 2004 there was a very rapid rise in student numbers, though this has now become a slower, steadier increase.” The number of institutions offering Polish courses has grown along with demand. There are essentially three options for the prospective student: dedicated private Polish language schools, such as Gźegźółka, which teach only Polish; the large private language schools, which primarily teach the popular European languages as well as Polish; and the state system, which offers intensive Polish courses through universities.

In Krakow there are only a handful of private schools offering ongoing semester courses in Polish, and most schools cater to the short intensive-course market. Semester courses typically consist of two 90-minute lessons per week and continue throughout the year. Intensive courses typically last from a couple of weeks to a month with several hours of tuition every day. Courses at Krakow’s Jagiellonian University are perhaps the most intensive, consisting of about 22 hours of lessons per week and continuing for one semester (February to June for example).

Characterising the average student of Polish is not easy, though it is possible to discern several distinct groups of customers for these courses. In Krakow one of the largest groups are foreigners who have chosen to live and work in the city. Of these the majority opt for semester courses: they do not have the time to study intensively and their commitment to learning Polish is long-term and unhurried. Another large group consists of those spending shorter periods in Krakow. Many of these are young Brits, Americans, Canadians or Australians with Polish roots, others are peripatetic types who simply enjoy spending a few months in the city every year. Intensive courses are the usual choice for this group. Foreign students on official exchange programmes make up a large proportion of participants on the Jagiellonian University’s courses. The university has active exchange programmes with institutions in several nations including Hungary, Japan and Korea.

Apart from those learning Polish because they live here, or as a way of reconnecting with their cultural heritage, there is a small but growing band of professional linguists who regard knowledge of Polish as a wise career choice. Felicity Raikes, a young British woman who already has a career as a translator of French and Italian, is one of this rare breed. “Polish is the sixth most widely spoken language in the European Union,” she says. “There is an oversupply of translators and interpreters for the top five Western European languages, but very few native speakers from those nations who can work in Polish.” The honey pot of Brussels’ EU institutions, with their insatiable appetite for translation and interpretation, is the likely destination of these students, but Krakow’s Jagiellonian University is an attractive and respected venue to start the journey. “I was afraid I would be the only linguist in the group,” continues Ms. Raikes, “but I’m not the only one to have spotted the opportunity.”

The notorious difficulty of Polish as a language is an issue that cannot be overlooked in this nascent industry. It is a widely quoted cliché that learning English is easy at first and only becomes fiendishly difficult when you get to an advanced level; Polish starts out fiendishly difficult and then gets harder. “It is not unusual for students to give up in despair after a few lessons”, says Małgorzata Świstowska, “but they often come back and try again when they have regained their courage.” She points out that different nationalities also face different problems.

Unsurprisingly, speakers of other Slavic languages find Polish relatively easy to pick up. Germans are usually among the best non-Slavic students because the grammatical structures of Polish are not so dissimilar to German. Romance language speakers (French, Italian, and Spanish) are also fairly comfortable with Polish grammar, but have difficulties with pronunciation. English speakers generally have the greatest difficulties and Australians are universally dreaded by Polish teachers.

One thought on “The Polish Language Boom”