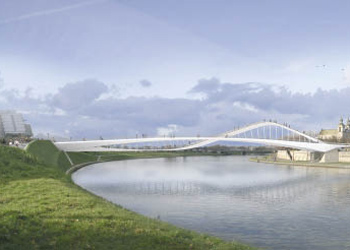 Krakow is to gain not one but two new bridges across the Vistula. Both will be cycle and pedestrian bridges and both have the potential to become strikingly modern landmarks for the city. The first bridge will connect the Kazimierz area on the north side of the river with the centre of the Podgórze district on the south. The second is planned to cross the river somewhere between the vacant Hotel Forum and the Manggha Japanese Art Centre.

Construction of the first of these two new river crossings has begun. The bridge connecting Mostowa Street in Kazimierz with Budzińskiego Street in Podgórze is being built at the same location as the former Podgórski Bridge (officially the Emperor Francis Joseph I Bridge), which was dismantled in 1925. The new Podgórski Bridge will reestablish a link between Wolnica Square and the historical heart of Podgórze, the Podgórski Market Square, that has been missing for almost a century. The old Podgórski Bridge was itself a replacement for the earlier Charles Bridge on the same site (destroyed by floods in 1813), and there are records of earlier bridges and fords at the same point since the 13th century.

The new Podgórski Bridge, designed by the studio of Krakow architect Andrzej Getter, will feature two separate walkways suspended on either side of a single 12-metre-high tubular arch reaching 150 metres across the Vistula. Getter has described the graceful design as being inspired by the shape of a leaf, as well as reflecting the massive steel arches of the 19th century Piłsudski Bridge less than 200 metres upstream. The project is expected to cost the city approximately 27 million złoty and is due to be completed in the autumn of this year.

The Podgórski Bridge project includes the renovation of Mostowa and Budzińskiego Street, both among the more neglected avenues in the city, and private developers have already begun work on rundown buildings lining streets that are soon to become bustling new thoroughfares. Younger residents of Krakow have already dubbed the new link the “Party Bridge,” recognizing its potential as a shortcut between the established nightspots of Kazimierz and the up-and-coming bars and restaurants of Podgórze.

The details of Krakow’s second new bridge are less clear. The original plan was for both bridges to be completed in 2008, but construction of the first did not begin until early this year and the location of the second is yet to be finalized. The initial vision was for a link between Ludwinowska Street on the eastern side of the Hotel Forum and the Inflancki Boulevard on the opposite bank. Engineering considerations required the site to be moved 100 metres upstream. Also, in the two years since the architectural competition chose a design, some have called for the crossing to be moved closer still to Wawel Castle, possibly to the north of existing Grunwaldski road bridge.

Wherever the bridge is finally erected it is certain to become a sensational new landmark for Krakow. The winning design from the architectural firm Lewicki Łatak is one of the most original bridge concepts of recent years. Like the new Podgórski Bridge, Lewicki Łatak’s vision is of a crossing with two separate paths. One of these will describe a gently inclined arch across the river, but the other has a sinusoidal shape rising to a peak eight metres above the water and then sinking to a trough three metres lower. Pedestrians will climb steps to a commanding view of Wawel Castle and Kazimierz from the middle of the river, while cyclists will be restricted to the second platform. Construction is likely to begin at the end of 2009 and the architects expect it to be completed by the end of 2010. The project is estimated to cost the city 29 million złoty.

ZIKIT (The Krakow Board of Infrastructure Management of Public Utilities and Transport) has committed money to the new Podgórski Bridge, but debate continues about funding for the second project. City planners remain convinced, however, that these striking schemes will bring new life to Krakow’s underutilised riverbanks. Krakow’s existing river crossings are primarily road bridges with cramped accommodation for pedestrians and cyclists, opening onto busy junctions on the Podgórze side of the river. The new bridges could be both aesthetic and functional boons for the city.