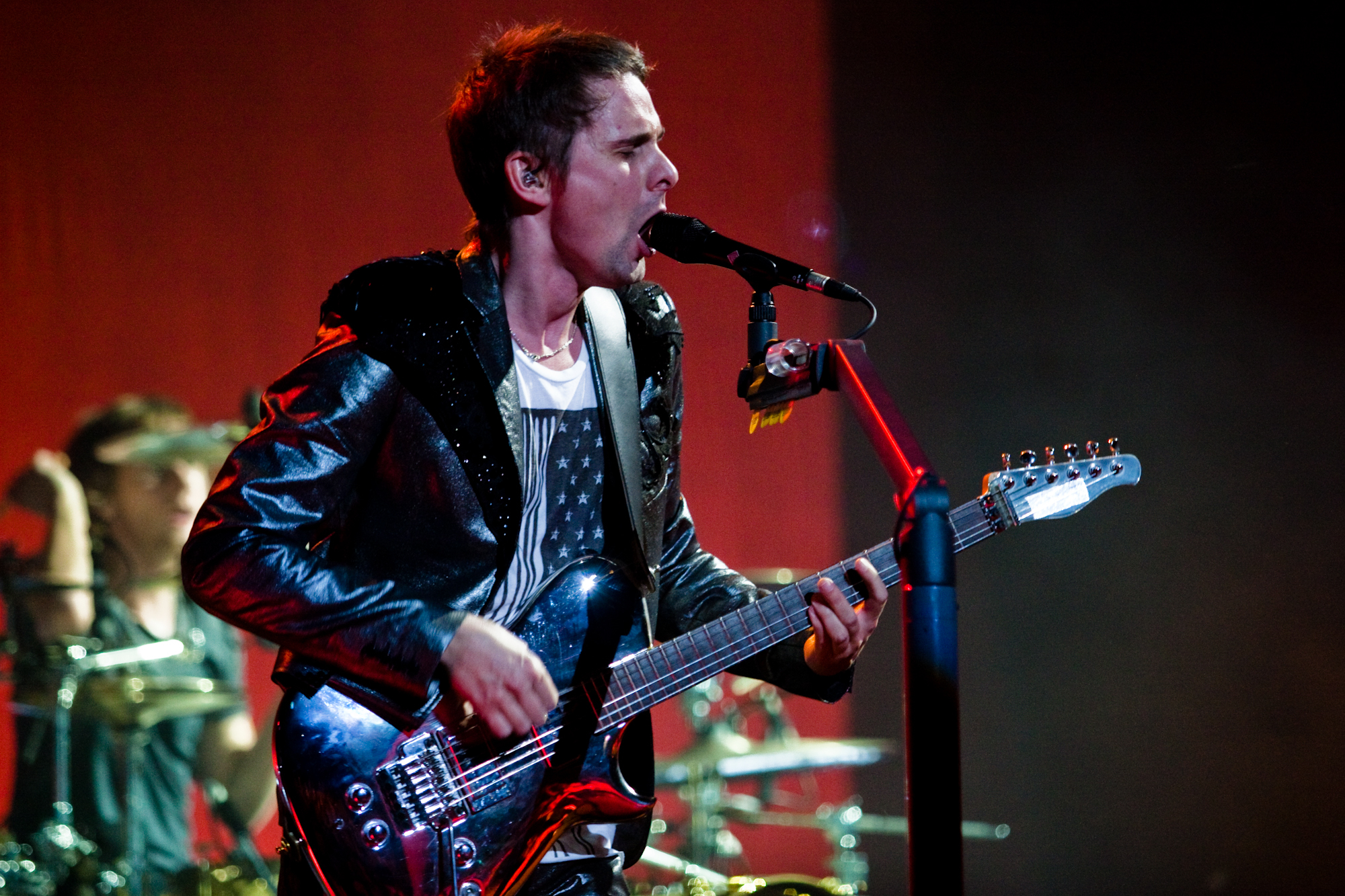 The biggest Krakow festival of the summer originally seemed a bit overpriced, but with the addition of Sunday’s MUSE show, it’s a tempting proposition even to those without deep pockets. A MUSE concert is an unparalleled visual spectacle – a kind of modern equivalent of the Pink Floyd extravaganzas of the 20th century. And that’s fitting because, musically, this British trio is pretty outstanding as well, marrying influences from the last century with modern technology, from the pomp of early Queen to metal, prog, and grunge, yet informed by current tends in techno and dubstep. Although their current set focuses heavily on last summer’s Drones album, older favorites such as “Uprising” and “Knights of Cydonia”, going all the way back to 2001’s “Plug in Baby”, are (almost certainly) guaranteed to receive an airing, and these are some of the greatest anthemic rock songs of the 21st century. At the risk of sounding inane, being in the middle of a large crowd singing along to these already-classic rock standards is a wonderful, unifying occurrence, a kind of throwback to a time when music and the concert experience was a “happening” that made us all feel as one. And if I can say that about seeing them in a basketball arena on a freezing cold winter’s night in Cleveland, Ohio, well… a summer night in Kraków should be pure magic.

Of course, if all that lovely hippie stuff ain’t your thing, the MUSE production is absolutely one of the great BIG GIANT rock shows you will ever see, so… you can always just dig the pretty lights.

It seems impossible that it’s been over 25 years since MASSIVE ATTACK (along with Tricky and Portishead, to name a few) midwifed a new genre called trip hop into existence with the album Blue Lines and the unique Top 20 single, “Unfinished Sympathy” (of course, like all artists identified with a particular movement, they hate the term.) Not the most prolific of artists, their last full album was 2010’s Heligoland, but a number of EPs and single tracks have trickled out since. Essentially a core duo with many guests, this year’s Ritual Spirit EP featured collaborations with artists consolidated via the Internet, notably Scottish duo YOUNG FATHERS, also appearing on Saturday. At the end of last month, the single, “The Spoils/Come Near Me” was released, featuring Mazzy Star vocalist Hope Sandoval (much like their 1998 hit, “Teardrop”, featured the Cocteau Twins’ Elizabeth Fraser).

Surprisingly, this will be their live debut in Poland, and guest vocalists have been known to pop in, so who knows what’s (or who’s) in store?

Fellow Brits THE CHEMICAL BROTHERS go back nearly as far, and every modern DJ/performer getting paid millions (I’m looking at you, Calvin Harris and Aviici) to hit “play” on their laptops in front of banks of dry ice and strobe lights owe them an enormous debt, as they were the first act to sell out large venues charging traditionally exuberant rock star concert fees for essentially doing the job of a DJ. Seeing them for the first time in New York in the mid-1990s, I was struck by how they fundamentally changed the concert experience into something purely visceral, devoid of intellect. Not that the music itself was without merit – on the contrary, their compositions had much more nuance and detail than most of the generic dance music that came before. But in this new approximation of “live” performance, where the only thing happening in real time was the mixing of prerecorded components, the intense high energy and party atmosphere was now more important than mere musicianship, and the emotional connection with the sense of occasion obscured the fact that there was actually zero % live music involved. And no one cared. Perhaps it was Gen X’s post-grunge hangover, but to the then new generation of would-be ravers, it just didn’t matter.

Twenty years later, this kind of performing is so commonplace that it’s only old guys like me who still feel compelled to point out the contrived nature of it all, much like that meme from The Simpsons of the newspaper with the picture of Homer’s dad and the headline, “Old Man Yells At Cloud.” THE CHEMICAL BROTHERS have made some great records – particularly when they collaborate with vocalists of excellent melodic sense such as Noel Gallagher or The Flaming Lips’ Wayne Coyne, and if you came to dance, you probably couldn’t pick a better soundtrack. In that sense, they’re the AC/DC of techno – you know what you’re going to get because they truthfully haven’t changed a bit in over two decades.

Australia’s SIA (né Sia Furler) is one of the most successful pop singer/songwriters of the last few years, but she established her credibility as one of the collaborators and vocalists on the first two Zero 7 albums, Simple Things and When It Falls – two of the finest, and most imitated, examples of trip hop the genre has ever produced. Of course, these days she’s much more familiar as the woman with the platinum blonde pageboy haircut and the collection of odd masks obscuring her face who’s responsible for such giant hits as “Chandelier”, “Elastic Heart”, “Titanium” (with David Guetta), and “Wild One” (with Flo Rida).

She’s a strange one, perhaps the definition of the old cliché ‘reluctant superstar’, but her Coachella performance this past April – her first full headline set in 5 years – was widely praised as not only THE best of the festival, but one of the most memorable in its 17 year history.

RÓISÍN MURPHY started out as half of the duo Moloko before striking out as a solo artist early this century. After a seven year hiatus, she’s now touring her second album in as many years, and her music is a blend of artsy pop, jazz, rock, and (here it comes again) Trip Hop. THE NEIGHBOURHOOD and CAGE THE ELEPHANT will both be carrying the torch for new(ish) American alternative rock, and DAMIAN JR. GONG MARLEY – the youngest son of THAT Marley – will be flying the Jamaican flag (perhaps literally). Representing the ‘home team’, if you will, are veteran superstars HEY (from Szczecin) featuring the legendary vocalist Katarzyna Nosowska, as well as some up and coming artists such as THE DUMPLINGS, KORTEZ, TERRIFIC SUNDAY, and more.

This local acoustic singer/songwriter originally from New Zealand incorporates a very unique blend of styles he calls ‘flamenco hip hop folk’ and his voice is very distinctive. He’s been an actor, a ballet dancer, and according to his bio (I swear), a “rabbit who traveled with the circus”, so if you check him out, be sure to say hello. Or maybe, “what’s up doc?”

There is always such a plethora of symphonic, classical, baroque, operatic, etc. music going on throughout our city that I generally avoid including it, mostly due to my own lack of expertise. But every day this month – sometimes including multiple overlapping shows on the same night – there are a wide variety of early music concerts encompassing everything from piano and organ recitals to string quartets and vocal and full orchestral performances, at great prices in every imaginable type of venue – concert halls, churches, synagogues, etc.
Check out the link for further edification, and grab yourself some culture…

Also this weekend: Kazimierz gets a new vinyl store! Paul’s Boutique, at Miodowa 4/7, will open its doors on Saturday at noon and to celebrate the grand opening, a kind of treasure hunt within the racks of records will be on offer. Hidden among the thousands of 12-inch riches will be some exceptional deals; for example, copies of the seminal Beastie Boys album that gives the store it’s name will be scattered throughout with the absurdly low price of 6.66 zł – and that’s just one example.

While you’re in the neighborhood, and shopping for music, why not visit the existing great shops High Fidelity (podbrzezie 6 – in the little alley between Miodowa and Brzozowa) and Record Dillaz (Joselewicza 11), along with the several stalls of vinyl at Plac Nowy, all of which are just minutes apart by foot?

Look for much more about the excellent record shopping in Kazimierz in the next print edition of Krakow Post (plug, plug…)