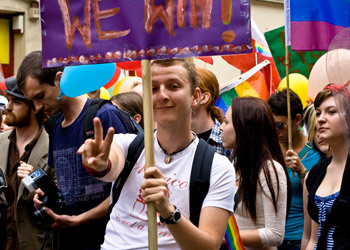 A little before 3 pm on Saturday, a thundering drumline preceded the entrance of perhaps the year’s most colourful procession onto the Market Square: the annual March for Tolerance.

An hour before that, a slight woman by the name of Aleksandra Sowa shouted “Hello my dears!” to begin the March. “Welcome to the March for Tolerance,” continued the Queer May committee member, “which for the first time will start from Plac Wolnica. We have extended the route, so that our ‘deviants and obscene behaviour’ can have more space, not only in the bushes of the Planty but on the streets of Krakow,” she joked.

Despite the lack of sunshine and air heavy with the threat of rain, the group Sawa was addressing was comprised of smiling faces, energised and ready to parade. Though most of the marchers were young Cracovians, there were some notable faces in the crowd, including SLD vice-president and Sejm member Joanna Senyszyn. Rainbow flags criss-crossed Polish flags, and colourful signs bore slogans like, “Two fathers are better than one,” “Homophobia can be treated,” and “Love knows no gender.”

Starting at Plac Wolnica in Kazimierz, the march made its way down Krakowska Street, passing by curious onlookers, most with cameras in hand, and even stopping a city bus for a few minutes. The procession then continued down Grodzka Street, turning the Royal Way temporality into the Tolerance Way, before finally arriving at their destination, the south side of the Market Square.

But like in previous years, the march was hardly met with open arms. Instead, two different counterdemonstrations, comprised mostly of angry young people holding signs with slogans such as “gayness prohibited,” threw chairs, eggs, potted plants and whatever else was handy at the marchers, before being restrained by police.

The so-called “March of Normality” began on the Market Square at 1 pm, organised by Narodowe Odrodzenie Polski (National Rebirth of Poland), a radical nationalist party. The marchers were joined by the All-Polish Youth, another far-right nationalist group. Members burned an EU flag under the statue of Adam Mickiewicz while shouting obscenities at the approaching marchers.

All three of Saturday’s manifestations were perfectly legal, as the organisers had filed all of the correct forms in order to march. Nonetheless, the nature of the counterdemonstrators required a full police force, complete with riot gear and gas canisters, to form a human shield around the tolerance marchers throughout the procession. Though this did not stop the occasional egg from hitting some marchers, it did prevent full-out violence between the two groups. Of the counterdemonstrators, police arrested 15 people for attempting to block a legal demonstration, but the tolerance marchers were allowed to peacefully disperse.


One thought on “March for Tolerance Reaches Square Again”