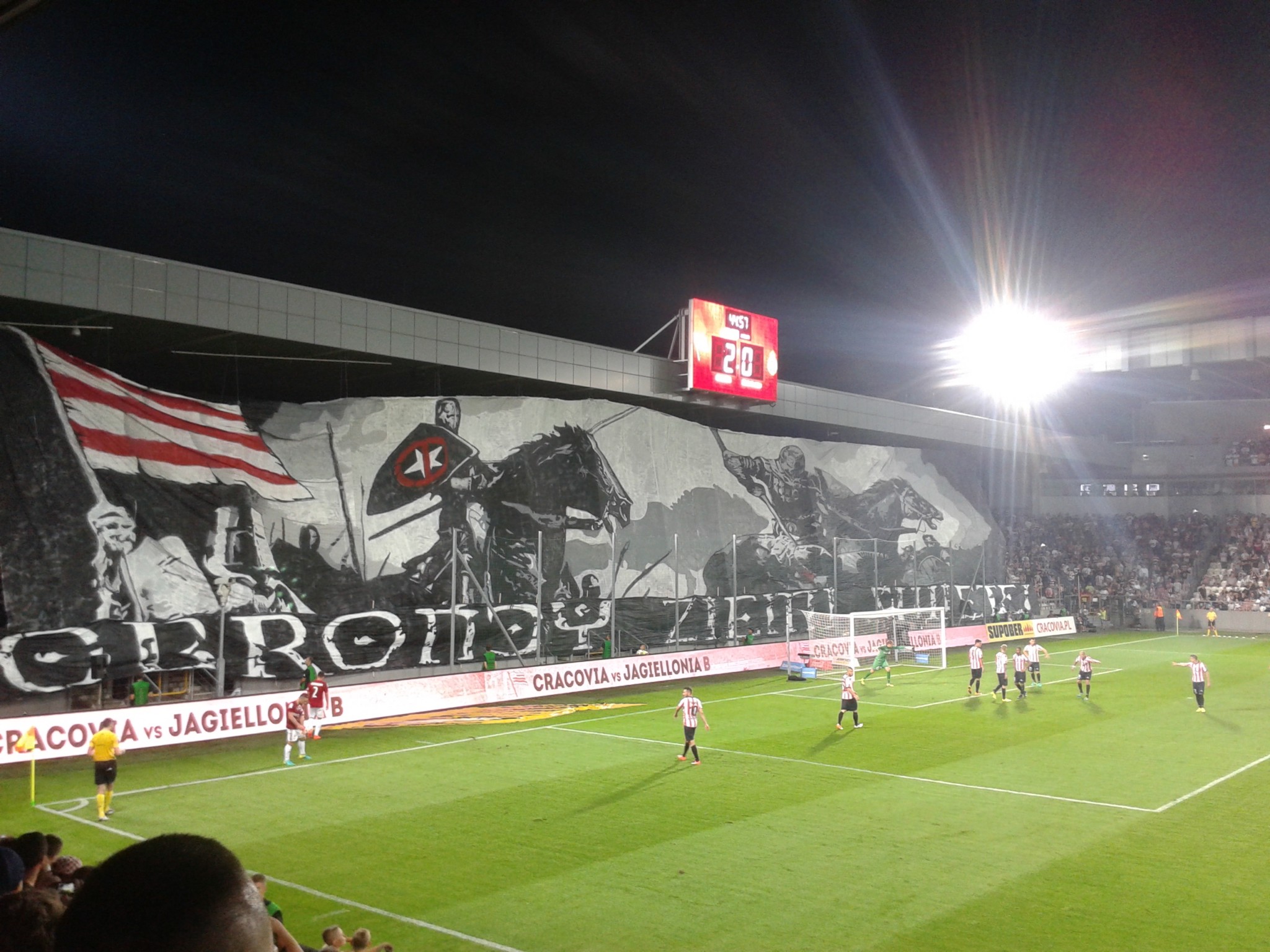 After the 192nd Grand Derby of Krakow – the grudge match between Krakow’s two rival football clubs which has been running for nearly 100 years – Cracovia and Wisła Kraków find themselves in unfamiliar positions.
Cracovia are looking to consolidate their most successful season in decades, buoyed by the €5.5m windfall from the sale of Euro 2016 surprise talent Bartosz Kapustka (Polish football’s most expensive export in history) to English champions Leicester City.

Wisła, on the other hand, are in one of the roughest patches they’ve had in living memory. Their generous but secretive benefactor Bogusław Cupiał finally tired of his direct involvement and sold the club this summer after seasons of decline typified by fan boycotts and a failure to replace ageing stars turned them from European representatives to domestic also-rans.

Wisła fans have fair reason to fear that the dark clouds over the north side of Błonia have not yet cleared. They were running perilously close to relegation form until the appointment of coach Wdowczyk rescued their 2015/16 season, and they suffered the embarrassment of having to move their club offices 90km away to Katowice. President Cupiał sold the club to a consortium headed by businessman Jakub Meresiński and, funnily enough, ex-Cracovia midfielder Marek Citko. The new owners have failed to give detailed information on their plans for the club, delayed the takeover presentation and, worryingly, only turned to Wisła after an attempt to buy out Korona Kielce failed at the end of last season – seemingly due to a lack of funds and players’ concerns upon hearing proposals to halve their wages.

Even more alarmingly, on the day of the derby the prosecutor’s office of Częstochowa announced that a ‘Jakub M.’ was facing a possible 10-year jail sentence, pending investigation into money laundering and a 10m PLN tax fraud case. National radio station RMF FM also uncovered a court case in which Meresiński was found guilty of falsifying his high school records on a university application – so Wisła fans are worrying their side has fallen into the hands of somebody you wouldn’t buy a secondhand bicycle from. Whatever the outcome of this investigation, these are without question the most insecure days of the club’s recent history.

Cracovia’s difficulty is certainly a much happier one, particularly in light of… well, most of the post-World War II period. Quiet investment in youth development and smart management of the club by local IT magnate Professor Janusz Filipiak paid off dramatically last week, as Kapustka’s transfer provided a windfall that will go to keep the club as one of the healthiest-run in the league and hopefully provide funds for a replacement or two. The difficulty, then, is finding those replacements for this midfield engine and consolidating last year’s 4th place. Beyond that, the brutal judgement dealt by the club’s first European foray and its conclusion in the Europa League’s first qualifying round, was disappointing in its swiftness. Regardless, it’s a historically rare moment for Cracovia to go into a derby as clear favourites. Often the goal of a season for Pasy is survival and a reasonable showing in the derbies – there’s now a sense around the club that they are entering a sustained period among the league’s elite. 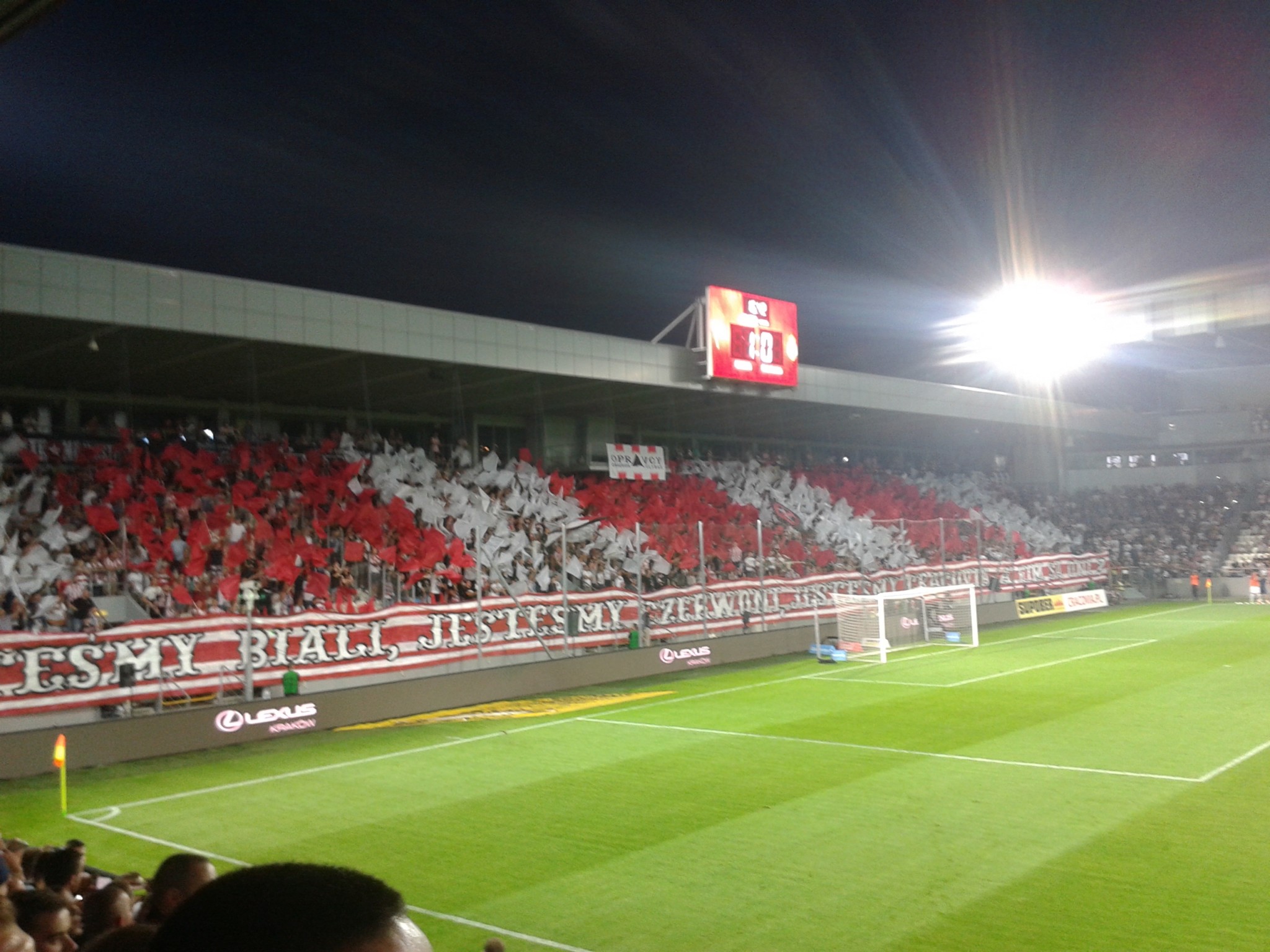 So to Kałuża Street then, home to Poland’s oldest football club and named after arguably both nation and club’s most important ever player, Józef. The exhausting, close heat of Krakow’s midsummer has been blown away by an evening breeze as we stand in 30-minute queues just to get through the gates. A Friday evening kick-off isn’t common in top-flight European football, but adds a certain boozy sway to the atmosphere here. It’s a rare occasion that away fans are allowed into games of this profile in Poland, but both sets of fans have behaved well enough of late that the northwest corner of the stadium is today a wall of black, the uniform of the Wisła Ultras. Having been escorted by a phalanx of riot police across Błonia long before the kick-off, they’re in place in good time to watch the home stands still filling as the Cracovia Hymn plays the teams on, the a cappella screaming of the line ‘Nigdy nie zejdę na psy’ (roughly translated ‘I will never go over to the dogs’, dogs being Polish slang for the police force that gave Wisła their nickname of White Star) necessarily ten times more intense than usual. If any more excuse were needed to scream abuse towards their guests, Cracovia fans find it when a minute’s silence for recently-deceased ex-Archbishop of Krakow, Cardinal Francis Macharski, is broken not 5 seconds in by classless chanted threats from the away end.

The match itself, once it gets underway, doesn’t take long to fall according to the odds. Straight from kick-off, Cracovia push towards goal, and 60 seconds in, Wójcicki drags the ball back to Marcin Budziński, who curls it at the near top corner from 30 metres out. It hangs slowly down, bounces off the crossbar and past Załuska in the Wisła goal and just like that, Cracovia have made their mark. Able to relax, the home fans concentrate on exploring their full repertoire of musical civic animus, the larger part of it aimed at stocky Wisła icon Patryk Małecki. For his part, the winger plays up to the role of villain for the day, working himself into a petulant state that seems destined only to become a self-fulfilling cycle of frustration.

The home side maintain the early pressure and dominate the first half. Fans from Gdynia and Poznań, the other arms of the ‘Great Trinity’ of Arka, Lech, and Cracovia, are in town for the day to celebrate with their allies. A child is led down the steps by his sheepish 15-year-old brother, the latter apparently overwhelmed by the sudden realisation at the full implication of his duties as responsible adult among this tumult. Occasionally, the presence of the guests is remembered, and a chant along the lines of ‘why so quiet?’ goes up. Perhaps the lack of alcohol at today’s game (other than for those who’ve smuggled a mini bottle of vodka past security) is hitting the crowd, pre-match drinking sessions turning into bleary hangovers following the muggy, sweaty day. On the field, Wisła’s good midfield movement – not least by that man Małecki – combined with Cracovia’s trademark edge-of-the-seat defending prevents the home side from enjoying their lead for much of the second half. A turgid, static performance by the two Wisła strikers mean none of this comes to anything tangible, however, and another new arrival in Krakow this summer, Mateusz Szczepaniak, turns in a cross to punish this and double his side’s lead on 43 minutes.

Half-time sees one change, as Wisła coach Dariusz Wdowczyk tried to add some pace to his attack by replacing the creaking 33 year old Paweł Brożek with Mateusz Zachara, back in Poland after a sojourn to the Chinese league, and indeed it is the visitors who control matters in the second half. For once the Cracovia defence, inspired by the loping yet dominating figure of Miroslav Covilo playing in a holding role, keep attacks from having any serious threat and the quality of football begins to fall throughout the half.

Suddenly, two minutes from time the constant jibing from the crowd at Małecki reaches an inevitable flashpoint. A cheap foul right in front of the home fans earns him a yellow card and a barrage of plastic cups from the stands. Covilo, among others, approaches the crowd to appeal for calm and to some extent it works – the sector contents itself with exploring the deepest recesses of Polish curses to adequately describe their bête noir. It’s no secret that this treatment can work either way – antagonizing the target into a red card offence or scuffed shots, or inspiring them into dragging their team to success. Here, we almost get to witness both. Straight from the dead ball, Cracovia lose the ball to a well-prepared Wisła counter-attack, a near-copy of the game’s second goal, as Cywka on the right wing crosses the ball in for an easy conversion by the man himself. Four minutes of injury time are announced, yet either through lack of planning or a misplaced commitment to sportsmanship Cracovia seem reluctant to waste any of them through retaining possession. Added time sees chances, or at least the nascent moves of chances, for both teams, but this Krakow Derby ends with the same scoreline as the last.

Dour but emphatic and likeable Cracovia coach Jacek Zieliński opens his post-match conference succinctly: “It’s simple – Cracovia rule in Krakow.” Captain Piotr Polczak echoes this sentiment, speaking of “changing the balance of power” – and, looking at where these clubs find themselves and what hope apparently lies for the immediate future, it’s hard to disagree. 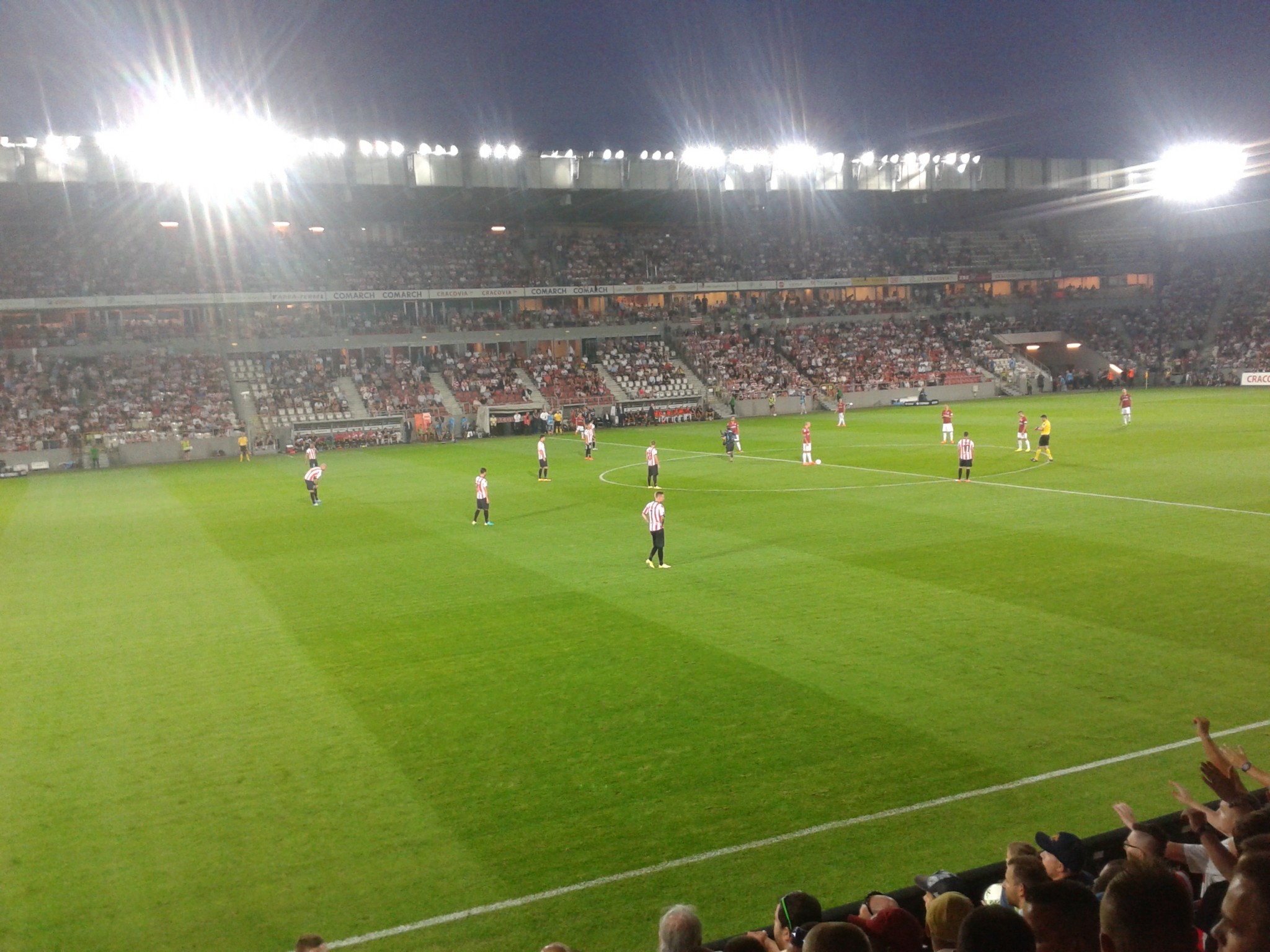 A footnote: There’s a strange reluctance towards domestic football in Poland. Marcin Stefański, former director of the Polish FA, memorably if indelicately called it the ugly daughter of the nation. “‘OK, we have it, so we have to have it, but [the parents] don’t really want it.” I’m struck by this comment as I watch other games at this ground (full disclosure: I’m a Cracovia season ticket holder) and see crowds of 6, 7, 8000 – barely half the capacity. I think about this in comparison to the crowds I saw gathered in most of the city’s pubs for the European Championships this summer. A good number of those players that people were fighting for floor space to watch play in the Ekstraklasa – and almost all of them played there at some point. There’s a pleasure in seeing a 19-year-old kid run the game in his country’s first game of an international tournament and thinking ‘I saw that kid come on for Boljević, two years ago, against Widzew ‘. It costs 1zł to watch your first match at Cracovia, 5zł at Wisła, so there is little excuse not to try. The challenge for Polish football lies in persuading casual fans of the incomparable experience of the stadium – that the days of both corruption and stadiums being terrifying experiences for all but the hardcore are gone – turning 4-figure crowds into 5-figure ones. Euro 2012 bequeathed the country (though, perhaps fortunately, not our city) with a handful of stadiums which are impossibly big for their purpose. Perhaps it’s a pipe dream to hope for a rush of interest, that the domestic league will become as important to the average Pole as La Liga or the Premier League, but for sure until this indifference changes we will continue to see Polish clubs struggle out of Europe in early qualifying rounds to teams from unspectacular footballing nations.