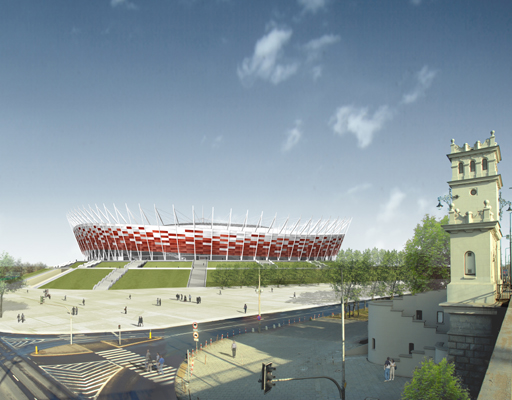 After months of waiting and speculation in various media from Gazeta Wyborcza to The Guardian, UEFA has finally announced the list of host cities for the 2012 European Championships.

At a press conference this morning in Bucharest, UEFA President Michel Platini announced the final choices for host cities for Euro 2012: for Poland, Warsaw, Gdańsk, Wrocław, and Poznań are confirmed. Unfortunately for Krakow, this means the city, along with Chorzów, is now out of the running.

However, Krakow Mayor Jacek Majchrowski took an optimistic tone at a press conference in Warsaw, saying that overall the preparations for the tournament will be beneficial for Poland, regardless of which cities host individual matches. “Everything we’re doing is because Poland does not have good stadiums,” and not exclusively for the Euro tournament, he stated. The mayors of all of the chosen cities expressed joy at the selection and confidence that their cities will be prepared.

Polish Minister of Sport Mirosław Drzewiecki stated that he is “very pleased with the decision [made by] UEFA. I wanted the Euro to take place at all the newly-built stadiums. Unfortunately Chorzów and Krakow have dropped from the competition, but I want to stress that we will not cease cooperating with those cities and we will keep creating a synergy between all six.”

The verdict for Ukraine is not so certain. However, despite how hard the economic crisis hit the Ukraine, Platini assured that “UEFA is determined to organize the Euro Tournament in Poland and Ukraine.”

Kiev has been confirmed, while Lviv, Donetsk and Karkov will have to until the 30th of November for a committee to determine whether or not the cities will be ready to host matches. If the candidate Ukrainian cities are not able to meet the November 30th deadline, the tournament will only take place in six cities: four in Poland, two in Ukraine. Dnipropetrovsk and Odessa are out of the running.

At the conference, Platini also discussed issues of racism. A referee will have the ability to stop, suspend, or abandon the match because of outside interference of any kind, which will be followed by a legal investigation. “We will not allow any actions of discrimination,” Platini stated.

See also: Platini At Peace With Poland For Euro 2012