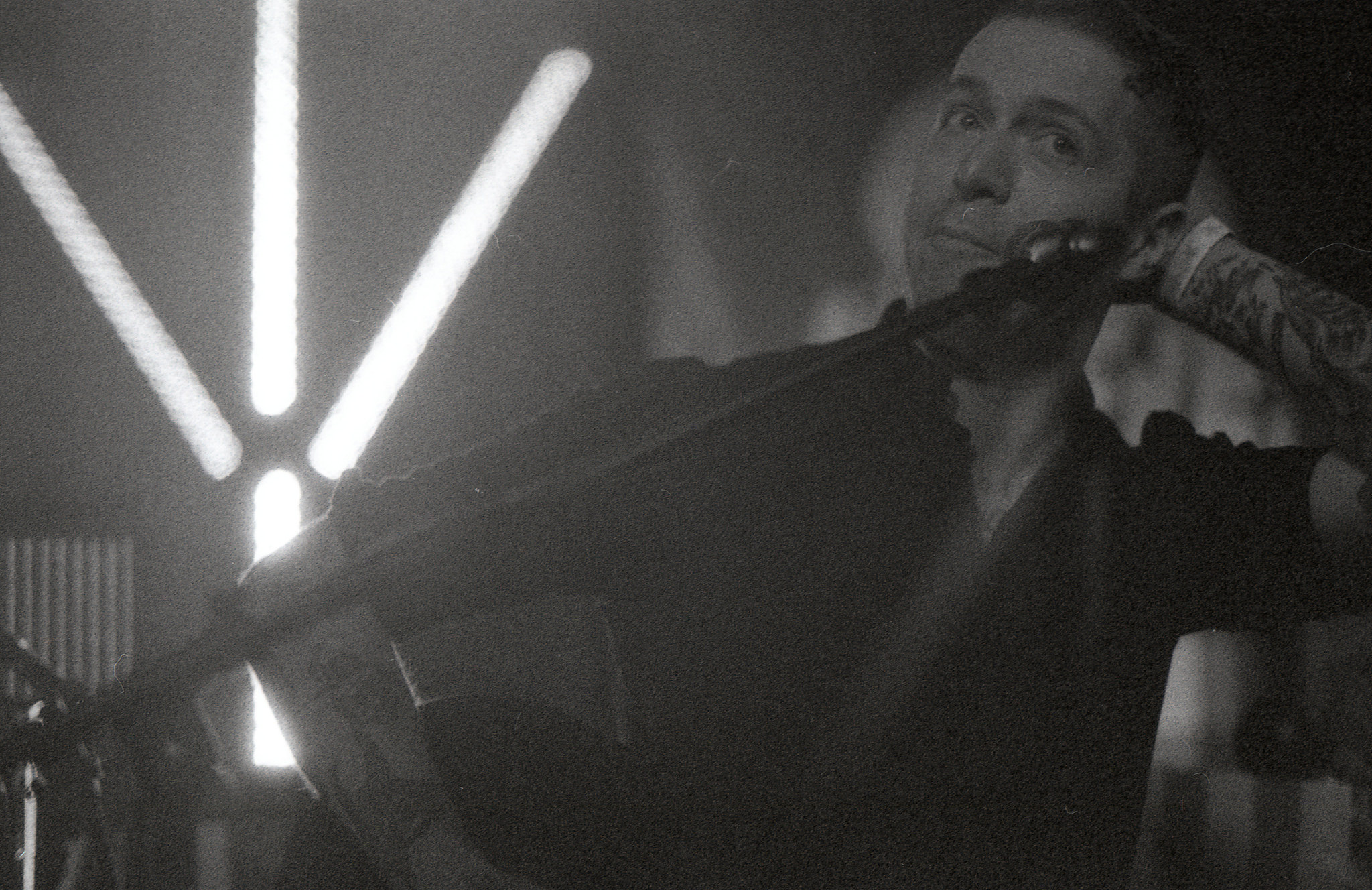 If you know anything at all about KING DUDE, it’s probably more to do with him being described with big scary words like “Satanist” and “Luciferian” than from hearing his actual music. That’s a shame, as it does a disservice to a very talented singer/songwriter. And when I say “he”, I’m really referring to Thomas Jefferson Cowgill, the main man of the (usually) four piece outfit known as KING DUDE. He had a long history as a metal singer, but since 2010 has released five full length albums (and a number of EPs) of the kind of dark folk rock drawn from the same Appalachian/Celtic/Carpathian/Germanic/Southern Gothic wellspring as the best ghost stories. He’s more Nick Cave or Johnny Cash than Anton LeVey or Marilyn Manson. Sure, old Beelzebub makes the odd appearance, but the songs are more about ILLUMINATING and CELEBRATING the darkness we all must endure, and not so much a tribute to any particular belief system or religion.

If, back in the 1990s, you were a fan of Current 93, Death In June, or any of David Tibet’s projects – but have since lost touch with that genre and weren’t aware that such new music was still being created, this show will be comfortably familiar, even while presenting something new.

In fact, the evening will commence with several excellent Cracovian neofolk bands cut from the same cloth, so by all means arrive early. There is a unique magic and a dark beauty to be found within the sense of community at such shows, and interest has been so high that the venue had to be moved to the bigger Rotunda.

Cowgill’s reputation as a performer is certainly one of the reasons why; armed mostly with acoustic instruments and a focus on melody and story, he routinely opens for some of the world’s biggest metal bands – Sweden’s Ghost, for instance – and has no trouble capturing the attention and imagination of a large crowd anticipating crashing drums and shredding solos.

Don’t let the Satan stuff put you off. This is nothing less than the continuation of a living folk tradition inherited from greats like The Carter Family, Woody Guthrie, and Phil Ochs – albeit shot through a slightly darker prism.

“8bit” or “chiptune” are interchangeable labels for a type of electronic music created either partially or completely from, for, or in homage to, the sounds associated with outdated and archaic video games and personal devices. Got that? It’s, quite literally, the soundtrack of your childhood.

No, really…I’m not kidding; there is an entire genre of music dedicated to the bleeps and burps that your Nintendo used to make. That’s not to say that they’ll be covering the Super Mario Bros. theme – the aim is to use the archaic tech to create something  original. Admit it – as daft as it sounds, you’re intrigued, right?

EPIC SCHMETTERLING are a French trio, and although I’ve written about some very odd musical instruments through the years, I can say without reservation that this is the first band I’ve ever encountered with a “Pocket Gameboy/Playskool Guitar” player!

The price is right (as in free) so why not?

Klub Odeon is celebrating their weekly “High Heels Night”, with the good time street ska of the 11 piece Bavarian band (!) MAX HURRICANE AND THE ESKALATORS. These guys combine ska, jazz, r’n’b, and cabaret to provide a perfect party soundtrack alternative to the usual loud dance music.

In addition, the club is offering the kinds of drink specials that would cause discrimination lawsuits in America  – if you happen to be female, your spike heels will get you a freebie right off the bat, there are half-off specials, and heck, if you bring 5 of your galpals, all of you get free shots of vodka till midnight. (There’s a whiskey special for men as well, by the way.) And that’s just the tip of the iceberg. After a few hours of serious drinking and skanking, DJ Toya will take over the party. But you probably won’t remember it.

There is such a plethora of excellent jazz in Kraków in any given week – much of it local – that I often find the task of sorting through it all slightly paralyzing; much like the classical scene, in a perfect world we would devote separate weekly columns to each – if only time and resources allowed. Still, we do what we can.

Kraków’s Marek Krupa is a diverse musician known for collaborating with both live instruments and DJs, with a style that encompasses smooth and funky jazz as well as free improvisation. He was one of the first Polish musicians to use the electronic saxophone, and if you arrive before 22:00, it’ll only set you back 10 zloty to hear some fine jazz.

PARKWAY DRIVE are one of the more successful veterans of the early 2000’s metalcore scene, a scene which now, it must be said, is littered with the corpses of the irrelevant. Not only have they toured the world over, featuring in various festivals and the Vans Warped Tour, but their latest album (2015’s Ire) went all the way to #1 on the mainstream chart in their native Australia (where four of their five albums have been Top Ten.) That very unusual mainstream success for a band in a genre more identified with screaming and growling than memorable hooks is probably due to their willingness to expand the parameters of their sound. The Ire album, for example, features actual traditional rock vocals and melodies for the first time. Having just rereleased it in expanded Deluxe form, their set will undoubtedly highlight the thing that sets them apart in a genre that so often is derivative.

BURNING DOWN ALASKA are a German band with more of a hardcore punk edge, but Britain’s BURY TOMORROW may be the breakout act of the night. Their recent Earthbound release is garnering comparisons to metalcore giants like Disturbed and Avenged Sevenfold, and next time through town, they won’t be at the bottom of the bill.

…and although not in our city, one of Poland’s biggest events is happening this weekend not too far away. The annual OFF FESTIVAL in Katowice (Dolina Trzech Stawów), Friday through Sunday, features a bill to rival any in the world. Check the link for complete details, but the juxtaposition of the experimental and the familiar, the Polish with the International, and the very old with the very new, make it a truly unique event.

Personally, there are two performances at this festival that make it special; the reunion of 1990’s British shoegazers Lush and the legendary Polish progressive rock band SBB performing their 1975 classic Nowy Horyzont in its entirety.

Back in the 90s, Lush were often dismissed as the lighter, more commercial face of the shoegazer world – somehow less credible than peers like My Bloody Valentine and Slowdive. A funny thing happened over the years, though; a communal recognition that, when it came to songwriting, Miki Berenyi and Emma Anderson were clearly superior to their reverb-chorus-drenched brethren. Their stuff not only held up, it sounded fresh to a new generation who based the ‘Nugazer’ resurgence of early this century largely on Lush. Sadly, the suicide of drummer Chris Acland two decades ago, as well as Miki’s retreat from public life all but insured that we would never get the chance to see the band again. And then…

This year, a fantastic hugely-successful box set led to Blind Spot, an EP of new material that effortlessly recaptures the magic that this band possess. This is their only scheduled date in Poland, and it will be special.

SBB began as the backing band with legendary Polish singer/keyboardist Czeslaw Niemen, but since 1974, they’ve released somewhere north of 75 albums! Perhaps unsurprisingly, many of those consist entirely of live improvisational jazz, and honestly, some are downright unlistenable. One of the hazards of going to an SBB concert is that you can get caught in one of their free form experiments, and (depending on your personal taste of course) wish you’d opted for the less painful root canal instead.

However – the band’s second album after parting ways with Niemen, Nowy Horyzont, is an absolute killer, and a touchstone of Polish progressive music. For a band that has always valued improvisation over composition, it will be a unique and historic event to see this album performed live.

As for the rest, well, as you can see, there really is something for everyone…