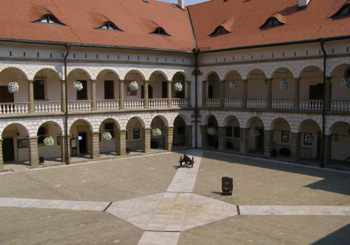 Krakow, like most cities, can occupy your time quite well. But a trip by motorcar past the city limits can connect you to the richness of Poland in a way that buses or rail cars never will. Rolling hills, green forests and striped fields mix with small towns and roadside bars (eateries for travellers and locals). The sight of storks perched in their large nests high above on telephone and electrical poles is a charming feature. And, there are few tourists. We’ve organised these tips to help you see more of Poland. Enjoy your drive.

Rule No. 1: Plan early! With summer road construction and works for the Euro 2012 football matches, roads will be full. Krakow to Wrocław, for example, may take the usual four hours on an upgraded road. But there’s little chance of a four-hour drive from Zakopane to Krakow on a Sunday night. Plan on seven or even eight.

On the roads it may seem you have accidentally turned on to a Formula 1 track. Tailgating is extremely common, and passing seems chaotic. Don’t be stressed – just slow down, move to the right and let cars pass you by. Drive defensively. Take turns driving.

More important notes. Don’t trust GPS completely. Take an updated paper map as well. Some GPS units see planned roads in Poland as actual roads. Gas stations are plentiful and prices are usually competitive. They may not always be easy to get into and out of, however, so be aware of other traffic and people. See the “Laws” section for more, but don’t forget that if you’ve had any alcohol it’s best not to even think about driving.

If you can get out of the cities, you’ll find driving Polish country roads to be a wonderful experience, full of beauty and adventure.

Navigating Polish roads is not as daunting as some have made it out to be, but nonetheless there are some things you’ll have get used to if you plan to drive in Poland. First off, you must have a valid driver’s permit from your home country or international driver’s permit. Like most countries, Poles drive on the right side of the road. Speed limits are posted clearly on roads, but if they are not, a general rule is 50 km/h in towns, 90 km/h on smaller roads outside urban areas, and 130 km/h on highways. Watch for reduced speed zones. They can change quickly from full speed to in-town speeds over a short distance. Headlights must be on at all times (day and night), and seatbelts should be used for all passengers. Cars must be equipped with a fire extinguisher, a first-aid kit and a hazard-warning reflective triangle.

Finally, if you plan to have a drink with dinner and drive, remember that permitted alcohol content in blood is 0.02 percent – no exceptions. Polish police are not usually forgiving, whether it comes to speeding or drink driving. No matter how good a story it may make one day, you really don’t want your holiday ruined by a night in a Polish jail.

Car rental in Poland ranges in price, from cheaper compacts to pricey luxury vehicles, but most will agree it beats getting lost in Krakow’s PKS (national bus service) station any day. It’s also getting easier to rent than ever before. There are several car rental companies in Krakow to choose from, but they all operate on a very similar set of rules.

First of all, the driver must possess a valid driver’s license, and have been driving for at least one year. If you’re visiting from outside of Europe a valid international driver’s license is necessary. The minimum age for renting a car usually starts at 21 years, going up to 28 years of age to rent the more expensive cars.

Rental fees vary from company to company, but in general you can expect to rent a small car that’s enough for a day trip for about 200 PLN for 24 hours.

Most companies include auto insurance in the price, but make sure to ask first. If you’re paying with a credit card, check with your card company about insurance outside of your country. Also keep in mind a refundable deposit is required, usually from a credit card at about 1,000 PLN. You can also keep your eyes on the road, and not on your map, by renting a GPS system for your car for a small fee. Make sure to tank up and return the car on time to avoid any surprises on your final bill.

Be sure to check out the exclusive deals with Avis and Acecar that the Krakow Post has arranged for you.

Niepołomice (see photo) used to be a hunting lodge for Poland’s Renaissance monarchs. But in truth, it’s more like a full-blown castle. The lodge would be worth a visit in itself, but it has an added trick up its sleeve in the form of one of Krakow’s best collections of Polish art, currently on loan from the Cloth Hall Gallery. Enjoy stirring canvases from the 18th and 19th centuries. Afterwards, you could go for a stroll in the Proszowo forest, which has a bison sanctuary.

Just a couple of miles north of Ojców is the castle of Pieskowa Skała, which looks like it might be the lair of Count Dracula himself. The residence was originally one of the “Eagles Nests” that protected the region during the medieval era. Altered and expanded many times over the centuries, the castle boasts a princely courtyard, and inside there is a delightful exhibition of art and artefacts culled from the Royal Collection at Wawel. A real standout.

Tyniec Abbey was founded in the eleventh century by King Kazimierz the Restorer. It crowns a bulbous, rocky escarpment above the Vistula, and its strong defensive position elevated it to fortress status during later epochs. Getting to the Benedictine Abbey is straightforward enough, as it’s just 15 minutes or so from Krakow’s centre. Pack a picnic or head up to the monks’ very own restaurant, which boasts produce sourced from the order’s private estates.

Half an hour’s drive from the city centre is the lush valley of Ojców, the whole of which is protected as a national park. It’s a very idyllic place, with ruined castles and villages full of quaint wooden houses. Rising up out of the hillsides are fantastical limestone rocks. These have a distinctly Tolkienesque flavour and you really feel that Frodo and his chums could emerge from behind a boulder at any moment. The ideal stopping point is the lovely village of Ojców, which has several restaurants and gateways to trails through the valleys.