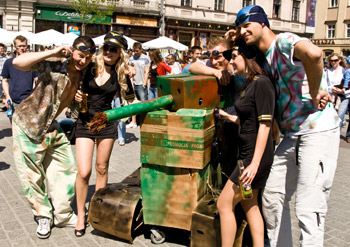 Each year, Krakow’s university students take over the city for one weekend, during which time (almost) anything goes. The event, called Juwenalia, is even sanctioned by the city, as the mayor himself hands over the keys to the city for the weekend.

Today students took over the Market Square, in a gathering that began at 10 in the morning and will go on through the afternoon. Students, dressed up in various costumes, from African warriors (complete with cardboard elephant) to soldiers to construction workers and witches, spend the afternoon listening to live music and stimulating the healthy rivalries between the city’s academic institutions.

This year’s festival will continue through Sunday the 10th, during which Cracovians can expect open-air concerts, bar-b-ques in front of all of the student dorms, and general madness as parties erupt all over the city. And the best part: one does not have to be a student to take part, though a healthy love of Polish piwo certainly helps.