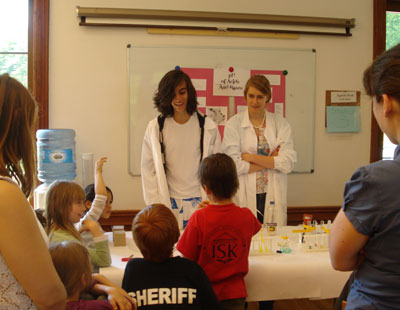 Many families who arrive in Krakow from abroad are faced with the question of what’s the best school for their children. If they are not sure of how long they will stay, some may consider sending their kids to one of the two international schools in the city, instead of to a Polish state school, where they will first of all have to learn a new language.

There are several advantages to the international choice. Naturally, if the family decides to move away soon afterwards, the children can follow their education in English in another international school elsewhere. The teachers at such schools are in tune with the problems of a global and diverse society. Multi-ethnic and international pupils are in themselves the greatest assets of such establishments.

If a family plans on staying longer and their kids have enough time to learn the local language, state school may be a good choice. The advantage of a local school is that one is not alienated from the society one lives in, which may happen if one follows the international education path.

Above all, both schools answer to the needs of an international group of managers and directors, enriching the ex-pat community in Krakow. They were both started after 1989, the date that marks the beginning of the rapid transformation from the centrally planned economy to the free market.

I visited the ISK during “Pi day,” during which the school was full of kids, happily concerned with their Pi pies, moving between the spacious open hall and the cafeteria. The whole building looks almost like a palace and it is surrounded by trees and a well-kept lawn, all fenced in and secure. Everywhere on the walls hang colourful pictures made by students of every age and skill. Mrs. Mleczko, an experienced primary level teacher and now the main assistant of director Erica Mazzeo, with Polish blood in her veins, kindly shows me the building where just a few steps from the loud hall, focused and quiet children study their subjects. Mrs. Mleczko also takes me to the new science department with the funny-looking metal pipes, which I remember from my high school, although I don’t exactly recall their purpose. The school has students from France, England, the USA and other countries. Here they are able to study their native languages, including Polish. “Our international school makes it easier for our students to be the future citizens of the global world, which now much more than ever before is free from national and cultural barriers,” says Erica Mazzeo.

If students wish to continue their studies, the school enables them to acquire a High School Diploma and Advanced Placement International Diploma (APID) certificates, which are widely respected by many universities around the world.

With Jonathan Merrett, head of BISC, I found myself in the middle of a discussion about what it means to be a part of a certain culture or nation. Jonathan has moved from one international school to another, finally settling, at least for a while, in Krakow. His own children are theoretically English, but with the constant changes of home, Mr. Merrett admits that their experience is different from other children that are raised and educated in the same homogeneous environment. “What is new in our school are Polish children coming back from England whose parents decided to place them in the international school instead of a Polish one,” he tells me. Students follow the British programme of learning, and the International Baccalaureate Diploma Programme, proposed by the school, enables them to enter higher education.

But not all parents that speak English at home send their children to an international school. Scotia Gilroy, working daily at the Jagiellonian University, feels that it may harm her child since he wouldn’t feel attached to the local people and culture. “Milo didn’t know what ‘don’t do it’ meant in Polish, so the teacher asked me and my husband to come and explain to him that when the teacher says “Nie rób tego,” it means that he should stop jumping on the piano,” laughs Scotia and her husband Soren. “Of course when you are not in Krakow for a long time there is no reason to send kids to the local school,” admits Scotia. “I think that because our son is so self-confident and straightforward he doesn’t have a problem with contact with other Polish children, who may not understand what he says but find this less important, but I know a mother whose child is fragile and not so easygoing with new friends, and the language and cultural barrier causes frustration and struggles in joining a group.”

It seems that families planning to find the best school for their children – international or local – have many factors to consider before making that crucial decision.