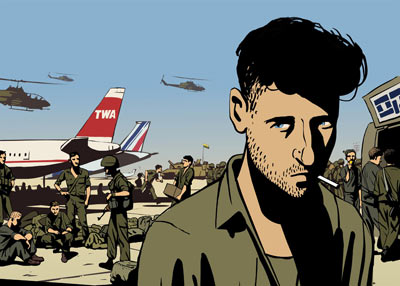 It’s strange to call a film so visually spectacular and whose narrative flows with the smoothness of well-written fiction a documentary, but that is essentially what Ari Folman’s Waltz with Bashir is. Based on the Israeli director’s own experiences in the 1982 Lebanon War, the film moves through a series of interviews with fellow soldiers in Folman’s quest to remember his own experience, which in his words, is no longer “stored in his system.” As the director/narrator hears more stories from the war, he slowly begins to recall some of his own. The emotional crux of the film – as well as of the war itself – is the massacre at the Sabra and Shatila refugee camps, where over three days, Phalangist Christians slaughtered 2-3,000 women, children, and elderly Palestinians as the Israeli forces watched on.

In returning to events that happened over 20 years ago, Folman takes a difficult, but more elegant, approach in his film. It would have been easy for him to preach the horrors of war by overwhelming the audience with scenes of violence and gruesome death as so many films before have done (first 20 minutes of Saving Private Ryan, anyone?). But instead, he focuses on the role of memory above all. In essence, Folman’s forgetfulness represents Israel’s and the rest of the world’s collective amnesia of the events that took place in West Beirut in September 1982, as they are constantly overshadowed by newer and newer – and yet eerily familiar – horrors.

Visually, this animated film resembles a graphic novel in motion more than an anime film or more traditional animation, while its narrative style echoes Richard Linklater’s Waking Life rather than a more traditional documentary. The haunting score by composer and ambient artist Max Richter only intensifies the power of the film to explore the narrator’s and the world’s collective guilt over these tragic events.