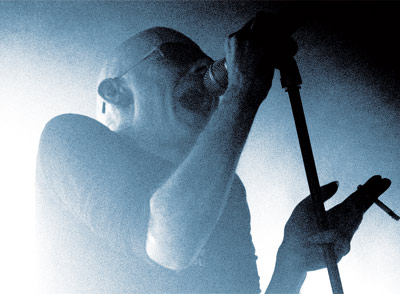 If a singer changes his name to Eldritch (an archaic English word for weird) you can hazard a guess that he’s not going to be floating in the Celine Dion orbit. And so it was with Andrew Eldritch. Mr. Eldritch (born Andrew William Harvey Taylor) was the overlord of the British Goth scene in the mid-eighties. His band, The Sisters of Mercy, has gained immortality in the gloomy Goth pantheon. But there was never any biting heads off bats for Mr. Eldritch. Absolutely not – the Goths were a far more sophisticated bunch. Eldritch himself studied French and German literature at Oxford, before taking up Chinese (I wonder what the Chinese word is for “eldritch”?).

Anyway, when this reviewer was offered a last minute chance to catch the band at their Krakow gig, I jumped at the opportunity. Because the truth is, when I was 13, the Sisters were my favourite group. (Although curiously enough, they haven’t released a single new song since then).

The day of the concert dawned and I was forced to realise that aged 31 I was now irretrievably square. Not only did I not have any cool clothes, but crucially, I didn’t have any black ones – the all important garb of Sisters fans. I frantically ransacked the wardrobe for a trace of something black. Nothing. “Well at least I’ve got some black socks,” I thought, somehow imagining that on seeing my black socks, all the other Goths would nod respectfully at my extraordinary street cred. But no – not a single black sock in sight. Instead, I was taunted by the multi-coloured Christmas socks that I had still not plucked up the courage to wear since being given them three months before. For a fleeting moment, I was back on track – my Tyniec Abbey t-shirt would save the day. OK, it was white, but it had a bloody great big black medieval cross on it, plus a decidedly eldritch-looking monk on the back. Victory. But alas, I then remembered the red napkin disaster. Tragically, I had forgotten to empty my pockets one day before putting on a wash and lo, an evil red paper napkin had crucified my eldritch T-shirt, turning it into a sort of blotchy Thai dye pink. That wouldn’t fool the Goth brigade.

But before I knew it, there I was in the cavernous Klub Studio (dressed in jolly smart navy blue) being comprehensively upstaged by my companion, who I suddenly realised had an unfair Goth advantage, as black is her favourite colour. I ordered some dirt cheap but decidedly effective beer, and abracadabra, Mr. Eldritch emerged from a puff of smoke (well, dry ice).

AD 2009 and would you believe it, the Sisters front man is bald. The jet black locks are gone, and sadly, like a Goth rock Samson, he seems robbed of much of his creative powers too. Well, maybe that’s too harsh a judgement. Yet two songs in, and the agitated crowd was shouting “Andrzej! Głośniej!” (Andrew! Louder!). Before long this had risen to a desperate chorus as devoted fans begged the technicians to turn the volume beyond car stereo levels. There was no change.

Still, I was so over the moon to be listening to these songs live that I couldn’t bring myself to get angry. When the band broke into the classic “Dominion,” the crowd erupted in spite of the meagre sound levels. As far as this scribbler is concerned, Mr. Eldritch is still one of the coolest cats on the British rock scene, with or without hair, or a good sound system. As always, he hovered above the crowd like a sort of aloof vampire count – there’s no friendly banter with him. As the singer once declared, “I speak many languages, but prefer not to speak at all.” But next time lads, play a bit louder please.