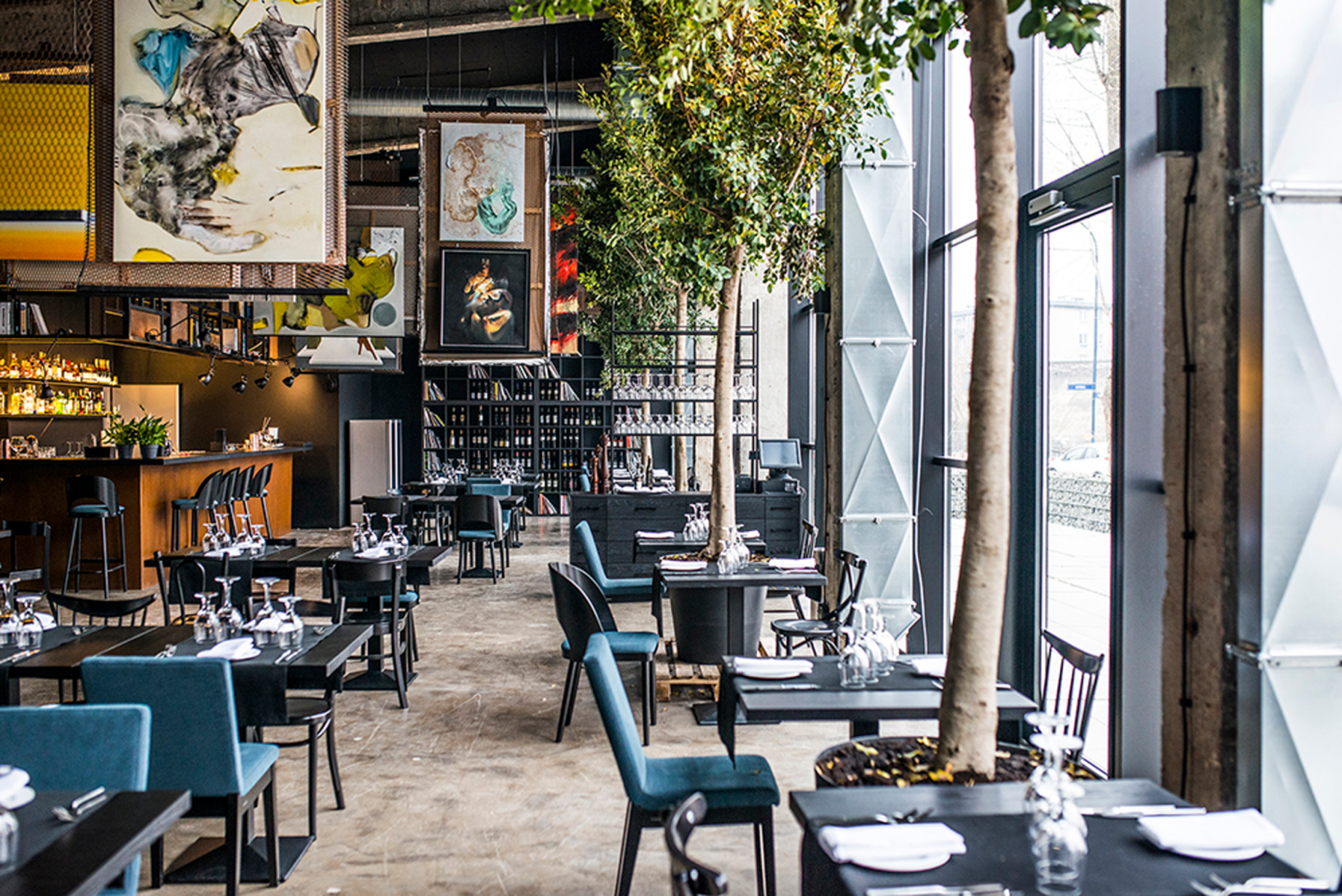 Industrial: a word which brings to mind factories, coal, steel, shipyards, hard graft. Honest working-classness. Zabłocie, an area which I’ve dropped into for this column on more than one occasion, and where this new addition to a burgeoning hip(ster) scene in this part of town is located, is, at best/worst, a light-industrial area, and one which is fast becoming gentrified, as expensive blocks go up seemingly every month, replacing or augmenting the slightly dowdy grey buildings that dominate the area. Since the Schindler factory had a makeover, this has been the most up-and-coming area of town, as countless start-ups testify. Art, often street-art, is the by-word here, as there seems to be lots of it around, perhaps as a result of the addition of the MOCAK gallery nearby. Sadly, Fabryka club—a good foodie venue in the summer—has had to make way for yet more flats.

Industrial, or to give it its full title, Industrial Resto & Bar, serving modern Polish/International haute-cuisine, seems to fit the vibe of this street, and area, snugly; the actual building housing the restaurant looks like an art gallery, from both inside and out, and in fact it is—in the sense that the breezy and colourful pieces of modern art that adorn the walls inside are for sale. The building has been fitted with the type of metal with faux-rust, like the one in Podgorze that houses the Kantor collection. How post-industrial. The sheer size of the interior is impressive: what it lacks in cosiness, it makes up for in space and style. Light and airy, an L-shaped room with plenty of tables; no immediate need to book in advance it seems. Ambient music drifting from speakers high above the tables, next to which some impressive shrubbery. An open kitchen, gleaming, metallic. Cooks working patiently. So far, so good. Could the food match the surrounds? We were quickly guided to our table by an attentive waitress and given the food and drinks lists.

There’s no two ways about it: it’s a high-end restaurant, and the prices reflect that. Skipping the wines (the list is long, and I wasn’t in the mood to choose—suffice to say they have most bases covered, old world and new), I got a beer (Czieszynskie), a white regional beer (10zł) which was more than acceptable. There were three other beers from the same brewery.

Soups come in between 21-32zł, and I ordered a spicy fish soup with prawns, sliced carrots and peas (32zł). There were several sizeable chunks of fish, and the soup was suitably spicy (I could have had it even more so), and, while I had no complaints per se, I prefer my seafood soups creamier. This was on the watery side. My partner’s beetroot soup with goat’s cheese and raspberry ice cream was certainly creamy, though a trifle sweet for my taste.

As courses in these high-end places tend to focus on quality instead of quantity, I treated myself to a starter (the menu is divided neatly into soups, starters, salads, and mains, and there are no more than five dishes of each). This was wild boar pierogi. My beef with pierogi in this country is that too often they’re boiled, bland, same-y. I avoid them. A hunch made me try them here. I’m glad I followed that hunch, because these ravioli-shaped cushions were some of the tastiest dumplings I’ve tried. Served with a tangy, salty red-wine sauce (I usually just use Maggi), the little pillows of delight were arguably worth the steep 32zł price tag. The meat inside was delicious, and just what I’ve been searching for all these years to make pierogi more interesting. Also, the lightly pan-fried method of cooking is how I’d choose to have them, given the choice. A great starter, and not too filling either.

Pausing to try another beer—this one more of a bock-style—the waitress helpfully agreed for me to   try a sample before ordering. I’d been eyeing the ribeye steak for my main, but in the end I plumped for shoulder of lamb, served with hummus, tabbouleh, and mint sauce (65zł)—Middle Eastern-style. I’m a great admirer of lamb, and, when done well, it’s amongst the finest and most succulent of meats, so it’s mystifying to me why, in central Europe, it’s so rarely-seen on restaurant tables. It seems to be making a comeback though, and is appearing with more frequency these days, particularly in places like this. I was not disappointed with the lamb at all—succulent, tasty, just the right amount of fat that makes lamb so tempting—and the accompaniments were all fine; I just felt that it lacked a few potatoes or carrots to make it a truly satisfying dish. It just felt a tad naked and under-accompanied. The tabbouleh, though, was fresh and minty, and the mint sauce an essential sidekick. Again, though, I’d question the price.

Dessert was a pear tart tatin (23zł). This dish comes in many forms, and I was hoping it would be the form where caramelised slices of pear floated on a sturdy pastry base, or perhaps a flaky puff pastry. This was neither; the base seemed almost to be an after-thought, and I hardly noticed it at all. That’s not to say this was bad though, as the slices of pear were done to perfection, and as it was served thoughtfully with a scoop of ginger ice cream, it went down very well indeed. It’s just that it could have been a bit better. An Irish coffee with a good dram of whiskey (15zł) assuaged my disappointment, though.stu

Overall then, Industrial gets my vote of approval. I’d be a bit reluctant to shell out these kinds of prices regularly—Krakow offers so many good-value and high-quality alternatives these days—but for a special occasion it’s ideal. The premises alone are enough to impress, if that’s the aim, and the location that bit out of the way to be interesting. While it’s not truly groundbreaking, it’s doing what it’s trying to do well, which should be enough to keep it afloat in this hip but grimy neighbourhood.