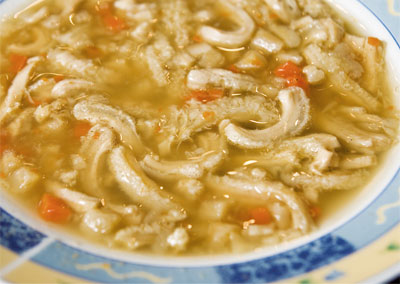 As a Pole born and raised abroad, I’ve always had my fair share of identity issues. But since living here for the last few of years, I have felt quite happy with my progress in understanding my estranged-homeland’s culture. However, as a person with a keen interest in gastronomy, my trouble accepting a few unusual yet essential Polish dishes has always been a thorn in my pride.

It’s true though, that Polish cuisine is generally a pretty tame affair. Meat, potatoes, soup and dumplings dominate the kitchen and flavours are usually subdued. The vast majority of our culinary heritage has been defined by the poor and when they were craving a bit of meat, pink and perky chicken breasts were not always on the menu. And so began Poland’s love affair with the wonderful world of offal.

In most Western countries, and particularly in North America, the subject of offal is fairly taboo. But in fact studies have continued to show that humans are not inherently averse to what they then grow up to deem “disgusting,” and this can be plainly seen in cultures that readily pop insects as a snack. These aversions are culturally learned. So think about it – what, logically, is so much more appealing about a eating an animal’s leg instead of eating its foot? If you’ve made the choice of taking an animal’s life in the name of your dinner so you can luxuriously chew on its ribs, it is simply insulting the beast and most of all completely wasteful, to reject its head, intestines, and any other edible part of its body.

But then again, unusual bits of animals are not the only part of Polish cuisine that are a little weird – preserving food and avoiding waste has created some practical solutions – such as zsiadłe mleko (soured milk). But all in all, this is the kind of food about which Poles like to comment thus: “Don’t try it! You’ll only like it if you’re really Polish.” And with this challenge in mind, I began my quest to understand a little more about the art of being Polish.

Some of you may cringe at the idea of eating congealed pig’s blood, but at every moment of everyday, I can guarantee you someone in Poland is eating kaszanka (blood sausage – similar to British black pudding). Blood and kasza (groats) are stuffed into a sausage casing (i.e. intestine) and are eaten raw, sliced onto a sandwich with mustard, or fried up with onions. The texture is reminiscent of rough ground beef mixed with rice. When fried, the meaty flavour is intensified, and the most prominent flavour, the heavy metallic after-taste, is minimized. It takes a while to get used to that aftertaste, as it can really overpower the initial flavour. If you thought kissing someone after eating too much garlic was bad, don’t try kissing them with blood-breath.

Tripe soup is also not strictly a Polish dish, but it is so popular it’s impossible to mention day-to-day Polish food without a word about this cow-stomach soup. The flavour of the actual flaki are greatly overpowered by the smell, which really takes quite a lot of getting used to. Thankfully the yellow slices of stomach taste just fine, as does the peppery broth (which is in fact delicious). If you’ve got a few chances to try this one out privately, I suggest training yourself to adjust to the smell in quick, regular sniffs. If you’ve got Poles watching, staring curiously in anticipation of your reaction, just hold your breath and chow down!

Left your fresh milk outside the fridge accidentally? Are things starting to separate and get a little funky? No worries! It’s time to make your own Polish sour milk. Just like yoghurt and cheese, sour milk is easy to make at home – all you have to do is forget to refrigerate for a couple of days.

Zsiadłe mleko, or sour milk, closely resembles dairy products we happily eat everyday such as yoghurt, sour cream, and particularly buttermilk, but it is also one of the least understood by foreigners. If you leave a glass of fresh, raw milk at room temperature it will begin to ferment, or “clabber,” separating the top layer of thick tangy cream from the watery bottom. This is very different from when your pasteurized or UHT milk goes off in the fridge. Its sterilization process killed all the friendly bacteria that makes zsiadłe mleko a stable and healthy drink even without refrigeration, while your fancy modern day milk has simply gone rancid. Try sour milk on boiled potatoes with dill (or baked potatoes with chives – though not a very Polish solution), or whizzed together with frozen fruit in a blender for a healthy home-made smoothie.

Ozorki (tongues) of cows or pigs are also popular, whether in aspic (natural gelatin) or not. Chicken hearts and stomachs are common additions to broths, and are later eaten quite enthusiastically. Another example, unrelated to animals for a change, is kisiel, a pudding-like hot fruit drink – though its consistency may be suspect to most foreigners. That is, perhaps with the exception of those familiar with Asian soy bean curd desserts.

Perhaps the strangest but most classically Polish weird food is czernina, a soup made of duck’s blood and broth. Unfortunately I never got a chance to taste the stuff simply because it is no longer on modern menus. Also, I’m not particularly interested in beheading a duck in my studio flat.

In the end, I realized that even after forcing myself to repeatedly taste these defining Polish dishes, I can’t relocate my childhood memories to Poland. Throughout my taste tests it became apparent that the experience would have been absolutely vital in appreciating most of this food. And despite my attempts at prejudice-free eating, I doubt there will ever be a time when I will happily cook and eat a pig’s tail soup. Then again, if it’s offered to me, I will make it a point to try my best.

Sure, 95 percent of Polish cuisine is actually quite safe-tasting meat and potato-type dishes. But if you can overcome your psychological barriers and accept that remaining five percent, you’ll feel hugely rewarded. You may not transform into a flesh and blood Pole, but you’ll certainly come close.

One thought on “From Offal to Off Milk”