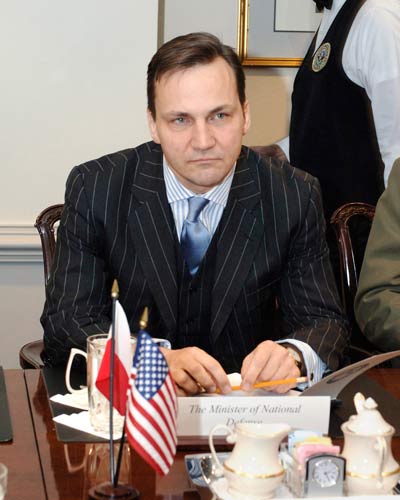 With the coming of its 60th anniversary, NATO selected a new secretary general. Despite the whole media buzz about the need for a new look for the Alliance, most of its members decided to go with the conservative selection of Danish Prime Minister Anders Fogh Rasmussen for the post. This ended speculation about the possibility of choosing someone from NATO’s Eastern European members – for instance Polish Foreign Minister Radosław Sikorski. For some pundits in Poland, this decision has clearly shown that allies from the former Eastern block are still unequally treated by the rest of NATO. On the other hand, others claim that Mr. Sikorski has just been too much of a personality to be considered for the job. Regardless of these speculations, the selection of Mr. Fogh Rasmussen speaks a lot about the direction NATO might be heading in. But it does not sweep aside questions about the future of Sikorski either.

In fairness to Mr. Sikorski, his experience and qualifications for the NATO appointment seem to be nothing short of excellent. As a former defence minister and current foreign minister of Poland he knows both military and diplomatic affairs exquisitely well. He also possesses extensive understanding of Afghanistan thanks to his posting there as a journalist during the 1980s. Considering the fact that this is the country where the future of NATO may be decided, this factor should not be overlooked. His insider knowledge of Washington D.C., with its policy-making process, think tank culture and bargaining tactics, might come in handy as well, especially if one wishes to rebuild those strained transatlantic ties. Sikorski not only worked in the U.S. capital, but his wife is acclaimed American journalist and historian Anne Applebaum.

Likewise, his record as head of the ministry of foreign affairs has been quite impressive. According to The Economist, since joining Donald Tusk’s government, Sikorski has shifted “from his hawkish anti-Kremlin past, [and] he has charmed both Russia and Germany.” And as the British journal noticed, he “has forged a strong alliance with Poland’s northern neighbour, Sweden, launching a joint plan for a new eastern partnership for the European Union.”

Unfortunately for Poland and Mr. Sikorski, there were also many reasons why his candidacy did not appear to be desirable for the main powers amongst the NATO members. Paradoxically, some of Sikorski’s advantages were seen by some member countries as obstacles that prevented him from getting the post. One of the biggest was his alleged anti-Russian attitude. This is why Germany was said to be very vocal about supporting Fogh Rasmussen rather than Poland’s foreign minister. Moscow specifically stated its objections to the Pole. In other words, NATO cannot allow itself to risk a conflict with Russia because of its anti-Kremlin secretary – this was a common explanation against Sikorski’s candidacy. These arguments were either seriously flawed or completely artificial. True, Mr. Sikorski has never been a fan of communism or the Soviet Union. Indeed, he has been a staunch critic of the Soviet empire, its system and ideology. And considering his own experience and Poland’s history, he was right to do so. But this does not mean that he was or is against closer diplomatic ties with the Russian Federation. Of course, it is not an easy task to achieve a rapprochement if Vladimir Putin claims that “the demise of the Soviet Union was the greatest geopolitical catastrophe of the century.”

Another supposed no-no that Mr. Sikorski committed was his close ties to some of the neoconservatives and other members of the George W. Bush administration. According to this argument, during his work for the neoconservative, D.C.-based think tank American Enterprise Institute, Sikorski favoured Republicans rather than Democrats, which is one of the reasons why the Obama administration did not support his candidacy.

But perhaps closer to a true explanation of who was and was not selected to be NATO’s next secretary general lies in the simple fact that most NATO members still consider Eastern Europe, with its relatively new members of the Alliance, as a region of political dwarfs. In terms of power and influence, Warsaw, Prague or Budapest are just too weak to be taken seriously by their friends from the West. However, if this is case, the decision is not necessarily in the best interests of the Alliance. NATO’s future does not rest solely on its military power, but also on the ability of its members to acknowledge its weaknesses and strengths. The common understanding that NATO needs to reform itself is a prerequisite to its further existence. Maybe having a secretary general from one of “the new kids on the block” would indicate that NATO is ready to reinvent itself, taking into consideration views from Eastern Europe.

Having said that, it would be a great misunderstanding to see the selection of Mr. Fogh Rasmussen as something irredeemably negative for NATO. Far from it. As to the current Polish minister of foreign affairs, the best is probably yet to come. Mr. Sikorski is relatively young for a politician with his skills and experience. With his no-nonsense, independent and non-partisan style – characteristics that are not very common among Polish politicians – he can run (successfully) for any office in this country. Abroad, with his international education and professional career, he has already made a name for himself. So let us not be surprised if the next NATO secretary general does indeed come from Poland.