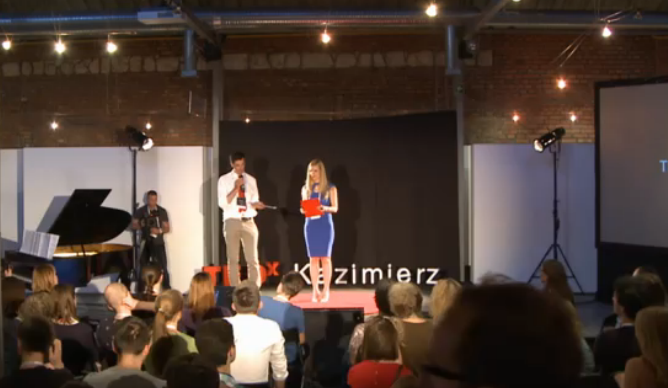 The second annual TEDxKazimierz was held yesterday at the Galicia Jewish Museum. A host of interesting speakers, performers, and musicians took the stage to explore the theme of “Transformation.”

The event was based on the enormously popular TED (Technology, Entertainment, Design) conference which takes place annually in Vancouver, Canada. Anyone can become licensed to host their own independent TEDx event provided they agree to follow certain guidelines, such as broadcasting a few talks from the main show. Kazimierz’s – one of two in Krakow – is chiefly organized by local entrepreneur Richard Lucas and a team of other dedicated volunteers.

It opened with another local entrepreneur, John Lynch of Lynka, who discussed the travails of his early business days and how they led him to his current motto of “Keep the Faith,” which he sported on a shirt crafted by his now-successful brand. He was followed by another good example of “ideas worth spreading”: Chris Conder, who worked to connect rural England to lightning-fast broadband in its rainiest year.

It wasn’t all strictly business. Comedian Tomasz Biskup analyzed the nature of jokes, and magicians Michał Kulik and Michał Skubida used illusion as metaphor for positive risk-taking. Thoughtful musical entertainment was provided by the all-female sax quartet Saksofonarium as well as the Jewish Community Centre Choir. There were a lot of artists speaking as well, from Paulina Fiejdasz, who channeled a curiosity driven by her Polish grandparents’ stories into film to combat prejudice, to Kosha Dillz, a Jewish freestyle rapper who flew all the way from New York to rhyme about his transformation from a life of drugs and crime to one of, well… Jewish freestyle rapping.

Didn’t get a chance to see it? All this and more is online at their website.