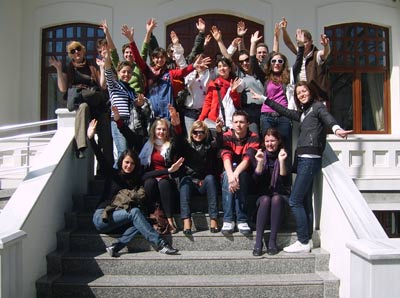 Mixing with different cultures may be par for the course when you live in a multi-cultural city such as London or Paris, but in Krakow, apart from the odd “Chinese” restaurant, ethnic diversity does not really exist. But one project in the city is helping Krakow’s youth meet up with other young people from around the world to challenge ideas and assumptions about each other and their cultures and communities. And last month, a group set off from Krakow to Bursa in Turkey to meet other youngsters from Europe’s only predominantly Islamic state, in order to do exactly that.

The event, called Project Mosaic, was organised as part of the EU’s Youth in Action programme. Adam Tadeus has worked as the international trainer of the Polish group for the last five years and has guided youngsters from 13 to 30 around Azerbaijan, South Korea and China, via the Trans-Siberian Express, and he headed up the Polish team to Turkey. He said: “The aims of the programmes are to build tolerance and solidarity between young people. To do that we have to remove young people’s prejudices about each other. In a country like Poland, where some people sometimes might have negative attitudes towards some countries, that’s quite a challenge.”

Adam works closely with groups at Krakow’s YMCA, which organises a lot of international events, and many of the young people who join an overseas exchange programme have already taken part in a class at the centre. “The trips aim to drag people out of their comfort zone and to really make them look long and hard at their lives compared to what other people have – or rather don’t have. One of the activities we’ve used in the past is to divide the youngsters into two groups – refugees and officers guarding them – and set them tasks that mirrored what actual refugees might go through. It really gave them a wake up call to what people who flee persecution in their homeland actually face.”

Students Karolina Czamara and Cezary Wiśniewski took part in last month’s Turkish trip. “Visiting a country where Islam is the dominant religion was a great opportunity and experience,” said Karolina. Cezary said: “I had some expectations about Turkish girls – that they would be more conservative – although I was surprised that they were more like Europeans. One of the strangest things was to see dancing in the mosques and hearing traditional chanting five times a day.”

In a country such as Poland, where the ethnic white population hovers around 98 percent, the journeys that Adam organises give youngsters the chance to meet people from cultures they might otherwise never encounter. Adam said: “Travelling through Russia on the Trans-Siberian Express we stopped off several times and met Roma groups living close to Lake Baikal in Siberia to talk about and see some of the alcohol and drug problems facing them.”

The default language of the group in Turkey was English, but as all the youngsters came from non-English speaking countries, many of the activities looked at ways to build non-verbal communication. arolina said: “One task that we had was to tell a story but only using mime, which ends up being quite funny, but the point is to prove that not knowing each other’s language shouldn’t be a barrier to communication. The project is called ‘Mosaic’ because although we all spoke a different language, a mosaic is made up of many different elements – as we are.” Evening get-togethers, at which students from each country gave a presentation, also helped to shine a light on each other’s cultures. “Our evening looked at the delights of Pierogi, Poland’s obsession with football, vodka and wianki – the tradition of girls wearing flowers in their hair in June,” added Carolina.

One of the legacies of the trips is that some students have decided to return to countries that they visited in order to complete their university studies or to get involved in volunteering projects. In the long term this helps to build Poland’s reputation as a country that helps and supports others.