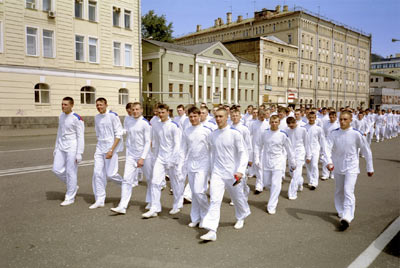 The big pink posters made it hard to miss Krakow’s sixth Culture for Tolerance Festival, which took place April 16-19. Same-sex pairs of iconic Greek sculptures had been Photoshopped into compromising positions, then placed into bright yellow hearts. Queer culture had hit town, and it was here to party to this year’s theme: “Art for Pleasure.”

Since 2003, the festival has been the annual centrepiece of Krakow’s Culture for Tolerance Foundation, which seeks not only to increase tolerance of LGBTQ people but also to promote “all [their] artistic and intellectual endeavours,” according to their website. However, 2009 marked the first year that the artistic and human rights components of the festival were separated. Those looking forward to the traditional March for Tolerance will have to wait until “Queerowy Maj” (“Queer May”), a separate festival set for May 15-17, and organised by Kraków’s branch of the Campaign Against Homophobia, founded in Warsaw in 2001 and now the biggest NGO of its kind in Poland.

Why the split? “Growth,” according to Samuel Nowak, project manager of the festival and president of the foundation’s board. “For the past two years, the artistic content of the festival has risen,” he said over the buzzing, brightly coloured crowd at the festival’s opening last month. “This is for more ‘advanced’ participants. They don’t have to be explained what is queer – they’re here for the top gay art.”

“Top gay art” indeed. The opening, at Galeria Pauza, saw the unveiling of Russian-born Slava Mogutin’s photographic series “Lost Boys,” which Nowak called a “dream project” for the festival. Mogutin gained political asylum in the United States in 1995 after suffering persecution in his home country for his queer art and writing, but “Lost Boys,” his first show in Poland and in Europe outside of Russia, transcended his story. “It’s such a cliché to portray Russia as a totally grim and f’ed-up place, so I really wanted to show a different side of my country,” he wrote in his artist’s statement on display. “One that is colourful, exciting, sexy, and full of raw, crazy energy.”

His words could stand for this year’s festival as a whole – the tight focus on art made for what Nowak described as a unique, “positive affirmation” of Polish, but also international, queer culture. Other events included Polish artist Laura Pawela’s opening of “Terrorismo Lesbico,” a series of photographs she took in Argentina especially for the festival, and seven “Queer Cafes,” or informal discussions with art historians like Richard Dyer of King’s College, London. Film took centre stage at the festival this year, ranging from a “Queering Wajda” series to the American lesbian cult classic “But I’m a Cheerleader!” Trans issues were also explored at a free screening of Agnieszka Holland’s A Girl Like Me: The Gwen Araujo Story, about a teenage hate crime victim in California.

Another important component of the festival was purely social, and anchored by nightly parties and concerts all over the city. The majority of the festival’s events were free and, like the foundation’s publicity and press materials, translated into English. By all indications, “Art for Pleasure” was a hit – the foundation stated that 3,000 people attended the four days’ events. “It’s changing the city for a few days,” Nowak said. “You really feel you’re in a European city.” As for the crowds, they proved that “there is a space for this.”

However “advanced” the festival’s clientele, the meaning of the word “queer” was still a topic of debate at its events. Travis Jeppesen, an American artist, poet, and critic based in Berlin and Prague, offered a definition at his talk “Queer Art in Central Europe”: “‘Queer’ is about the rejection of a code – any code.” While this is not an easy task in Poland, perhaps this year’s festival signals that “top gay art” is a way in for the Tolerance Movement. As of April 21st, there was no known counter-festival activity – a first.

This month, “Queerowy Maj” takes place May 15-17, and the March for Tolerance will start at Plac Wolnica on Saturday the 16th. Other planned events include “debates, movies, workshops, and nightly parties,” according to Sowa from the Campaign Against Homophobia. “We will do our best to provide translation for English speakers at each of them.” When asked about the prospect of violence and/or protest, Sowa assured that the Campaign “always strives to provide maximum safety.”