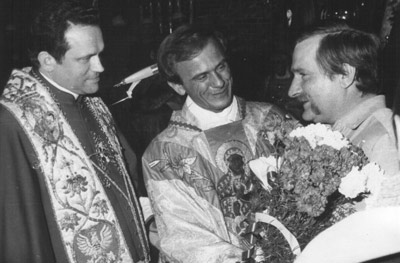 One of Krakow’s most hallowed institutions has come under fire due to a biography of Solidarity hero Lech Wałesa. The Jagiellonian University was challenged by the government over Lech Wałęsa: Idea and Reality, an exhaustive work that was originally the masters dissertation of 25-year-old historian Paweł Zyzak.

Although the 620 page book deals mainly with Wałęsa’s political odyssey, revelations about the former president’s youth were seized upon by journalists. The most explosive allegation is that Wałesa fathered a son out of wedlock, and that the child later died in tragic circumstances. Later in the book, Mr. Zyzak revisits the familiar theory that Wałesa had been an informer for the communists during the seventies.

Wałęsa lambasted the claims as “outrageous, disgusting and barbarous slanders,” adding that he was considering leaving the country if such attacks on his dignity did not cease. “I’m not joking,” he added.

Minister of Science and Higher Education Barbara Kudrycka threatened to send a state validation commission to investigate the university’s history department in order to judge whether Mr. Zyzak’s masters degree has been justly awarded. The issue polarised the press, with many coming to the defence of the national hero, whilst others called for a dispassionate approach.

A subsequent wave of interviews with Mr. Wałęsa’s childhood peers suggested that the illegitimacy story should not be dismissed outright. Regional news station Gazeta Pomorska filmed a number of inhabitants of the village of Popowo, birthplace of the former president. Mr. Wałęsa’s erstwhile neighbours spoke with calmness about the affair. Their conclusion was that Wałęsa had run away to Gdańsk after he discovered that his girlfriend was expecting a baby. Four years later, the child, named Grzegorz, drowned while playing in the river. According to villagers, Wałesa came to the funeral, but the mother was so overwrought that she pushed him away when he attempted to speak to her.

In early April, after protests in the press about Minister Kudrycka’s threats to the university, the government retreated on its plan to vet UJ’s history department. Meanwhile, public opinion has remained largely balanced about Wałesa. His alleged collaboration with the SB (Communist Secret Police) has already been aired in a major study by IPN (The Institute of National Remembrance). That initial book, Lech Wałęsa and the State Security Services, caused a scandal when it was released in 2008. However, a poll revealed that a majority of Poles felt that even if Wałęsa had served briefly as a collaborator in the seventies, his later achievements as the leader of Solidarity outweighed his mistakes.

Professor Andrzej Nowak, who supervised Mr. Zyzak’s dissertation, published a cool-headed defence in response to the recent scandal. Writing in the Rzeczpospolita newspaper, he lamented the fact that in a largely political biography that stretched to some 624 pages, all the focus had been on “a 3.5 page fragment” relating to the tragedy of an extra-marital child. He stressed that the book raised important historical questions about Wałesa as a political entity:

“It seems to me that the aim here is not ‘to disparage Wałęsa,’ but something else entirely. The aim is to explain the phenomenon of the great, unique role that Wałęsa played in history…. Would communism have fallen without him? Would Solidarity have won without him? And did it win with him? And what, for some, does victory mean? That discussion is not resolved quickly. It seems to me that Paweł Zyzak’s book is an important voice in this debate, and one that deserves to be listened to.”

Whilst Professor Nowak did not dwell on the matter, other academics were concerned about the government’s knee-jerk reaction to the revelations. As it emerged, many of the critics had not even read the book, as one professor reflected:

“The book caused a fierce attack from government circles and their supporters – not only on the young author and the supervisor of his dissertation, but also in a renewed campaign against the Institute of National Remembrance, which employed Mr. Zyzak as an archivist after he successfully defended his thesis. Moreover, the fact that a prominent politician and former member of the anti-communist opposition found even the publication of Zyzak’s book (by a private Cracovian publisher) to be an outrage is shocking. This shows that 20 years after 1989 (and 25 years after 1984), the one-time freedom fighters now ruling Poland are veritably brainwashed in the Orwellian manner. Their first impulses are to threaten special controls taming publishing and to close archives – these are attempts to limit the freedom of speech and academic research, which are the cornerstones of all civil liberties”.

Meanwhile, the debate over Mr. Wałęsa’s political achievements is unlikely to subside. One supporter, MP Arkadiusz Rybicki, declared that dry historians were simply no match for the task of Wałęsa’s biography. He suggested that Shakespeare would be more appropriate. For here was a man – who in 1980 was an unemployed electrician and might easily have become a drunkard – who went on to lead the nation. Poland’s most respected film-maker, Andrzej Wajda, has also lent his support to Wałęsa. In March, the director announced that he will make a film about the freedom fighter’s role in Solidarity.