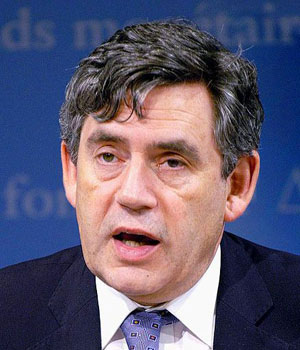 Gordon Brown made his first visit to Poland as British Prime Minister on Tuesday (28th April). On his busy agenda were discussions with both Polish leaders, President Lech Kaczyński and Prime Minister Donald Tusk, as well as an emotional tour of the Auschwitz Nazi death camp. Political discussions centred around three key areas – Afghanistan, climate change and the economic situation.

After a breakfast meeting, Brown said he was pleased that Poland had agreed to deploy an extra 400 troops to Afghanistan, ahead of the upcoming elections there. “I said that Britain will do more in Afghanistan and welcomed Poland’s decision to send an additional 400 troops to Afghanistan, providing vital reinforcements to protect Afghan democracy through the elections,” he said. The increase will take the total number of Polish troops assigned to the NATO-led International Security Assistance Force (ISAF) to 2,000 – the sixth largest.

At a joint press conference in Warsaw, Tusk reinforced Poland’s support to the ISAF, by stating: “We took a decision to expand the contingent which for Poland isn’t easy for organisational, financial and political reasons. We believe, however, that the situation in Afghanistan before the presidential election demands increased efforts by all those participating in this NATO mission.”

Both leaders also confirmed that they had discussed the climate change summit which is due to take place in Copenhagen in December. “We have discussed the agenda for upcoming months and how much Poland and Britain may jointly do to better prepare Copenhagen as well as ways of financing climate protection,” Tusk confirmed.

The subject of the two countries’ handling of the economic crisis gave Gordon Brown some unwanted attention to his handling of the UK’s economy. Mr. Tusk left the British Prime Minister red-faced when subtly he said, “It’s not for me to comment but the Polish government, at a time of financial crisis, behaved with full responsibility in terms of public funds and the budget deficit.

“After a few months, you could see that our economic financial policy has been accepted and understood, both at home and abroad.

“The method that we have taken in respect to the crisis is not to multiply expenditure but to be responsible with public funds.” Mr. Tusk added: “I would also like to stress that effective supervision of banks and sticking to the rules, not exaggerating with living on credit, these are the most certain ways to avoid most consequences of the financial crisis.”

Although he never specifically referred to the UK, there was no doubt in anyone’s mind that his comments were in reference to the 700 billion pound budget deficit that British Chancellor, Alistair Darling, a week earlier announced.

Back in the UK, the Polish Prime Minister’s comments gave fresh ammunition to Mr. Brown’s Conservative opposition, with shadow Chancellor George Osborne saying: “Today we have the prime minister getting a lecture in prudence while he is in Warsaw. We are used to Polish builders telling us to fix the roof when the sun is shining but not the Polish prime minister as well.” Time will tell whether Mr. Osborne’s comments will come back to haunt him with hundreds of thousands of Poles still living in the UK, who may not take to kindly to his analogy.

Although Poland’s politicians have often been ridiculed in the past, it seems that on this occasion Mr. Tusk has a point. Poland’s economy expanded by 4.8 percent last year and is celebrating 12 consecutive years of economic growth, while the UK is predicted a 3.5 percent drop in GDP this year, and a budget deficit of 12 percent of GDP.

After his meeting in Warsaw, Gordon Brown visited the Auschwitz and Birkenau Nazi death camps in Oswiecim with his wife, Sarah. The couple paid their respects to the more than 1.3 million people who lost their lives in the camps. Both Mr. Brown and his wife were visibly moved by what their “harrowing” private tour of the sites, which included the infamous railway tracks, watch tours, gas chambers and “death wall,” where they lit a candle in memory of those who were shot there.

After exiting one of the former gas chambers, the British Prime Minister wrote his own message of condolence in the visitors’ book which read: “What I have seen this afternoon is a harrowing testament to the murder of so many who suffered here the extremes of terror.

“What happened here is a shared human story, a perpetual reminder of all the darkness of which the world is capable but also a story about what the world can endure and survive.

“In this place of desolation, I reaffirm my belief that we all have a duty, each and every one of us, not to stand by but to stand up against discrimination and prejudice.

“As we remember the worst of our past we must each commit ourselves to serve the best of our future.”

After the visit Mr. Brown said: “Nothing, no film, no book, no documentary can prepare you for what you see here.

“But it makes you absolutely determined to not ever allow this to happen again. We will bring children from our schools to show them the horrors of what happens here, so that people will be persuaded that persecution and discrimination are completely wrong.”

In response to Donald Tusk’s recent request to EU leaders to support a 100 million pound fund to help maintain the site and museum, Gordon Brown confirmed that the UK would not shy away from its responsibility to assist, although he did not specify any exact financial figures that would be. He added, “We are determined that events such as we have witnessed in the last century should never happen again.

“We are determined to educate a generation of young people to the evils that can be done, evil that can be prevented.”