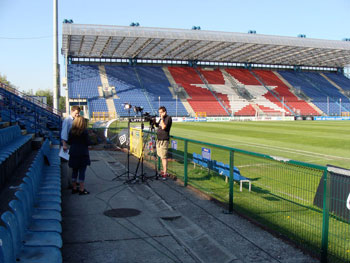 UEFA President Michel Platini appears much more confident about the ongoing preparations for the Euro 2012 tournament made by host countries Poland and Ukraine, and it now appears Krakow may have a shot at hosting some matches.

Platini led a European Football Association (UEFA) delegation that visited Warsaw on April 15th for an update on Poland’s preparations. He then moved on to inspect efforts being made in Ukraine.

Polish Prime Minister Donald Tusk was amongst those who had a formal meeting with the UEFA chairman. Tusk assured Platini that the Poles are now “on schedule.” Platini’s public reply also suggested that the state of preparations in Poland has improved drastically since UEFA expressed their sincere concerns in the summer of 2008.

In December of last year, Platini again paid a visit to both countries, at which time he was clearly more impressed by the progress made in Poland than in Ukraine. At the time, UEFA General Secretary David Taylor said, however, that “there’s still a lot of stadium construction to be done” when he stood next to the muddy pit that is going to become the new stadium in Warsaw.

But during the last visit in April, Platini actually sounded genuinely excited: “You’re going to have some beautiful stadiums here in Poland. Fabulous stadiums! They are going to be fantastic for the future of Polish football,” he announced.

Given the fact that Krakow can only be criticised for not having started the building of some underground parking lots, the city has a perfect report sheet and it seems more and more likely that Krakow will be promoted from reserve city to an actual match venue. As a result national and local media have been speculating more and more about whether it is a mere formality until Krakow gets the go-ahead. The official match sites are expected to be announce May 13th.