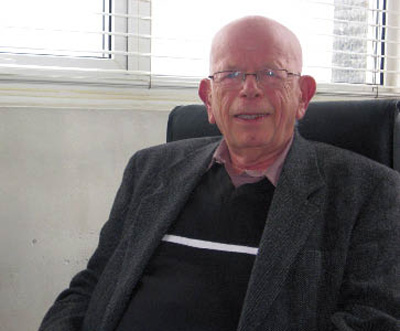 Strolling into the lobby of London’s Polish Cultural Centre, I pass a wall filled with posters, haunted with the faces of those who went missing in search of their “British Dream.” Were they victims of the migrant wave; those who drowned, unable to cope with an alien ocean, or were they claimed by the growing tide of resentment faced by Poles on these shores?

I find the offices of the Federation of Poles in Great Britain on the second floor, and wait patiently for the President – Dr. Jan Mokrzycki – to finish with his first interview. I sit in the small office of his secretary as she answers calls and helps visitors to decipher basic application forms. I ask Kasia if her day is usually like this. “Oh no ? today is a quiet day. The phone usually never stops,” she says as, on cue, the phone begins to ring.

I hear a commotion in the corridor, and looking up, I see the beaming, pleasantly-wizened face of Dr. Mokrzycki, and reach out to shake his hand. “No, no,” he smiles, “Not in the door frame ? it’s bad luck!” I apologise sheepishly, and make my way into his office, sitting on the other side of his desk, which is littered with paperwork.

“The Federation was founded in 1946,” he says, in response to my first question, “at the moment the British government withdrew their recognition of the Polish government-in-exile and recognised the leaders of the People’s Republic of Poland as the true government of Poland.” He slowly sits back in his chair, probably preparing to repeat the same spiel as heard by my predecessor.

He continues: “When the government-in-exile ceased to exist we became the main representative body for Poles living in Great Britain. Our aim is to promote and spread Polish culture, education, and to fight for the good name of Poland.” We both smile, and I ask him the typical problems faced by Poles on arrival in Britain. At this he straightens up, his eyes piercing mine as he speaks.

“Firstly, ignorance, ignorance, ignorance ? of the conditions, the culture and British law. Unfortunately, there is no cure for human gullibility,” he says grudgingly. “People are naïve and can be easily led. The situation has improved, but we still have dishonest employment agencies [in Poland] that take people’s money promising a kind of ‘El Dorado.’

“These people arrive and it turns out that more money has been taken from them to live in horrible conditions, and the work that was promised is non-existent. Often they still have enough money to return to Poland, but ?” Mokrzycki pauses, perhaps thinking of a better way to put it, “one must take into account ? particularly in the case of men who come here alone ? pride. Nobody likes to admit when they’ve been cheated.”

I wonder whether they were the same men sleeping rough at Victoria coach station, shop entrances and benches in London’s West End. Proud men unable to face their families, but whose wives, children and parents wanted nothing more than their safe return.

Stubbornness has long been known as a Polish characteristic, present during proud moments in Poland’s history: the Battle of Monte Cassino, the skies of blitzkrieged Great Britain, and during the fateful Warsaw Uprising -and in this case, it appears to have been the downfall of some.

I briefly think back to the posters in the lobby, and consider whether they were simply people unwilling to be found, but am jolted from my daydream by Mokrzycki, who continues:

“Many take work which is not legal, where the employer pays less than the minimum wage, and exploits the worker left and right. So they stagnate. They live with three people in a room meant for one, and eat poorly. Some, over time, begin to acquaint themselves with the English language, but they waste the first year of their residence because they were hired illegally.

I press Mokrzycki on what was being done to combat the unscrupulous employment agencies and asked whether there was some sort of partnership between Poland and the UK designated to wipe out such organisations.

“There is a collaboration with British police, but it’s not as good as it could be,” he admits. “A representative of the Polish police works in the Polish embassy, and there are about four members of the British police who deal specifically with Polish immigrants. It’s slowly starting to take on some kind of shape, but it won’t always be effective. We don’t even know how many British people – never mind Polish – are missing in the UK.”

“But,” he says, as his forefinger prods in my direction, “I think that the media are to blame. They portrayed the UK to be a promised land ? a country where you could pick up £50 off the pavement.”

Depending on who one believes, there are between 400,000 and one million Poles currently in the UK, and much has been discussed both here and in Poland on the the implications of a skilled-worker “brain drain” on Poland’s economy. But with the UK gripped in economic meltdown, I was curious if many would go back. Was Mokrzycki optimistic? He laughs.

“If I was not optimistic I would certainly not be President of the Federation,” he says, smiling. “I hope that a lot of them will return to Poland. With their additional experience and a good knowledge of English it will be a huge plus for Poland. There is no need to look at migration as something negative ? as long as it’s not permanent.”

“A great example,” Mokrzycki says, “is our Minister of Foreign Affairs [Radosław Sikorski], who was an immigrant to the UK. He completed his studiees, gained valuable experience, and returned. Now he represents Poland on the international stage.”

I ask about Dr. Mokrzycki’s most recent public statements in the British press, more specifically; the Giles Coren furore (when, like many, I was outraged by the food critic’s generalisations about Poles), and shock-jock Chris Moyles’ rant on the radio (tasteless, but unsurprising to those of us who wake up to his ramblings every morning). But hadn’t Coren simply exercised his right to free speech? Mokrzycki sighs, pausing in contemplation before answering carefully:

“I think there is a difference between freedom of expression and simply offending people,” he says. “I’m absolutely for the freedom of speech, but that freedom must have boundaries. In the case of Moyles, it was an ugly outburst, which he apologized for immediately after the protest.”

“As for Coren…” he begins, like a headmaster discussing a disobedient pupil, “we haven’t heard an apology yet, but that does not mean that the matter is finished.”

He continues: “If Coren insulted one Pole, he could be taken to court immediately. But unfortunately, in British law there is no judicial recourse if one offends an entire nation,” he says. I nod, but more from relief than agreement.

“We simply want to find out who is responsible for the regulation of journalists who abuse the right of free speech, and who promote a view that is obviously incorrect. Because, it’s not true that Poles amused themselves during Easter by sending Jews into a synagogue, which they later set on fire,” he says, referring to Coren’s diatribe.

When he mentions the regulation of journalists, I ask, is he referring to the Daily Mail? He chuckles.

“The Daily Mail is a newspaper of the right-wing, and to sell their newspapers they must write about what they believe in,” he says. “But, if they lead a long-term campaign which can be considered as anti-Polish, you have to somehow curb those views ? which luckily we managed to.”

“They used Poles as a symbol for their struggle against the EU. Yes, they have the right to oppose the European Union, but they should not single out Poles. So we came to an understanding, just like with the BBC, who agreed to stop talking about ‘Polish’ concentration camps during WW2.”

Mokrzycki is understandably pleased with the concession made by the BBC. Like many of his generation, he and his family suffered terribly at the hands of the Nazis; his mother was sent to Auschwitz, and his father, uncle and grandfather were all executed by the Gestapo.

Mokrzycki stayed in Warsaw with his grandmother and, once liberated by the Russians, he broadcast a plea over the radio, unaware that most of his family had perished. Thankfully, his mother ? freed in Ravensbruck by the Americans – heard the transmission and went to Warsaw to collect her son. In 1946, aged 14, Mokrzycki came to Britain.

I am curious how much change he has witnessed in England since then. He takes a deep breath as he harks back to days of yore.

“I remember my first few years in Great Britain when nobody locked their front door or their cars,” he continues. “Today that’s not possible. Of course, this is not only in Great Britain, but a change that has occurred in global society as a whole, and it’s definitely not for the better.”

He adds: “However, it also seems that Britain is more open and liberal ? a place where skin colour and origin does not play the role it once did.”

“It’s also changed a lot in terms of Britain’s attitude towards Poles,” Mokrzycki states. “When we [the post-WW2 migrants] came to the UK, many national associations were against us. Today, trade unions extend us their hands. To a large extent, this is because they need more members, not because of any special love for the Poles – but the fact is we can actually work with them, as our interests move in the same direction.”

Does he long for the country of his birth?

“Yes, and no,” he says bluntly. “My biggest pleasure is going whenever I can, and I would definitely miss Poland more if I had close family there ? unfortunately, I don’t. The Germans ensured that.”

“But, I miss the nature of the Polish people ? especially the beautiful women,” he adds. “I miss the fact that everywhere I hear the beautiful language, although, nowadays I hear it often on the streets of London.”

“However, the United Kingdom is my home. I love this country,” he declares. “I’ve lived here over 60 years, and here I have my university friends, my neighbours, my golf club, and the people that I go to football matches with. I have my grandchildren, and a granddaughter who will represent Great Britain in gymnastics during the 2012 Olympics.”

“But,” Mokrzycki concludes, perhaps with a hint of that Polish stubbornness, “I will always feel like a Pole.”