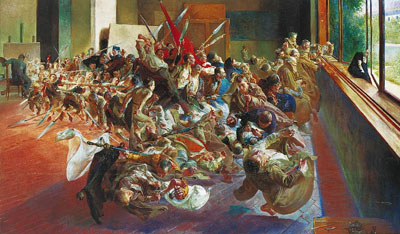 The promise of an 80th anniversary show at the Princes Czartoryski Museum – Poland’s oldest public collection – would have been a comforting thought to Jacek Malczewski. Born in 1854, he was very much the patriot, even though he lived to see just a decade of Polish independence before breathing his last in 1929. This month’s exhibition may hint at continuity, but it’s been a rocky road since then.

Malczewski’s son Rafał – also an acclaimed painter – managed to escape Poland at the outbreak of war in 1939. Meanwhile, Prince Augustyn Czartoryski was arrested by the Gestapo and his property seized. The prince and his wife were eventually deported to Madrid, thanks to the intervention of the Spanish Royal Family, but they would never return. The Nazis then set about cherry-picking the Czartoryski collection, with Governor Hans Frank spiriting away a Leonardo and a Raphael (the latter is still missing). “You’re going to be the Queen of Poland,” Frank is said to have told his wife on hearing the news of his grand new job. Further drama came in the 1950s when parts of the collection were again dispersed, this time by the communist authorities. Finally, with the collapse of the Iron Curtain, Prince Augustyn’s son Adam won a court case to reclaim the museum. He donated it to the nation under the aegis of the Czartoryski Foundation, which continues to oversee the collections, together with the National Museum, until today.

Malczewski was a protégé of Jan Matejko (1838-1893), a tiny man who exerted a titanic influence on Polish art. Matejko was the mentor of a generation of outstanding Polish artists, all born at a time when Poland did not actually exist as such. For him, art was a deadly serious matter. He saw the artist as the conscience of the nation, and urged his pupils to strive towards these lofty goals.

Malczewski often rebelled against his mentor, but his commitment to the national cause never wavered. “Paint so that Poland will rise from the dead,” he urged his own pupils. On numerous occasions, Malczewski was offered the opportunity to travel abroad, but he preferred to stay in the Polish orbit, once amazing his companions by withdrawing from a trip when it had already begun. When asked why he was so keen to get away, he replied that a flock of geese in a simple Polish meadow was more interesting to him. One assumes that his companions didn’t invite him again.

To the foreign eye, Malczewski’s landscapes appear wilfully fantastical. There’s an ethereal, uncanny air that seems decidedly mannered. But curiously enough, such landscapes were not figments of his imagination. And even in today’s Poland, where the countryside has been so tragically disfigured since 1945, there are plenty of places where the traveller can encounter this peculiar aura. Wandering the foothills of the Carpathians and elsewhere – especially in spring – one often senses spirits of the kind that Malczewski made visible in his canvases. So perhaps one should say that he was not a fantasist, but rather a sort of idiosyncratic naturalist. Non-believers should get their walking boots on and head for the countryside.

Perhaps the masterpiece in this month’s tremendous tribute is Melancholia, a striking canvas that stretches some 2 and a half metres wide. It was painted in 1894. On the back, the artist wrote a simple pointer: “Prologue. A Vision. The last century in Poland. Tout un siècle.”

The setting is a painter’s murky studio. In the far left corner, a faceless artist is slumped in front of his work. Yet out of his canvas a horde of phantoms comes hurtling into the room – the roar of battle erupts. Sabres clatter and scythes glint. Meanwhile, beyond the studio is an idyllic garden. Yet although the window is ajar, the desperate phantoms seem trapped. They are moving in a kind of vicious circle. One character clasps the window ledge and gazes out as if the garden was a promised land.

Some of Malczewski’s peers jokingly dubbed him “Symbolewski,” as he was forever inserting symbols into his landscapes. And indeed, Melancholia offers us plenty to chew over. The flailing figures are those that fought in the three uprisings against the Russian occupiers; first in 1794, in defense of Polish sovereignty, second in 1830, in an attempt at regaining that sovereignty, and again in 1863, the final doomed bid for freedom. All these uprisings were accompanied by mass confiscations of property, and in the latter two, deportations to Siberia. Malczewski paints several of the condemned men in chains – it was standard practice for conspirators to have to walk the entire journey to Siberia in manacles.

Is the dreamy garden supposed to represent the longed for state of independence? Quite possibly. The only figure in it is a child, suggesting that only future generations might be able to attain sovereignty. The fact that the child is dressed in black might hint that Malczewski was not overly optimistic about such a change of fortune actually occurring. Few Poles were in 1894. Or is the cloaked child simply an image of Death, and the garden a celestial one?

Such overtly patriotic paintings as this wouldn’t have survived long in Russia. Malczewski was able to wrestle with such themes as he lived in the Austrian zone of partitioned Poland. The Habsburgs granted the Poles more freedom than was allowed in Russia or Prussia, and with this liberty, Malczewski emerged as one of the stars in an exceptional generation of Polish artists. Today, his popularity remains undimmed. Indeed, the words of one of his poems – certainly not the most modest ever written – have proved prescient:

“Whispers of Art: Jacek Malczewski 1854-1929” runs from March 26th until May 24th at the Arsenal of the Czartoryski Museum, ul. Pijarska 8. A catalogue has been published by the National Museum, ed. Barbara Leszczynska-Cyganik. Further background in English can be found in Jan Cavanaugh’s Out Looking in: Early Modern Polish Art, 1890-1918. With special thanks to curator Urszula Kozakowska-Zaucha.