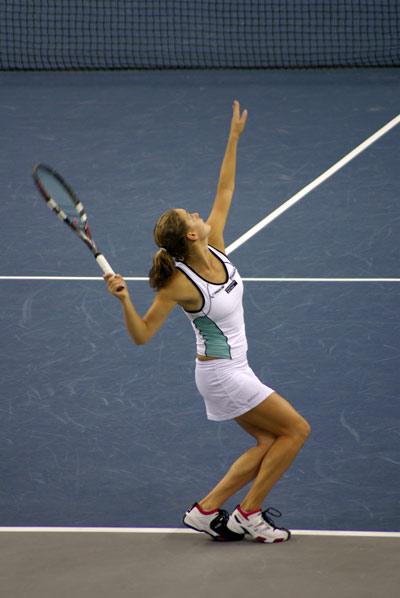 Agnieszka Radwańska’s substandard 2009 season continued after a quarter-final defeat to Russian teenager Anastasia Pavlyuchenkova at the BNP Paribas Open in Indian Wells. The Pole will now lose her world number 10 ranking to Belarusian Victoria Azarenka, who managed a semi-final berth at the prestigious WTA event.

Pavlyuchenkova had not dropped a set coming into the match, and her impressive run included a second round upset of number two seed Jelena Jankovic, and she showed no signs of letting up against the seventh seeded Radwańska.

Both players had difficulty holding onto serves in the first set, resulting in the lead seesawing back and forth. After opening the match with a break, Pavlyuchenkova dropped the next three games before countering to take a 5-3 lead. Radwanska drew level at 5-all and again at 6-all, but saw the first set slip out of her hands after failing to convert on her set points at 6-5 and 7-6 in the tie-break.

Radwańska failed to take advantage of a good start in the second set. Having stormed to a 3:1 lead, she allowed the hard-hitting Russian to counter once again. Seizing on Radwańska’s growing unforced error count, Pavlyuchenkova won four straight games to assume a 5-3 lead in the set, and after failing to serve out the match, broke her opponent in the next game to secure a 7:6 (8-10) 6:4 win in one hour and 35 minutes.

The result was a huge letdown for Radwańska, who went into the match as a firm favourite, having throughout the tournament shown signs of the form that saw her achieve a career high singles ranking in August last year, when she broke through into the world’s top ten.

However, a sluggish performance littered with unforced errors and a general lack of urgency from the 20-year-old meant that her barren 2009 campaign continued. The Pole has now failed to make it through to a semi-final all season, having also suffered first round defeats in three of the six tournaments she has contested so far.

Meanwhile, Radwańska’s younger sister, Urszula, showed at the Paribas Open why many are billing her as a future top ten player. The 18-year-old, who defeated her older sister in their first ever professional encounter in February, entered the tournament as a wild card and managed to produce a stunning upset over world number eight Svetlana Kuznetsova on her way to the fourth round, where she was eventually eliminated by Caroline Wozniacki.

The Paribas Open went to fourth seed Vera Zvonareva, who completed the sweep of the singles and doubles titles after beating defending champion and former world number one Ana Ivanovic 7-6(5), 6-2 in the final.

In the men’s draw, Rafael Nadal underlined his world number one status after a commanding 6-1 6-2 victory over Britain’s top player Andy Murray. The Spaniard recaptured the Indian Wells title after previously winning the tournament in 2007.