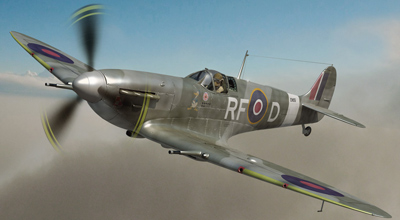 Talleyrand, Napoleon’s cynical minister, once claimed that a mistake in politics is worse than a crime.

Last month, the Daily Mail revealed that the far-Right British National Party was fronting its EU election campaign with a picture of a rather idiosyncratic Spitfire. The plane featured on the poster happened to be the personal mount of Squadron Leader Jan Zumbach, a fighter ace of the famed Polish Air Force 303 squadron.

Soon afterwards, Mr. Nick Griffin of the BNP claimed: “We have deliberately used a Spitfire from the 303 Polish Fighter Squadron as our backdrop in the ‘Battle of Britain’ road show for the European elections.” Deliberately, huh?

Whoever designed the BNP poster, he or she used – without permission as it turned out – a Spitfire picture created by Swedish graphic designer Anders Lejczak, who, ironically enough, is Polish-born. The plane nose in the graphic is blurred by the rotating propeller, which obscures the Polish red-and-white chequered national insignia, which was usually painted just below the engine exhausts. Perhaps that’s why the picture did not trigger any alarm bells at the BNP HQ?

Of course, the hapless BNP graphic designer probably didn’t have the faintest clue of the possible pitfalls. Over the 150 pages of my 1990 English book about the Battle of Britain, there is only one reference to Polish airmen: “…There was also a large contingent from the countries overrun by Hitler. These were led by the Poles, many of whom had experienced extraordinary adventures to get to England, and whose desire for vengeance gave them a unique aggressiveness in the air.” Period. A fair description, but a bit short, to say the least.

There is also one scene in the classic 1969 film Battle of Britain, in which a British commander instructs his Polish pilots to observe strict radio procedure in flight – “Don’t speak bloody Polish!” – only to realise that his wingmen had already engaged in dogfights with Messerschmitts.

During the actual BoB (summer and autumn of 1940), two Polish fighter squadrons were formed, consisting of experienced pilots who had fought in the Polish and French campaigns. The 303 squadron scored the highest number of enemy kills of all RAF (Royal Air Force) units.

As of 1945, the Polish contingents numbered nine fighter and four bomber squadrons, plus reconnaissance and special duty units. In 1946, the Polish squadrons were disbanded, and as Britain’s economy began to sink into post-war depression (few may remember that until the early 1950s food rationing was even stricter than during the hostilities), the former allies became an unwanted burden and were encouraged to leave Britain, a situation that is echoed in today’s crisis.

A few of those Poles continued to fly, like Jan Zumbach, who led a decidedly adventurous life, or Janusz “Żura” Żurakowski, who became a renowned test pilot, associated with the Canadian Avro “Arrow” supersonic jet interceptor program. The fate of Polish top-scoring fighter ace, Stanisław Skalski, was more gruesome. Like many other Polish servicemen, after returning to Poland he was arrested by the communist secret police, accused of espionage, tortured and sentenced to death, only to be released after the 1956 “thaw.”

While readers’ responses at the Daily Mail forum were generally ironic, ridiculing the BNP’s misfire, some were clearly offended by the words “Polish Spitfire” used in the title of the article. These people argued that there is no such thing, as the Spitfire was designed in Britain and built by British workers, no matter who flew the thing. This is very true of course.

Having read that, I lost myself in thought about Britishness for a while; then I took a quick look at my kitchen shelf, to discover two tin boxes labelled “English Tea.” Well, to be elaborately correct, there is no such thing either. Should the tea boxes include the following consumer information: “grown, reaped and processed by Indian or Chinese farmers”?

Without a pilot, a British-to-the-bone Spitfire was just 2.5 tons of metal standing dormant on the ground. Apart from the brave British pilots, it was flown by Poles, New Zealanders, Canadians, Czechs, Slovaks, Belgians, French, and Greeks, to name just a few. And they were all immigrants.

One thought on “Plane Ignorance”