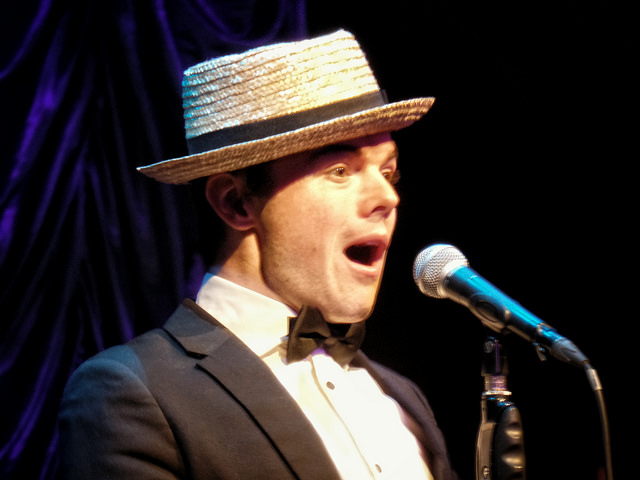 “Lawrence Welk with a hundred percent more twerking” is how Scott Bradlee describes his Postmodern Jukebox concept, and although that captures the irreverence with which he approaches the project, it may actually be a little disingenuous. Even in our post-Age of Irony world, where it’s become a kind of hipster thing to reimagine contemporary rock and pop standards in the style of jazz and big band, no one does it quite like this. Everyone from Lady Gaga to Radiohead to Guns ‘N’ Roses can get the Bradlee treatment, featuring a revolving cast of vocalists that has included such luminaries as American Idol runner-up Haley Reinhart and, in full character makeup, Puddles The Clown (from the band Puddles Pity Party.) Besides the novelty and kitsch factor, the musicianship is stellar, and arrangements imaginative.

Ronnie James Dio was, to many, the greatest hard rock/ heavy metal vocalist of all time. As founding architect of Rainbow (with guitar maestro Ritchie Blackmore), as well as midwifing the rebirth of Black Sabbath in 1980, he was responsible for no less than the invention of a more ambitious kind of hard rock, away from its blues-based origins into a more epic progressive style.
Sadly, cancer claimed Ronnie in 2010, but the classic music he left behind, from “Man on the Silver Mountain” to “Heaven and Hell” to “Holy Diver”, and so many more, lives on. This will be the third year that Warsaw band Scream Maker, with Exlibris keyboardist Piotr Sikora, is paying tribute to this legend, this year expanded to three cities across Poland.

Some of the country’s finest hard rock musicians will be joining in, and the event will be capped by a performance of Black Sabbath’s seminal Heaven And Hell album in its entirety.

Not to be confused with Arthur Lee’s legendary 1960’s San Francisco psychedelic band, this LOVE is an experimental sextet out of Copenhagen featuring a combination of Danish, Swedish, and Polish musicians. Loosely defined as free jazz, there are Far Eastern and Indian influences as well as a great deal of improvisation. They’ve been celebrated at jazz festivals the world over, and they sound like nothing else.

Although synonymous with the New York City ska punk scene of the 1980s, the only constant in The Toasters’ 35 year history is Englishman Robert “Bucket” Hingley, who founded the band there when managing a comic book store. Occasionally produced and joined (sometimes pseudonymously) by the great Joe Jackson, they were the first American ska band to be integrated both musically and racially, utilizing punk, rap, soul and Caribbean music, along the way influencing everyone from Bad Brains to No Doubt. All of which makes it just a little bit strange that their best known song, “Two Tone Army”, is primarily known as the theme for the Nickelodeon TV series KaBlam!

And if you’re looking to travel over the next week, or you just happen to be visiting any of the cities in the following link on the corresponding dates, there is a tour coming through Poland well worth your time, especially if you have a love for music of a dark, dramatic, and more atmospheric nature.
The show is headlined by Liverpool’s ANTIMATTER, whose latest album The Judas Table made a lot of Best Of 2015 lists (including mine), and they absolutely wowed the crowd at Rotunda last autumn. According to bandleader/singer/ guitarist/ songwriter Mick Moss, Poland is the best country for the band – in fact, he often comes over alone between albums for acoustic shows. The music has influences from metal to new wave to triphop to prog and then some, and so is therefore completely original. They are such a great live band that it would be well worth it were they playing alone.

But that ain’t all…

Appearing with them are two of the best Polish artists around, each featuring incredible female singers; Krakow’s NONAMEN are a progressive metal band, with vocalist Edyta Szkolut and violinist Marta Rychlik giving the band its own unique personality, while TRANQUILIZER pick up where bands like Dead Can Dance and Cocteau Twins left off and bring it into the 21st century, with the outstanding voice and presence of Luna Bystrzanowka. They are a magical experience live, and their debut album, Take A Pill, was #2 (to Riverside’s Love, Fear and the Time Machine) on my Krakow Post Best Polish Albums of 2015.

Check the link for details…