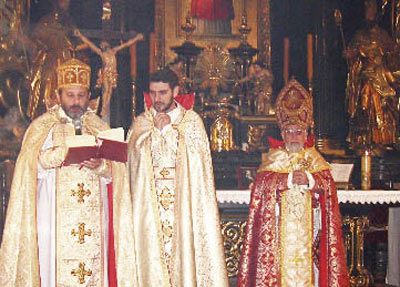 One and a half of the two million Armenians living in southern Anatolia were killed between 1915 and 1916. They perished under the heel of the Committee of Union and Progress, a body that represented Turkish nationalists in the territory of the Ottoman Empire, now Turkey, during World War I. Each year, Armenians in their country and around the world commemorate the anniversary of this tragedy on 24 April, when the arrests of Armenian intellectuals and the elite began in what is now Istanbul, formerly Constantinople. Krakow is also taking part in the tributes, and indeed, Poland has a rich seam of Armenian heritage that stretches back some 700 years.

During the Armenian genocide – the first genocide of the twentieth century – Turks and Kurds managed to exterminate almost every Armenian man in Anatolia (Asia Minor). Only those who ran away with the Russian army, were taken by French ships, or were already living beyond the reach of the Ottoman Empire, in the Southern Caucasus, survived.

The Committee claimed that it had to deport Armenians far from the current borders, so that they would not become a threat to the defence of the Ottoman Empire. But witnesses observed that the deportation was an intentional process of extermination by means of hunger, exhaustion, slavery, rape, torture and murder. Each time that the Armenian elite of a given city or village was summoned and murdered, whoever was left – mostly women, old people and children – were forced to march for miles to their new destination. During the march, young women were very often given to men who were actually involved in the genocide. These victims were typically sold as slaves or passed on to Kurdish or Turkish Muslim families. Many of these children were ultimately raised as Muslims. The rest – robbed, raped, tortured and starving, were directed into the desert of Deir ez Zor, now in Syria, where the survivors of the marches were left to die on the ground, with no food or water. The roads were littered with bodies which nobody cared to bury. As a result, skulls and bones soon became ubiquitous across the landscape.

Armenia, the first country in the world to adopt Christianity as its state religion, was originally located in the region of the biblical paradise. Mount Ararat, the highest peak in eastern Anatolia, is its abiding national symbol. It is from this mountain that the dove brought the olive palm to Noah, revealing that the water levels had begun to fall, and that the earth was ready to be reborn. The Armenians, a nation with a rich culture and their own original alphabet and language, typically dealt in trade, creating bourgeois and intellectual elites in many cities across Anatolia. However, from its beginnings, there was a constant struggle to maintain cultural identity and independence in the face of different empires and tribes. At various times, the Armenians fell under the influence and control of Persia, Alexander the Great’s Empire, the Byzantine Empire, the Mongols and finally the Turks, who created the Ottoman Empire, not forgetting the Russians. These circumstances very often forced Armenians to emigrate into the region of the Byzantine Empire, as well as to the Crimea, and further afield to Europe and Poland.

The Polish Armenian emigration began in the 11th century and its ancestors extend to eight thousand inhabitants today. Armenians were welcomed by the Polish King Kazimierz the Great in the 14th century, after the region that is now western Ukraine joined the Polish state. In exchange for legal autonomy, Armenians served for the common good of Poland, offering skills in diplomacy, architecture, trade or art. Recently, due to the fall of the Soviet Union and the Nagorno-Karabakh War held between Armenia and Azerbaijan in 1988-1994, Poland has gained a new Armenian emigration which, together with the old, extends to about 80 thousand people. Armenians in Poland, like other minorities, were able to develop their customs and traditions freely since 1989. Now, with the help of Krakow’s Armenian Cultural Association, under the presidency of Adam Terlecki, they are recreating their community.

Armenians in Poland and Krakow are also united in their original liturgy, led by the priest Tadeusz Isakowicz-Zaleski, a veteran of the Solidarity struggle, and a descendent of a distinguished Polish Armenian family. In 2004, Cardinal Franciszek Macharski sanctified the Khachkar, a traditional stone cross and sacred Armenian symbol, which stands near Saint Nicholas’ Church on Kopernika street in Krakow. The church was chosen because it stands on an ancient road to the south and the Black Sea, from where Armenians in Poland originally came, and also because the house of worship was partly funded by Armenian merchants. The monument was designed by architect Jacek Chrząszczewski, and it commemorates the victims of the Armenian genocide in Anatolia, as well as the Polish and Armenian victims of the Ukrainian Insurgent Army (UPA) that were slain during World War II, and Armenian priests killed by the NKWD, the Soviet secret police.

This year, a mass commemorating the victims of the genocide will be held in Saint Nicholas’ Church on the 25th of April, at 4 pm. Earlier, on the 18th of April, Tigran Vardikyana, an Armenian artist who has lived in Poland since 1991, will present a photographic exhibition called “Armenia Nearby – Armenia Close” at the Młodzieżowy Dom Kultury (Fort 49 “Krzesławice”, os. Na Stoku 27b), at 4 pm. Likewise, on the 27th April, the artist Mathieu Zeitindjioglou, who lives in France, and whose grandfather survived the genocide in Turkey, will present the documentary movie Story of the Son of an Olive Seller. It will be screened at Kino Mikro at 7:30 pm.

One thought on “Armenian Anniversary”