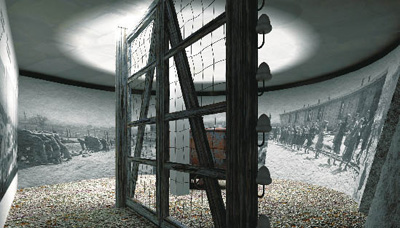 The centre-piece is yet to come, but the Oskar Schindler Factory has opened to the public after years of administrative wrangling. The Historical Museum of the City of Krakow has taken control of the project, and this autumn, an interactive exhibition will transport visitors back to the trying years of the occupation:

“The main aim of founding this museum is to present Krakow in the period of the Second World War: how Krakow was, what losses it sustained, and what role it played in Poland and Europe at that time,” Michał Niezabitowski, director of the city museum, told the Krakow Post.

“Up until now there has been no exhibition which shows the history of Krakow during this very difficult time,” he continued.

“The city completely changed its character following the years 1939-1945. Almost 30 percent of the inhabitants of the city – those who were Jewish – disappeared, and in all probability, they disappeared forever. We came through a traumatic experience – one which has had a strong impact on our history.”

Unquestionably, there will be a focus on Oskar Schindler himself, the German entrepreneur who saved over a thousand Jews from the Holocaust.

Oskar Schindler (1908-1974) took over the enamelware factory following the Nazi invasion of Poland in September 1939. The business was already defunct, but Schindler, who was in the pay of German Intelligence, sought to exploit cheap labour in an effort to turn the enterprise around. He persuaded Nazi authorities to allow him to house workers on site, ultimately transferring his predominantly Jewish workforce west in 1944.

A small exhibition about Schindler opened in the factory on March 15th, which will be complemented by more threads once the main section opens.

“We want everyone who visits this museum to feel that they are walking into the past,” explained Łukasz Czuj, co-author of the planned centre-piece.

Speaking with great enthusiasm about the project, he described how the design follows a labyrinthine form, with visitors moving though a chain of halls following the chronological progression of the Nazi occupation.

“We want to build an exposition that allows you to enter into the very drama of the city, so that you feel how the city is changing,” he said, adding that even the sounds and smells of the occupation will be evoked.

Like the acclaimed Warsaw Rising Museum, the Krakow exhibition will offer a modern, interactive experience. Dramatic episodes such as the mass arrest of Krakow professors will be rendered, as well as the emergence of resistance. Simulations of the ghetto and the Płaszów forced labour camp will evoke the magnitude of the Jewish tragedy.

“The exhibition will show the dramatic choices that people made,” Mr. Czuj explained. “But it should also prompt us to think ‘What would my decision have been?'”

Besides worthy historical heirlooms, the curators are also looking for more mundane items in an effort to recreate the atmosphere of those years.

“We have a vast amount of photographs and documents,” director Niezabitowski said, “but we’re lacking everyday, household objects from the occupation era,” he added. “These may not have great material value, but for us curators, they are very precious.”

One of the stumbling blocks in the regeneration of the factory thus far has been the sheer vastness of the site. In fact, despite the considerable scope of the current project, it will only utilize the former administrative buildings of the factory. These halls provide ample room for the curators’ needs.

The adjoining factory buildings – which resemble a string of air hangars – will house a museum of contemporary art, under separate ownership. This decision sparked some debate, with questions raised as to whether contemporary art was appropriate for a site so intimately connected with the Holocaust. However, it has been argued that a space that allows for free artistic expression is in itself a victory against the ideology of Nazism. Hitler’s regime banned countless artforms, with scores of brilliant artists denounced as “degenerate.”

Crucially, it is hoped that the creation of the two museums in Krakow’s Zabłocie district will help regenerate an area that is considered somewhat beyond the pale. The factory’s legacy enjoys exceptional publicity owing to Thomas Keneally’s historical novel Schindler’s Ark and Spielberg’s subsequent film, Schindler’s List. One section of the main exhibition will allow visitors to walk through Oskar Schindler’s private office, which will contain an “ark” of enamelware in tribute to the Jewish workers.

Schindler himself continues to provoke conflicting reactions. Lili Haber, President of the Association of Cracovians in Israel, has organised events in tribute to the industrialist, and her own father was saved on the list, along with two of her uncles. She talks with joy about the overwhelming success of a recent Polish exhibition in Jerusalem about the Jews of pre-war Krakow. However, she told the Post that her father resented the praise lavished on Schindler. “My father always told me that he was a womaniser and that he did it for the money. But of course, I would not exist had it not been for Schindler.”

Of the current developments at the factory, Mrs. Haber is optimistic: “I am glad that something is being done,” she says.

Director Michał Niezabitowski revealed that visits to Germany, Israel and the United States had been made in order to discuss the most appropriate manner in which to handle the legacy.

“Such a museum could be created elsewhere, but this is indeed an ideal place for such purposes. It is a kind of historical monument, and for this reason it is with immense good fortune that owing to the course of events, and also to the activity of the city authorities, we can realise the exhibition here.”