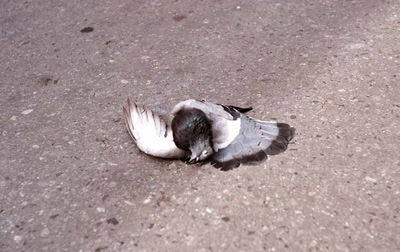 In a bold move, Krakow’s city council has implemented a programme designed to reduce the city’s winged menace: pigeons. Often a subject of complaint amongst locals and tourists alike, the common pigeon (Columbidae annoyinlae) is ubiquitous in the Małopolska region, often occupying the Market Square and other popular tourist attractions in droves. Beginning 1 May, the council will implement a programme dubbed “Shock and Squawk” (“Wstrząs i Skrzek”), in which citizens may exchange deceased pigeons for cash.

“The programme is very progressive,” explained Mateusz Kierewicz, a local councilman and the main proponent of the new legislation. “The city’s pigeon problem has simply grown too large to ignore, and we needed to find a way to motivate citizens to take matters into their own hands, so to speak.” Beginning next month, each person that kills and brings in a pigeon to a police station will receive 10 złoty cash, tax-free – and there are no limits to how many pigeons each person can bring in.

“Each year, the businesses around the Market Square spend millions of złoty on cleaning the mess left by these unsightly birds – and that’s not even counting the costs of treating the diseases brought on by contact with the winged rats,” elaborated Kierewicz. “This programme aims to reduce these costs, and may even stimulate the economy in this time of economic crisis.” City authorities hope that the extra money put in the pockets of hard-working citizens devoted to solving the pigeon problem will in turn stimulate spending.

According to the Cracovian chapter of the PPS (Pigeon Preservation Society), each year, up to 2.5 million pigeons visit the city, as it lies on a common migration path between the Baltic Sea and the Mediterranean. The Market Square alone sees 1.2 million specimens, primarily in the summer months.

When questioned by the Krakow Post, PPS spokeman Andrzej Gołąb stated, “We are appalled at this new legislation. Pigeon rights have long been overlooked in favour of cuddlier birds such as parrots or penguins, but the bird is an essential part of the region’s ecosystem.” Members of the PPS plan to stage a protest this Sunday by gathering in large groups on the Market Square and demanding chunks of bread.

The Krakow Post reminds readers to check the date of this article if they’re suspicious about its accuracy.