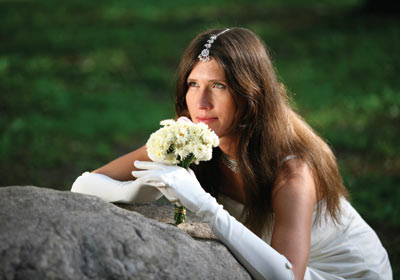 Katarzyna Majak, a graduate of the Poznan Academy of Fine Arts, is as much rooted in the photographic traditions of America (where she studied with such greats as Edward Weston’s grandson, Kim, in California, as well as John Sexton in Colorado) as in more Polish influences. Her latest exhibition brings her work to Krakow, in a show centring around a “cursed” wedding dress. The Krakow Post’s Anna Spysz sat down with Mayak in late January, as she was preparing her exhibition.

Krakow Post: Your newest exhibition is opening in March.

Katarzyna Majak: Yes, on the 6th of March is the opening, and then on the 8th we are planning to do something in town, some kind of performance. We don’t know yet exactly what it will be like. I hope to bring Mateusz Iwulski – a butoh dancer and a dear friend of mine, now based in Berlin, to Galeria Krakowska to perform in the Dress.

KP: Have you got anything special planned for the opening?

KM: There will be some music which was composed by Marcin Bociński, another friend of mine, especially for this exhibition, based on Mendelssohn’s Wedding March. This piece is from the album by Majak & the Unmarried, where my three unmarried friends and I sing music associated with weddings. Marcin composed two pieces for this album and produced it. We will play it at the entrance to welcome the gallery guests and create a kind of “introduction” to the exhibition. Then when people come in they will see the photographs and the video. So it will be music, video, photographs, and performance.

KP: Are these new photographs, or more of a collection of your previous work?

KM: It’s a theme I’ve been working on for quite a while now, but I’ve never really showed it except two pieces exhibited by Zderzak at ART FORUM Berlin 2008. It’s the story of a very special wedding dress. I received it as a gift “for luck.” I was supposed to get married but I didn’t, so I decided to do something with it and it evolved into this whole series of different pieces in different media. So this will be the first show in Poland of this series.

KP: So why did you choose Krakow for this, as you’re from Warsaw?

KM: I guess I didn’t really choose Krakow, Krakow chose me [laughs]. And this is a very good gallery and a very renowned one, so I felt the project itself is worth showing in a good place. And the owner [of Zderzak] liked it.

KP: Will it also be shown in other Polish cities?

KM: It will. I got an invitation from Poznań, where there is a photo biennial – the only photo biennial in Poland – and I will probably be a part of that in May. And then I also got an invitation from a curator to be part of a bigger show about clothing and the various meanings of clothing on people, especially on women, and it will be shown in several art centres in Poland.

KP: Your work has also been exhibited in the U.S. in the past.

KM: Yes, I was there a few times, and I was also there as a curator, when I curated a show on young Polish photography. It featured three young photographers and I had a show myself as well, because I was there not just as a curator but also as an artist in residence. My work was also shown in New Orleans as part of a show called “Odd Works” last year.

KP: Do you feel that the reception of your work has been greater in the States than in Poland?

KM: I have a few collectors in the States. I started in the States, rather than here. I don’t know how it works, but there is something in those pieces that they find special – I don’t know what this is, but I’ve had a positive response from them.

KP: That’s an interesting point, because it seems that a lot of Polish artists must first find a following or become known outside of Poland before they are acknowledged in their own country.

KM: This is quite an interesting thing. I think it’s because when you are there, you need to be active -more active. Here the art world is much smaller, but there you need to go out and be active yourself and meet curators and so on. Maybe that’s the thing. If I imagine I go to France, for example, I don’t know anybody, so I have to promote myself.

KP: What do you think about the art scene in Poland then – is it supportive of young or lesser known artists?

KM: It depends on who you know and who you meet and what you do. Poland is much more about painting than photography, and the culture of painting is very deeply rooted here. Photography has to make its own way, and this is the beginning of that. All over the world photography is number one, but here it still seems to be painting. So if you do photography, you have to work harder. But this is changing, and I’m very happy that it’s in the process of changing. Photography has now become much more sellable – people treat it more and more as an object of art rather than a reproduction that can be multiplied (so they might think it’s worth nothing because it’s copyable). When you have a painting, it is the original and there’s only one, but that is the nature of this medium. But, the situation is getting better and better for photography here, which is great.

Katarzyna Majak’s exhibition, titled “Desire,” will open on the 6th of March at 6 pm in Galeria Zderzak (ul. Florianska 3), and will run through the 18th of April. In addition, on March 8th, also known as International Women’s Day, a performance of butoh by dancer Mateusz Iwulski will take place in correlation with the exhibition at 4:30 pm in Galeria Krakowska.