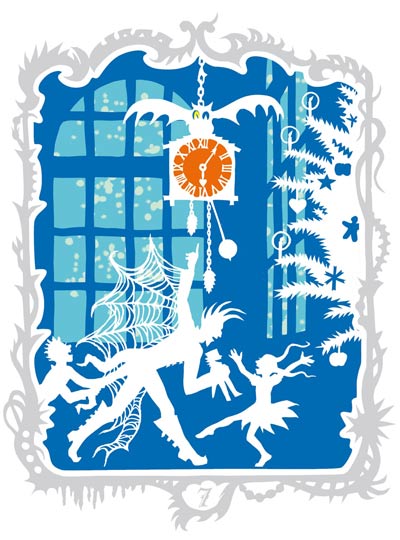 London is not the first city that leaps to mind when one thinks of the snow swept romances of fairy tales. But artist Jan Pieńkowski, who has lived in the English capital for most of his life, had another world to draw from when he began Nut Cracker, his latest book. Sifting through the family albums that had been saved from the wreckage of the Second World War, he transported himself back to the Poland of his childhood.

Still little known in the land of his birth, Pieńkowski has long been one of Britain’s most celebrated illustrators. Meg and Mog, his classic about a clumsy witch who can’t get her spells right, has sold three million copies in Britain alone, and has since stretched to 16 titles. Likewise, his rip-roaring pop-up books Haunted House and Dinner Time revolutionised the genre.

Perhaps not entirely surprisingly, Pieńkowski’s ambitions were considered wildly eccentric in the sober world of 50s Britain. Having won a place to study Classics and English at Cambridge, his tutors nearly had a heart attack when he suggested transferring to architecture, the more artistic option. He was refused. Likewise, having finished his studies, ad agencies were dumbfounded that someone with a degree actually wanted to work in the arts department. In those days, certain professions were simply not the done thing. However, in 1971 Pieńkowski scooped the prestigious Kate Greenaway Award for illustration, and since then, he’s never looked back.

One of the first books that I remember from childhood is the pop-up Haunted House, which was one of my most treasured possessions. Was it a rewarding project to work on?

Yes, I’ll say. When I started, I had absolutely no idea of paper mechanics, except making Christmas Tree decorations and paper models of trams in Poland as a child. I decided the book should be a tour of an old fashioned English house, from an Agatha Christie thriller. I made the first dummy for Haunted House out of an old Corn Flakes packet and lots of sellotape and much bad temper. I then was offered the services of a brilliant Norwegian paper engineer, Tor Lokvig, who came from Los Angeles and worked with me for a week on polishing up the paper mechanics. Then I went to Colombia and worked with a brilliant production engineer, Inez Calvache. I remember one night we worked until three o c’clock in the morning when we were trying to stop the spider in spread one from getting trapped in the bannisters. I loved the whole job. It embodied my childhood terrors and laid a few ghosts to rest at the same time. I am still proud of it to this day.

It was fascinating to hear that a breakthrough in Nut Cracker came when you bumped into a clan of Goths in Germany. Does a lot of your inspiration come from happy accident?

When I make a “mistake” or blot on the artwork, I try to incorporate it in the finished result as a welcome innovation. The Goths are a perfect example. For Nut Cracker we went on a tour of Saxony because of the Polish connection, Augustus The Strong, and the fact that my mother’s family claimed to have come from Zgorzelec/ Görlitz. We happened to arrive at Leipzig on the day of the annual “Gothic Wave Treffen.” The Goths were elegant and utterly charming – I particularly remember a young Gothic couple all in black having a cup of coffee in an outdoor cafe, with the man rocking a contented little Goth baby in its carriage.

Although you have lived in England for most of your life, it seems that Poland provided a lot of inspiration for your work – the stories that you were told about a witch, the snow swept winters of your childhood, the “Straszny Dwor!” Could you tell us a little about this?

The stories about the Baba Jaga [the archetypal Slavic witch] were told to me by our neighbour’s wife, who sometimes looked after me, Pani Kobuszewska, who used these terrifying stories to induce me to drink my boiled milk, a bit like Sheherezade, only more frightening. I have used the house on the chicken’s foot several times in English stories [see picture left], and I think that the Baba Jaga was the inspiration for Meg. Perhaps I invented her to purge my childhood terrors. The winter snow with the contrasting dark figures has probably prompted my affection for silhouettes which are so popular throughout central Europe from Switzerland to Poland. My father did have a dwór but I don’t think it was at all straszny. I remember very little about it, except the garden and the dogs. Perhaps it was my father’s stories of the old house that were subsequently echoed in The Haunted House in 1980.

Where exactly was your family home?

My father’s house was in Podlasie, an old wooden manor house with a park going down to the River Bug. That part of Poland is infested by Pienkowskis, going back to the late Middle Ages. Of the house nothing remains; the landscape is as beautiful as ever.

For many Polish exiles during the 1950s and onwards, there was a sense that a certain world was lost forever. How did Poland appear in your mind’s eye as a young émigré growing up in England?

I don’t think émigré is the right word; I was three years old when Poland lost her independence. I was seven during the whole Warsaw Rising. In September 1944 the city was flattened and we were transported to the Reich. I spent a year in wartime Bavaria before being liberated by US troops and taken to Puglia in Southern Italy to join up with the Polish Second Corps for a year and a half, and was eventually invited by the British Government to settle in England, which I have been grateful for ever since.

As for my memories of Poland, I was brought up in the country, first in my father’s house and, once the war started, in Płockie, in idyllic countryside where the chief attractions were the woods, the pond and the blacksmith’s shop. I was surrounded with horses, farm animals and poultry and the odd orphaned baby deer or fox which my father brought from the fields and we looked after. This picture of Poland had hardly changed by the time I saw it again in 1960. What had changed drastically was the picture of Warsaw, where I used to visit my grandmother and my uncles and aunts, which I saw being totally destroyed in 1944 and then partly rebuilt in 1960 in a rather alien Soviet style. Even now, I see it pretty clearly as it was when I was a child, when the greatest treat would be a ride in a horse cab or a cake in Nowy Świat, where by the way I was when the first shot of the Rising happened on August 1st, 1944.

Britain has a rich tradition in illustration, from Tenniel to Quentin Blake. Which artists do you admire and why?

John Tenniel’s immortal Alice. Aubrey Beards-ley’s devastating Salome. Cecil Aldon’s irresistible dogs. Mervyn Peake’s unfinished Bleak House (he used to teach me at the Central School in London). My heroes don’t have to be English. I admire Lotte Reiniger’s masterly shadows. I was also very keen on Gustav Doré, whose book Londres about the splendour and squalor of 1880s London foreshadows the social divides of today.

What do think the secret is in creating a good illustrated book for children?

I think it must be a bit like writing a song: there’s the tune and the words. They’re both equally important, and it’s hard to know which comes first. In the case of Gilbert and Sullivan, they came together, although they both loathed each other ’till the bitter end! The fact they loathed each other didn’t stop them producing marvellous tunes and lyrics that are still going today.

As a Brit living in Krakow, I quickly fell under the spell of the local folklore – the Krakow Dragon, Pan Twardowski, the noble trumpeter who saved the city from the Tatars! The list is endless. Have you ever felt inspired to illustrate a collection of classic Polish tales?

Yes I have. The only thing is, I’m not entirely sure what source would be best – I work with my eyes, so I don’t like reading, and I would prefer something I could listen to, read by good people. Your recommendation would be most welcome.