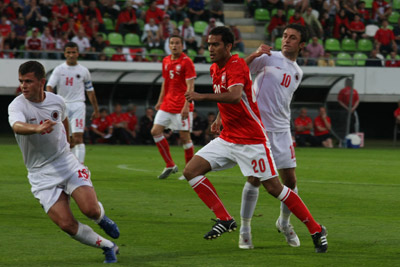 A piece of Brazilian magic led Poland to victory over Wales, and proved to be the highlight of an otherwise lacklustre showing by the national team during two international friendly matches played in February. São Paulo born Roger Guerreiro, given Polish citizenship last year to allow him to play in Euro 2008, produced a sublime lob to secure a 1-0 victory in what was the last match of Poland’s preparations for the upcoming World Cup qualifiers against Northern Ireland and San Marino.

Poland coach Leo Beenhakker will have a lot to contemplate before these crucial fixtures, as his side failed to impress against the Welsh, while an experimental line-up proved ineffective during an earlier 1-1 draw with Lithuania.

Beenhakker fielded a team comprised only of players from the Polish Ekstraklasa for the Lithuania game, and the inexperienced outfit looked out of place on the international stage.

Shaky in all aspects of their play, the Poles were particularly guilty of poor positioning and inaccurate passing during a dull encounter that produced little goal mouth action. One of few positives was yet another solid display by Paweł Brożek, who has all but confirmed himself as the national team’s first choice striker. His cool finish after 11 minutes gave Poland the lead, and he backed this up with some impressive one touch plays with Wisła Krakow teammate Rafał Boguski.

Brożek also featured prominently in the win over Wales, although it was second half substitute Guerreiro who stole the show. The Legia Warsaw playmaker latched onto a long ball from Marcin Wiesilewski 10 minutes from time, before looping the ball over Boaz Mayhill into the top corner of the goal.

Although an improvement on the Lithuania match, Poland struggled to assert any dominance over a side rated 37 places below them on the FIFA rankings, and were put under consistent pressure in the first half.

Led by Manchester City’s £14 million signing, Craig Bellamy, Wales created a number of opportunities and were unlucky to go into the break on level terms. After 19 minutes, Bellamy used his pace to skip ahead of the Polish defence, before producing a fine chip that was cleared off the line by Micha Żewłakow. The Welsh captain was in the action again in the 33rd minute, as his in-swinging cross was met by a Jo Led-ley shot that beat Łukasz Fabiański, only to crash into the bar.

Poland responded through efforts from Rafal Murawski and Robert Lewandowski, with the latter squandering the best chance of the half after failing to beat Wayne Hennessey with a shot from the edge of the box.

Both coaches made numerous changes at half time and this seemed to affect the fluency of the game, with neither side able to take control and build pressure on the opposition. As a result, there were few goal scoring chances, until Guerreiro’s moment of magic secured victory for the Poles.

Looking ahead, Poland will square up against Northern Ireland in Belfast on March 28th, before returning to home soil and facing San Marino in Kielce on April 1st.

Meanwhile, the turbulent relations between the Polish Football Association – PZPN – and Leo Beenhakker have yet again overshadowed on-field matters, following the Dutchman’s announcement that he will combine his duties as Poland coach with the voluntary role of technical adviser with Dutch club Feyenoord.

PZPN president Grzegorz Lato immediately criticised Beenhakker’s decision, saying that the 66-year-old had enough on his plate as national team coach ahead of the crucial World Cup qualifiers.

Beenhakker disagreed. “Given the Polish team’s schedule, my free time is pretty flexible, so I can combine these functions perfectly,” he said during a press conference in Rotterdam.

The Polish media was quick to speculate on a pending resignation by Beenhakker from his duties as national team coach, after the Dutchman gave strong signals that he is tiring of his fractured relations with PZPN.

Asked by Gazeta Wyborcza if Poland may go into the March 28th qualifier against Northern Ireland with a new coach, the Dutchman replied: “anything is possible.”

With thanks to Grzegorz Jereczek for his photo.