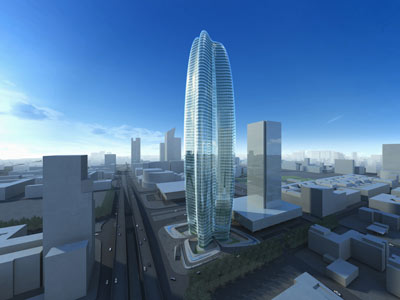 During a time of recession, often only the cheapest and most modest building projects have a chance of realisation. Due to the global financial problems, the 250 metre tall Lilium Tower designed for Poland’s capital was put on hold, announced the project developer in January.

Lilium Tower was not the first victim of the global crisis in Poland. At the end of 2008 the property developer faced problems that affected the Sky Tower investment in Wroclaw. The investor wanted to go ahead with the Sky Tower but had difficulties raising the finances and would have faced problems selling the space. He has delayed the project for six months and hopes that in May things will be better.

The Sky Tower project is a complex of five buildings including the 258 metre tower. The total apartment area is over 66,000 square metres. Over half of the flats are located in the tower. There will also be a shopping mall with over 120 shops covering an area of 20,000 sq. metres. A similar space will be occupied by offices. The complex will have a four-storey car park with 2,000 parking lots. Over 10 000 sq. metres is designed for leisure facilities: a tennis court, a 25m swimming pool, a modern spa centre, and an indoor golf centre. Wroclaw’s skyscraper will also house a medical centre and a nursery school. The Sky Club, situated on the top floor (217 meters), will offer the residents of the tower a panorama of the city. At first, the building was scheduled for occupancy in mid-2011, but now nobody wants to give a precise date.

The same problem faces the Lilium Tower’s developer in Warsaw. The Tower is a lily-shaped, 250 metre high luxury apartment hotel and residential building that will become a unique addition to the skyline of Poland’s capital. Designed by Zaha Hadid, who was the first woman ever to win the prestigious Pritzker Architecture Prize back in 2004, the structure is planned to be built in the centre of the city adjacent to the Marriott Tower, and opposite the Warsaw Central Railway Station. The composition of the Lilium Tower creates a progressive and prestigious residential building for the 21st century. Sleek in form and wrapped in glass, the skyscraper boasts a design based on a fleurde-lys motif. With a total floor space of 101,205 sq. metres, it will house apartments, a condominium hotel as well as commercial and recreation facilities.

According to initial plans, it was to have been completed by 2012, but the global crisis has changed everything. Kalman Surfin, president of Lilium Polska Sp. z o.o. could not even answer the Gazeta Wyborcza daily’s questions about when the construction will start. “The situation on the market must improve. Firstly, banks must begin giving credit for real estate investment and secondly, the apartments must be pre-sold. There will be around 600 suites and it is necessary to make a reservation at least for 150,” he added. The total cost of the Lilium Tower investment is estimated at around 400 million euros.

High-rise buildings are also in the works in the north of Poland. Invest Komfort is finishing construction of the 138 metre high Sea Towers in Gdynia. Another developer, Hossa Investment Group, has planned to build a residential apartment even 50 percent higher. The 202 metre high Big Boy Building will be one of the highest skyscrapers in the country and the highest in cities located on the Baltic Sea. The designers have provided for a sea view from each window of the building. But will it be built or delayed like the other projects? We won’t know the answer until confidence returns to the development market.