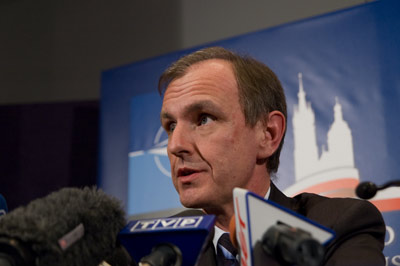 Fresh doubts surfaced over the future of Poland’s long-awaited missile shield following the NATO meeting in Krakow late last month, as U.S. Defence Secretary Robert Gates underlined President Obama’s pledge to re-evaluate diplomatic ties with the Kremlin ? despite Russia’s absence from the two-day conference. The original proposal for the shield ? signed in August 2008 by former U.S. Secretary of State Condoleezza Rice and Foreign Minister Radosław Sikorski ? confirmed the deployment of 10 interceptor missiles in Poland, and included assurances from the Bush administration for “substantial assistance to support Poland’s military modernisation efforts.”

However, following Barack Obama’s election victory, his initial refusal to commit to the project, and Russia’s reversal of plans to deploy Iskander missiles in Kaliningrad to counter the missile shield, some critics believe Obama may consider scrapping the proposals altogether in order to secure a new arms control deal with Moscow, as well as to save money.

U.S.-Russian ties have deteriorated as a result of the plans for the shield, with Moscow seeing it as a threat to their national security, but President Obama’s new administration has said it wants to “reset” the relationship with President Medvedev’s government and start anew.

Warsaw raised concerns prior to the NATO summit at a security conference held in Munich, which was attended by American Vice President Joe Biden, with Prime Minister Donald Tusk telling reporters, “I will definitely tell Vice President Biden we are ready to participate in this [missile shield] project, a U.S. project. When we agree something with our ally, we keep our promise.”

Biden responded by saying, “We will continue to develop missile defences to counter a growing Iranian capability, provided the technology is proven and it is cost-effective,” but reiterated that the work would only continue “in consultation with our NATO allies and Russia.”

Under-Secretary of State William Burns continued with Biden’s rhetoric, telling news agency Interfax: “[Washington is] open to the possibility of cooperation, both with Russia and NATO partners, in relation to a new configuration for missile defence which would use the resources that each of us have.”

Russian Foreign Minister Sergei Lavrov welcomed the comments, stating: “It’s not too late. We could sit down at the negotiating table and evaluate the situation.”

Despite the United States’ non-committal stance towards the shield, Gates signed an agreement with Poland during the NATO conference, confirming a new military cooperation that formalised the relationship between both countries’ special forces.

“As an old Cold Warrior it is a true honour to be able to sign this document on behalf of the United States,” he told Polish Defence Minister Bogdan Klich.

However, following Russia’s war with Georgia last summer, Poland will be hoping that Moscow’s influence over the missile shield will be minimal and that the United States will not abandon one of its staunchest allies. Nevertheless, Gates said the economic crisis and the wars in Afghanistan and Iraq have taken precedence ? leaving Warsaw with no option other than to keep on reminding Washington of their close relationship, and the signed agreement.

“Between the economic crisis, Afghanistan and Iraq the administration has not yet reviewed where it is on a whole range of issues including relationships with our allies, the missile defence programme [and] the relationship with the Russians,” said Gates.

Following the talks with Gates, Klich told TVN24, “We have to wait as the American administration works out its view on the future of the missile defence project.

“What’s left for us to do: to underline and remind people that Poland accepted the American proposal, that last year a deal was signed… and that the agreement binds both sides.”