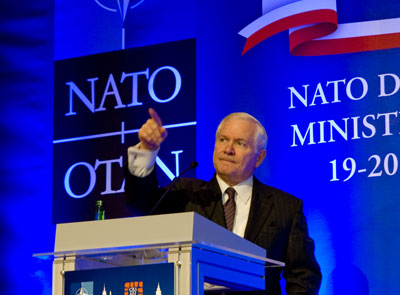 Friday the 19th of February was an extraordinary day for Krakow residents. Almost the whole city centre was shut down because of various political events that required special security measures. NATO’s informal summit was only one of various meetings that were held that day. Krakow’s think tank, the Institute of Strategic Studies, in cooperation with NATO’s Public Diplomacy Division hosted a two-day conference on Euro-Atlantic security titled, “NATO before the Jubilee Summit ? Does the Alliance Need a New Strategic Concept?” In the afternoon, various anti-globalisation groups and anarchists gathered on the Market Square to hold their “anti-summit” and express disapproval against NATO’s military policy. Moreover, earlier that day over 1,500 policemen protested against the government’s plans concerning the cuts in early retirement privileges. In the evening, Polish Prime Minister Donald Tusk organised a reception at the National Museum where he welcomed distinguished guests of the NATO Summit, including U.S. Secretary of Defence Robert Gates.

Towards a new strategy

Clearly the most important rationale behind NATO’s meeting in Krakow was to set the stage for the 60th anniversary summit that will be held by the Alliance in April. But the policy-makers that gathered in Krakow also raised issues of vital importance for the future shape and role of NATO. They included a need for a new NATO doctrine, NATO’s mission in Afghanistan, tightening the cooperation between the United States and its European allies, responding to terrorism, climate change and the energy crisis. For the Poles, the summit represented a good opportunity not only to show their commitment to the Alliance but also to reflect on Poland’s experiences in the organisation on the 10th anniversary of its accession.

One of the main themes discussed during the NATO summit and conference was a call for a brand new “strategic concept” for the Alliance. Ten years have passed since NATO endorsed its current security doctrine, which obviously could not have included the threats and developments of the present day such as the September 11th attacks, the wars in Afghanistan and Iraq or the energy security crisis. Therefore, it was no surprise that high-ranking officials referred to “the future of NATO” with mantra-like repetition. NATO Secretary General Jaap de Hoop Scheffer stressed that “NATO cannot rest on its laurels” and that it should “try to find the answers to the new challenges.” Prime Minister Donald Tusk also evoked the importance of NATO’s reform in his welcoming remarks, saying that “it should be a reform that would allow NATO to respond to new threats and challenges in an effective way.”

NATO is at a crossroads. It will celebrate its 60th anniversary summit next month in Germany and France. And of course, there are plenty of reasons to cheer, as NATO is believed to exemplify the most successful military and defence alliance in modern history. However, there are some hard questions that NATO needs to address. The Alliance is undertaking a visible transformation, with the change in the position of Secretary General later this year, the enlargement of the organisation (up to 28 members) and the welcoming back of French military forces into NATO structures. But the most crucial question concerns the so-called “out-of-area” operations conducted by NATO and the greatest challenge in this realm of activity: Afghanistan.

If there is one problem that may endanger the future of the Alliance, it is its mission in Afghanistan. NATO partners were obliged to consider this fact as the war in Afghanistan was discussed at length both at the summit and during the conference. According to a common belief among many security experts, if NATO fails in Afghanistan, it might mark the end of the Alliance. Sceptics on both sides of the Atlantic have already heralded the demise of NATO. In the United States, the questions that have repeatedly been raised demand larger military and financial contributions from European countries. Security is not free, and therefore, European members of NATO should really take their responsibilities seriously, runs the argument. On the other side of the pond, critics blame the United States for using NATO as a political and military tool of its diplomacy, disregarding its European allies. According to this view, Americans tend to overestimate “hard security” issues (like military pre-eminence) and sometimes forget about “soft security” (i.e. peacekeeping missions, development and public diplomacy).Those differences in transatlantic relations have been the subject of debates for many years, but they returned with a vengeance during the Euro-Atlantic dispute over Iraq, and right now they seem to be taking their toll, especially as the situation in Afghanistan worsens.

The administration of President Barack Obama has recently been working on a new strategy for the war in Afghanistan. It would be beneficial for the future of the Euro-Atlantic alliance if NATO is able to contribute more resources in this conflict. As Secretary Gates said before arriving to the summit, “the administration is prepared (?) to make additional commitments to Afghanistan. But the reclearly are expectations that the allies must do more as well.” This wish seems to be shared by the outgoing NATO Secretary General. During his remarks at Krakow’s National Museum, Mr. Scheffer pointed out that in his opinion, “the values NATO has always defended since its start in 1949 [are] those same values we are defending at the Hindu Kush.” He referred to Poland as “a staunch ally,” and noted that the Polish Armed Forces are “upholding the values of alliance” in Afghanistan. The question that remains unanswered is whether NATO allies will be eager to make more sacrifices in the name of common values in spite of the political costs of the Afghan conflict.