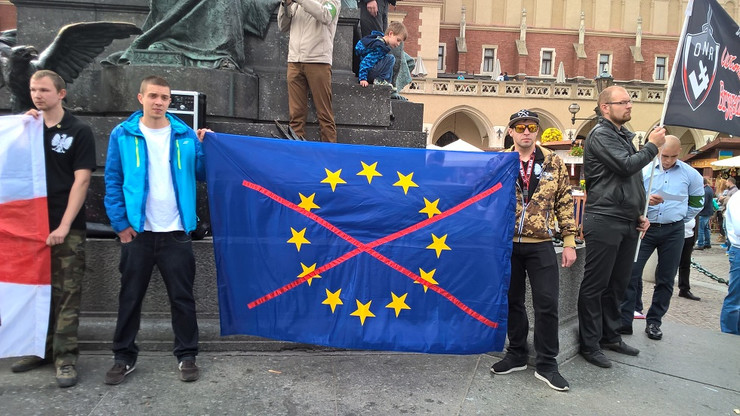 POLexit on the Main Square

On Sunday a demonstration called POLexit took place on Krakow’s Main Square. Protestors hoped that the demonstration would help shed light and awareness on the critical aspects of Poland in the European Union. “The European Union helps form a super monarchy, a federal country, the United States of Europe. We do not want this to happen, countries lose their national identities in the process.” said Tomasz Kalinowski, one of the protestors and spokesperson for ONR (Obozu Narodowo-Radykalnego). This protest in Krakow is just one of a series of demonstrations, the next one will take place in Warsaw on May 3rd. [Radio Krakow]

Vandals on spree in Nowa Huta

Broken windows, destroyed road signs, demolished trashcans – these are just a few things discovered in Nowa Huta last night. At around 3 am on Saturday municipal police were called out on a report that a group of young men were destroying property on Władysława Jagiełły Street. Upon arrival the suspects were waiting at a destroyed bus stop, claiming to have no part in the crime and rode away. Shortly after a bystander identified the men as the culprits. They were taken into custody at the next bus stop. [Onet]

One thought on “Krakow News 1 May 2016: POLexit on the Main Square / Group arrested in Nowa Huta”