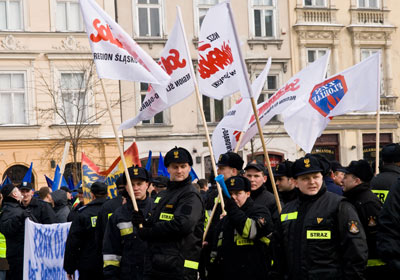 On February 19th, the same day that defence ministers were gathering for NATO meetings less than a kilometre away on the banks of the Wisła, Krakow’s Market Square witnessed a different kind of gathering – one that may not have been greater in scale, but was undoubtedly greater in volume.

Whistles, gunshots, and timeworn air raid sirens wailed as hundreds of policemen and other uniformed officers from throughout the country assembled in protest. Even the military police, a branch once feared by most of the country in darker times, gathered alongside to show their solidarity – quite literally in some cases, as several groups flourished flags bearing the trade union’s iconic logo.

But the timing of the event was not a coincidence. “We knew there would be many politically-conscious people in Krakow today [because of the NATO conference], so we used this to our advantage,” a protesting officer from the Greater Poland Voivodship police told the Post. Next to him, a young officer disguised in a white Santa Claus beard hunched over, leaning on a comical cane like a retiree, and hissed, “People, I will protect you!”

In fact, most of the protest centred on retirement benefits. The primary motivation behind the rally was the Ministry of Interior and Administration’s proposed changes in the law regulating the retirement of Poland’s uniformed servicemen. Under the current law, officers may retire at age 55 after serving at least 15 years and still retain 40 percent of their pay; the new law proposes to up the amount of service required to 20 or even 25 years for all those who joined the services on or after January 1st 1999.

The protest, which began in the Market Square, culminated in a march to the Małopolska Voivodship Office. There, the office was presented with a petition addressed to Prime Minister Donald Tusk. Finally, the officers paid their respects and laid flowers at the Tomb of the Unknown Soldier on Matejki Square.

An estimated 2,000 officers took part in the demonstration. The proposed changes would affect all branches of the uniformed services, so it was no wonder that besides policemen, one could spot border guards, firemen, prison guards, military police and the ubiquitous city guards, some of whom were also serving on the other side, ensuring that the protest did not get out of hand.

Protesting officers carried banners bearing quotations by Donald Tusk and Adam Rapacki, respectively, stating: “…a well-paid police force will care for our safety” and “…you cannot change the rules in the middle of the game.” Perhaps the most creative sign resembled a sale advert one might find at Tesco, reading, “SALE!!! 25 years of service, 55 years of life, FREE funeral in the package.”

Meanwhile, another protest took place simultaneously in Gdańsk, where over 3,000 officers took to the streets. However, Vice Prime Minister Grzegorz Schetyna was dismissive of the value of the demonstrations, telling the PAP press agency that “the protest against implementing retirement reforms stems from ignorance.” He stressed that those hired before 1999 would still benefit from the old system.

When speaking to Zenon Włodarczak, a former officer and spokesman also known as the “Subiekt” or “Salesman” of the police, the overwhelming theme I heard was that of a lack of communication between law enforcement, law makers, and the public. “We want to be heard, to be counted. We are the voices of all the uniformed services – we are all the same, and we are all serving the public, so we want the public to hear us.”

But there are deeper grievances. “We want an end to the media manipulation which constantly sets the police in opposition to the public,” Włodarczak continued. “We are not against reforms in general, we just do not want pseudo-reforms made by incompetents who are only looking [at policy] through an economic prism. We want reform that is constructive and based on social needs, not political advantages.”

Perhaps at least those witness to this protest will be convinced of the good natures of these men, as they exchanged pleasantries with passers-by and joked as they photographed their colleagues. But ultimately those in government will decide their fates; however, bearing in mind Prime Minister Tusk’s above-mentioned statement, it is important to remember that this decision will affect us all.